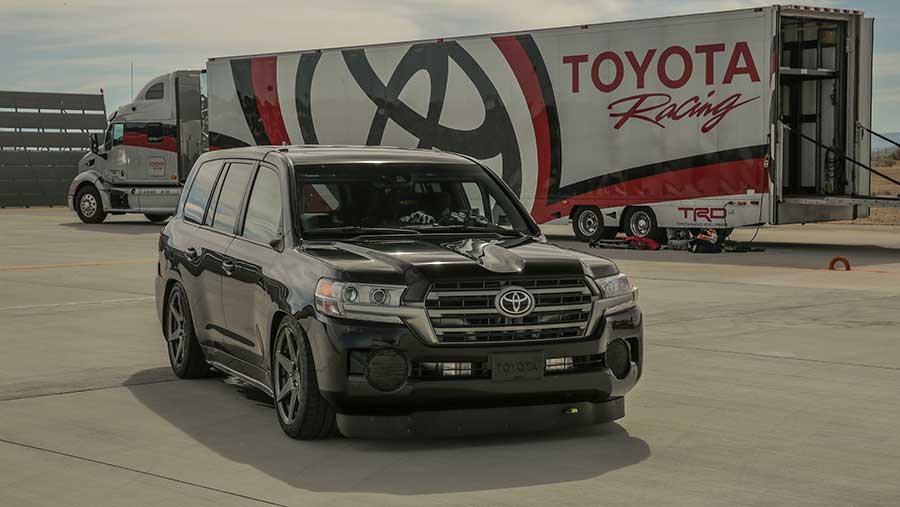 Toyota’s Land Cruiser might be renowned as one of the world’s toughest SUVs, but it is also now one of the fastest after clocking 230mph in California.

The custom-built Land Speed Cruiser, piloted by Nascar racing driver Carl Edwards, was treated to some serious upgrades prior to the record attempt.

Its V8 engine was tuned to 2,000hp, which helped it beat the previous record by 19mph.

In fact, Toyota reckons the Land Speed Cruiser could have gone faster than its verified 230.2mph if it hadn’t run out of tarmac on the 2.5-mile runway at the Mojave Air and Space Port.

The vehicle started life as a standard US-specification Land Cruiser, before being heavily modified by a team of engineers at the firm’s Motorsports Technical Center.

A pair of volleyball-sized Garrett turbochargers, capable of producing up to 55psi of boost, were added to the regular 5.7-litre V8 engine that features in the North American Land Cruiser range.

To cope with this extreme level of forced induction, the engine’s internal parts were strengthened, including the pistons, rods and a custom-made intake manifold.

The challenge of feeding all that power to the wheels was met with a purpose-built racing transmission, engineered to withstand the exceptional stresses generated by high power and speed.

Toyota also lowered the body to reduce the amount of turbulent air passing under the car. The frame was reworked to accommodate the best-possible suspension arrangement and made three inches narrower to make room for wider Michelin Pilot Super Sport tyres.

Unfortunately, UK customers will have to settle for the standard version, rated to 109mph from its 174bhp 2.8-litre D4D engine.