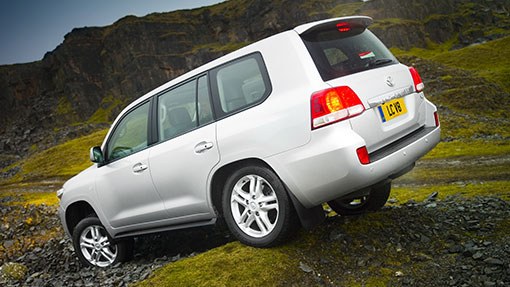 Packed with toys and pretty much unrivalled off-road ability, the V8 Land Cruiser is one of a kind. It also subtly flicks a middle finger up at badge-conscious Range Rover owners. Only a handful are sold each year, so if you’re less bothered about looks and more about off-roading performance then this might be the motor for you.

Four-wheel drive cars are going through a phase of fast-tracked evolution. It might have taken five million years for the crude, hairy ape to evolve into a (debatably) intelligent human, but a five-year spell has seen big, heavy and thirsty 4x4s transform into lighter and cleverer alternatives.

Why? Townie-type buyers have realised they don’t need to shell out thousands of extra pounds to get a car with off-road ability when they can buy an SUV that just looks like it can do the dirty stuff. Off-roading is rarely at the top of the priority list anymore.

But there are still a fair bunch of us that need to venture out of suburbia. That’s why the V8 Land Cruiser has continued to defy evolution and remains Toyota’s toughest road-goer.

Called the Amazon in its previous incarnation, Toyota has given the V8 some interior TLC to make it a genuine rival to the Range Rover. Its only problem is the badge on the front – apparently it’s not cool.

Toyota hasn’t overdone it on the styling front, which should make sure it doesn’t appeal to too many of those gangster types. Nor badge snobs, for that matter.

Instead the super-sized components give it an air of invincibility. Slabby doors are big and heavy, the front end stands above everything else in the car park and child passengers will need a stepladder to get it.

The generic looks also lend themselves to the inevitable bumps and scratches it’ll get over time – these guarantee it will have a bit of character come the end of its life.

But inside it’s smart and rammed full of goodies – it has to be if Toyota are going to justify charging £65,000. Interior space is abundant and passengers in the second and third rows shouldn’t be short of space for legs or heads.

A big car calls for a big engine. A 4.5-litre V8, with 282hp on tap, should help the Land Cruiser bulldoze its way across continents.

That team of horses drives through a six-speed auto box, and there are switches on the centre console to manage the diffs and low-range gears.

It’s reasonably rapid, too, and almost defies physics to drag its 3t body up to 62mph in less than nine seconds.

The consumption figures don’t make easy reading, though. At best I managed 24mpg on a long jaunt to Manchester, but the average was closer to 18mpg and would probably bring a tear to the eye of climate change campaigners.

Toyota sticks with an old-school design underneath – the separate chassis harks back to the days of fixable 4x4s – rather than the monocoque structure of newer cars.

That’s great if you like simplicity (hence why the Cruiser is so popular in Russia and the Middle East), but it’s less likely to appeal to the mass market.

It also means the Cruiser’s road handling has nothing on modern, rivals like the Audi Q7, or new X5. There are still some plus points, though – Toyota fits active dampers that can be set to sport, standard or comfort, which makes it more versatile than you might think.

You can hear the rumble of the tyres on the road, but only because the engine is so quiet when cruising. Acceleration is a different story and the bus-like roar can get annoying.

Off-road controls are clustered on the centre console. Air-suspension is an off-roading must-have if you can afford to spec a car with it (although there’s no choice with the Cruiser – only one spec is available in the UK).

Active ride control lets you pump the car up or down depending on the need for ground clearance. There are various other settings, too, which set it apart from almost everything on the market when it comes to off-roading.