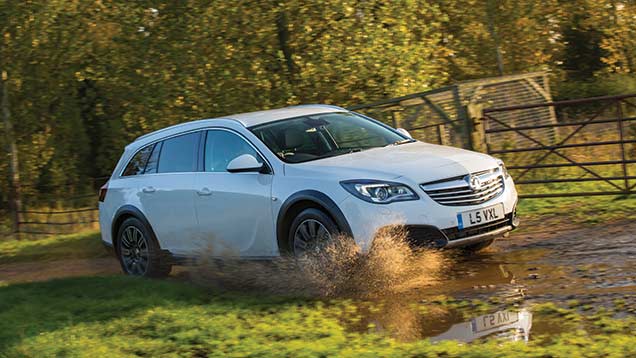 They come in the shape of Audi’s A4 Allroad, or its German chum the VW Passat. These are esteemed rivals, but what Vauxhall lacks in badge appeal it makes up for in price.

Do the maths and you could keep more than £5,000 in your pocket by buying it over its four-ring rival, or £2,000 when you put it nose-to-nose with the Passat. Put aside the badge snobbery and the Brit also happens to be better looking than the pair of aforementioned Germans (no surprise there, then).

Until last winter the carpet salesmen and Highways Agency staff – the Insignia’s bread-and-butter market – dared not venture too far from the beaten track.

However, the Country Tourer now has four-wheel drive in its armoury, as well as an extra 20mm ride height over the standard model. Plastic-trimmed, flared wheel arches and bumpers also aim to rid the Vauxhall of its boring reputation but in reality serve just as token off-roading gestures.

For the Country Tourer, at least, it’s diesel all the way. The more utilitarian (and undoubtedly the bigger seller) is the 163hp version – a frugal operator mated to a manual ‘box for those munching up the motorway miles.

Out test version had the bigger 195hp, twin-turbo lump. A two-litre with no shortage of power, it is surprisingly sluggish off the mark compared with some of its rivals. A look at the 0-62mph figure – 9.9 seconds – tells you everything you need to know and won’t do it any favours in a mercilessly competitive market.

The 70-litre fuel tank takes a fair bit of filling and with by-the-book consumption around the 43mpg mark, you’ll be doing it more frequently than the VW. Fuel use in the manual version is closer to 50mpg.

One of the reasons for the consumption is the lack of transmission choice on the bigger-engined cars – an auto ‘box is the only option. Four-wheel drive might also sap power, although for the most part torque is directed through the front wheels only. Selecting the sport mode sends 30% of torque to the back-end.

The Insignia is a vociferous worker, with engine and tyre noises both penetrating the cabin far too easily.

But slot some earplugs in and the car is a pretty smooth operator. It’s kitted with active dampers, which means the driver can select different modes but we found the ‘normal’ setting keeps things adequately tight around corners and there’s little reason to pick anything else.

The limited-slip diff adjusts torque between front and rear axles, transferring it to the wheels with most grip. Once you’re back on the straight and narrow the car reverts to front-wheel drive.

Cabin spec is pretty generous. Standard gear includes an 8in central screen, although its controls could do with fine-tuning. It’s primarily managed through a clumsy touchpad, but the more basic buttons on the steering wheel are easier to use.

Away from the driver’s seat the interior still has enough quality to rival its German foe. Passengers can fledge out adequately in the second row of seats, although it can feel like a dingy place to sit. Unfortunately tinted windows are also part the package and do nothing to brighten things up for back seat travellers.

Boot space is up to 540-litres – competitive with the rest of the pack – and the powered boot door can be set to open to different degrees by a dial on the driver’s door. It adds unnecessary complication, though the parking sensors are quite useful.

Pick up a base price version and you’ve got yourself a bargain, but top-spec models are difficult to justify. A retractable towing bar adds £545 to the bill and is worth having but it’s generally worth swerving the options list.