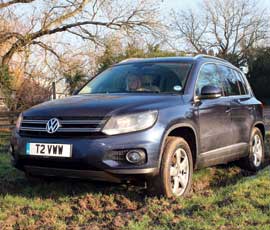 VW’s Tiguan has evolved as a do-anything mixture of the urban hatchback that is the Golf and its tough 4×4 cousin the Touareg.

It went under the knife after just two and a half years in a bid to keep up with the incredibly competitive 4×4 market which includes the Freelander and Audi Q3.There are six engines and four trims available, and we enjoyed the luxury of the range-topping Escape model, which carries a £25,865 price tag.

There’s no doubting that it looks distinctly Golf-like. For those that like their shiny metal there is a generous offering of chrome, and the horizontal lines across the front grille and bulging light clusters help bring it into line with the rest of the VW range.

VW hasn’t been shy in dressing it up either, with a touchscreen dash, auto-on lights and a mass of optional extras. It’s sophisticated without being complicated, although cream leather does have a habit of attracting dirt remarkably easily. 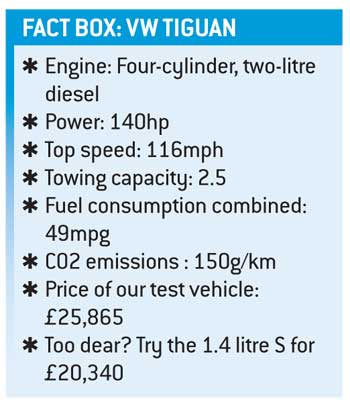 While it won’t subject you to stomach-churning G-forces, the two-litre TDI engine certainly has enough oomph to get you going. Peek under the bonnet and you’ll find a four-pot, 16-valve diesel, which VW says accounts for 90% of sales. It’s pretty torquey, too, and for a diesel the engine is surprisingly smooth.

In its six-speed manual guise it’s capable of an adequate but by no-means excessive 116mph. As the advert suggests, its handling is ‘just like a golf’. You certainly get the usual VW precision – the steering is accurate, the suspension firm and body roll is all but absent, making it at home on all but the most pot-holey of country roads.

They’ve also left space for the odd gadget and gizmo. There’s a stop/start function for fuel economy and auto hold which, although a little disconcerting at first, is handy in slow moving traffic. Top-spec models get a fatigue detection system in case you drift off to the pleasant murmur of the diesel.

Taking it seriously off road is a bit like dragging a young child round a museum – probably not worth the hassle. While the four-wheel drive is competent on less heavy going land, picking a route across a wet field could leave you in a spot of bother.

It may not have the panache of an Audi, nor the heritage of a Freelander, but it’s a credible competitor. In fact, it’s very good.

Watch the manufacturer’s video of the VW Tiguan off-road demo.