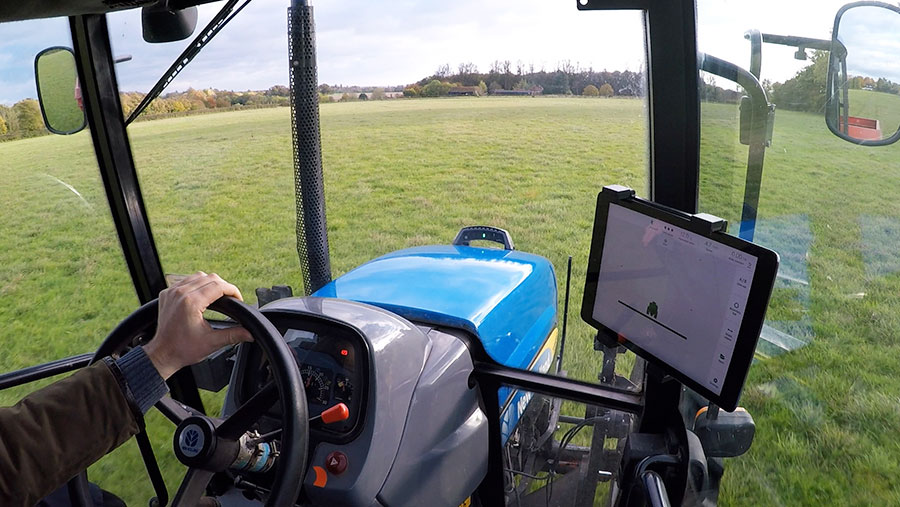 More and more industries are making use of the cheap-but-reliable technology offered by tablet computers and smartphones.

Unlike complicated, bespoke electronic controllers, these techy little devices can run multiple programmes that can be downloaded and updated in a matter of minutes.

It is little wonder then there are now several credible farm-specific guidance systems making use of this technology.

However, unlike car navigation systems that will work with a smart device’s basic GPS unit, these agricultural systems need a helping hand to get the degree of accuracy required.

This comes in the form of an external GPS receiver – mated to the tablet via Bluetooth or wi-fi – that uses a correction signal to boost accuracy to the levels required.

We take a look at some of the systems now on offer. 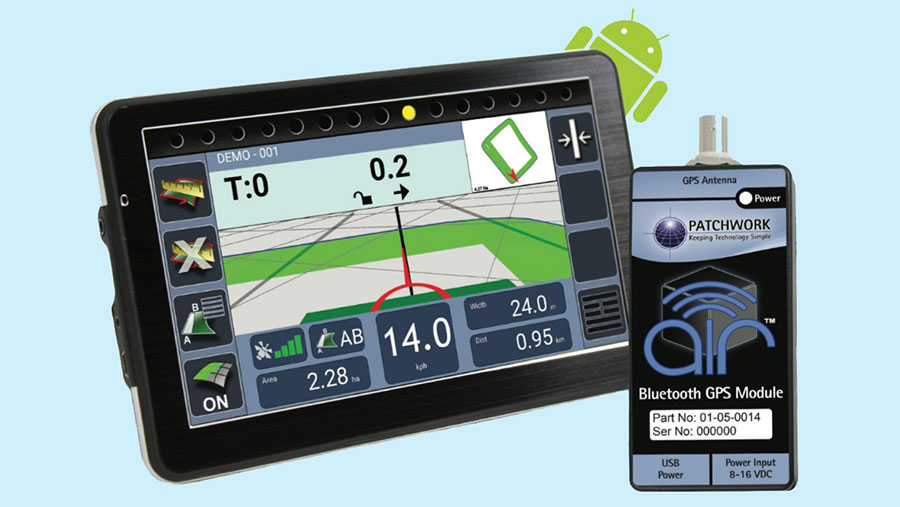 Patchwork is well known for its farmer-friendly lightbar guidance systems that typically cost less than US$2,665 (£2,032.60).

But now the Welsh firm offers a tablet-based version that comes in at less than half that price.

Called Blackbox Air, it’s based on an Android app that can be downloaded from the Google Play store. This looks similar to the maker’s higher-end systems, with a digital lightbar displayed at the top of the screen.

The GPS signal itself comes from a separate 10Hz Bluetooth receiver, which is included in the kit. This gives an accuracy of 20-30cm (8-12in).

To set the system up, the operator mounts the tablet in the cab and plugs the small GPS unit into a 12V socket. The two will then communicate wirelessly so the tablet can make use of the GPS unit’s signal.

A number of (paid for) extras such as vehicle tracking, automatic area recording and the ability to record jobs and send them to the office wirelessly are also available.

For those without an Android tablet, Patchwork will provide one at extra cost with the software ready installed. 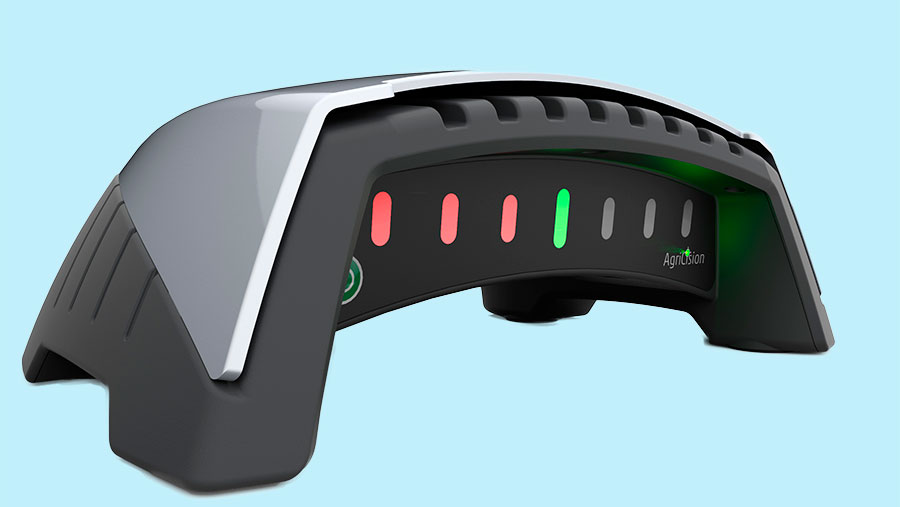 Recent start-up Agricision takes a slightly different approach to the other systems in this group, offering a separate lightbar unit that mounts on the tractor’s bonnet.

The theory is that putting this outside the cab in the centre of the bonnet helps the operator drive more accurately. This is because they don’t have to constantly adjust their focus from the field to a screen.

The waterproof unit is magnetic and for those with plastic or composite bonnets magnetic stickers are available.

The lightbar is also home to the 10Hz GPS receiver, which works with several satellites and correction signals to give an accuracy of 20-30cm (8-12in).

This is rechargeable, has a 24-hour battery life and does not require a phone signal to work.

The system communicates via Bluetooth with either an Apple iPhone or iPad mounted in the cab so the driver can keep tabs on bouts and see the area worked.

The app will also record A-B lines and boundaries, calculate field sizes, record the area worked and allow you to adjust implement width. This is free to download from the Apple app store. 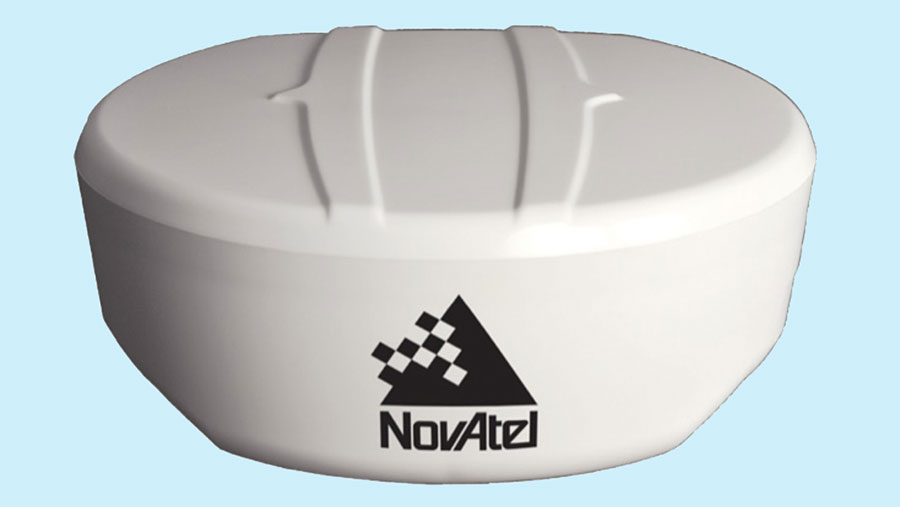 This gets its GPS fix from a 10Hz Novatel Ag-Star dome receiver mounted on the vehicle’s roof. It communicates with the tablet via Bluetooth. As with most of the systems here, this offers 20-30cm (8-12in) accuracy.

Sixty-5 Technologies says the system has been specifically designed for grassland farmers who want to use GPS for jobs such as fertiliser spreading, spraying, and reseeding.

That means it keeps the operation fairly simple offering predicted guidelines for the operator to follow, rather than a lightbar.

There are also bout markers and a coverage map so it’s clear which areas of the field have been worked. This system also displays forward speed and the area worked.

To set it up, the operator just plugs in the components, inputs the implement’s width and presses a start button.

Once the field operation has been completed the finished map can be sent to secure webpage where the information can be downloaded to the office computer.

The Grass-Guide system is offered as a complete system only, including the tablet, a case, mounting bracket and GPS receiver. There are no subscription fees to pay. 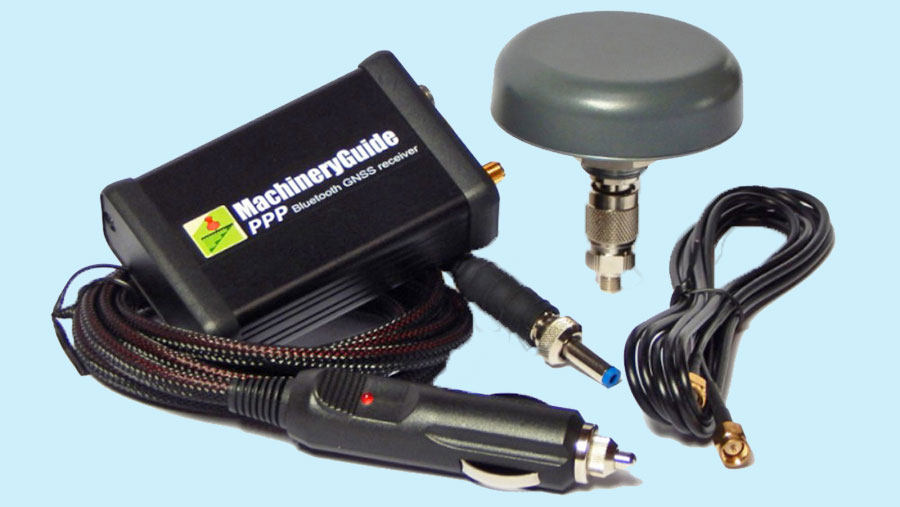 Machinery Guide is another firm that’s gone down the Android app route, but it offers a few more configuration options than some.

That means buyers can pay for the software only and purchase their own GPS receiver – such as Emlid’s Reach RS real-time kinematic (RTK) base station – or go for one of the Hungarian firm’s own receiver offerings.

The first of these is the entry-level 10Hz unit that offers 20 to 30cm (8-12in) accuracy via the standard GPS service with a correction signal. There’s also a more accurate option, which uses a dual-band antenna on the roof and precise point positioning (PPP) correction to improve accuracy to 10 to 20cm (4-8in).

Both units communicate with the Android device via Bluetooth and come with an antenna that needs to be mounted on the vehicle’s roof. They’re also powered from a dual USB power socket in the cab.

The software itself offers the ability to set up A-B lines, record individual jobs and it has a digital lightbar, as well as bout markers. A licence to download and use the software only costs $177 (£135) plus VAT. 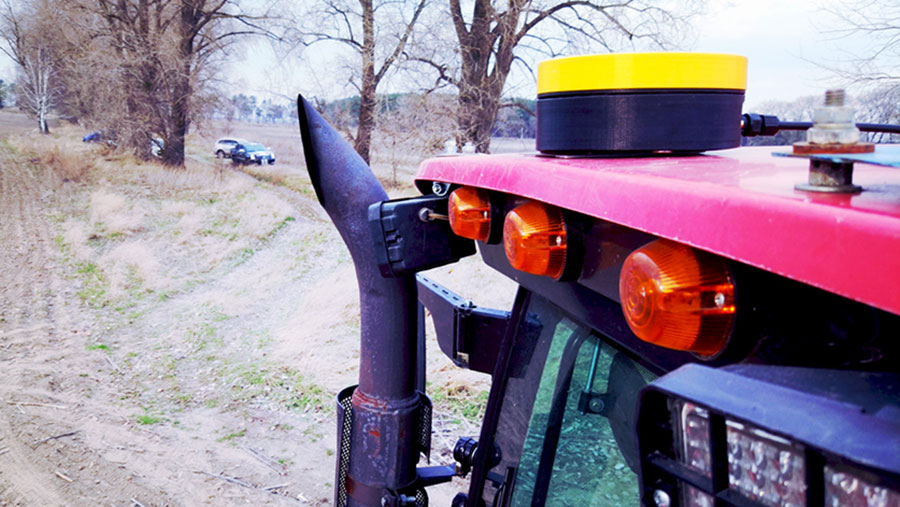 The eFarmer app was developed in the Netherlands by a team of Ukrainian IT specialists and offers entry-level and RTK guidance through an Android device.

The software can be downloaded to most Android tablets or phones, but unlike most others that are free or have a one-off fee, eFarmer has a $119/year subscription. It offers the ability to put in straight or curved A-B lines, map fields and record the area worked.

Buyers will also need the firm’s Fieldbee roof-mounted GPS sensor that offers guidance accuracy of 20-50cm (8-20in). This works off the standard combination of GPS with a correction signal.

The Fieldbee receiver is also battery-powered, meaning no cables are required, and it is capable of hooking up to a local RTK network.

The eFarmer system also offers its own portable RTK base station that works in tandem with the Fieldbee receiver. It provides a correction of the GPS signal, increasing the accuracy of the system to 0 to 4cm (0-1.5in). Depending on the farm’s terrain, the base station can be mounted on a building or a tripod in the field.

The range is 2km (1.2 miles) via a radio signal or more than 10km (6 miles) with a mobile internet connection.

It’s also possible to use the system in conjunction with an auto-steer kit. 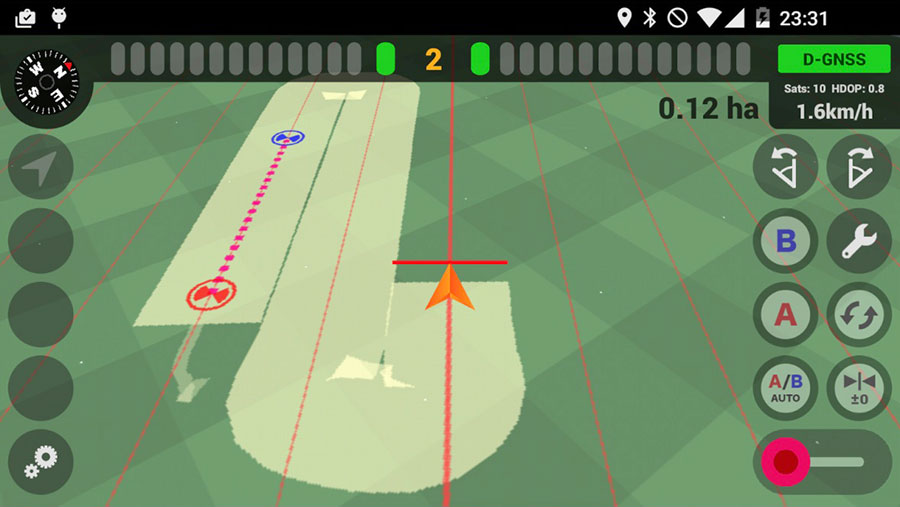 Agribus-Navi offers one of the cheapest forms of guidance with its free Android app for tablets and smartphones.

This is ad-supported though, so if you want to stop adverts flicking up on the screen you’ll need to buy a $60/year (£45.76/year) subscription. This is available through the Google Play store.

The app offers a basic guidance system to assist with straight driving, but it doesn’t work with auto-steer systems. Later versions of the app are promised to have more functions such as task management built in.

Although the app will work on its own, its accuracy is severely hampered by the quality of the phone or tablet’s GPS. Therefore it will need to be used in conjunction with a Bluetooth or USB GPS/GNSS receiver. Recommended units include the Hemisphere A325 and Dual XGPS160.

However, it should work with several other units, including Emlid’s Reach RS RTK base station featured below.

This effectively gives you a cheaper DIY alternative to some of the other manufacturers’ offerings.

There’s also another competitor free app called Field Navigator that can also be paired with a GPS receiver to give a cheap-and-cheerful guidance service. 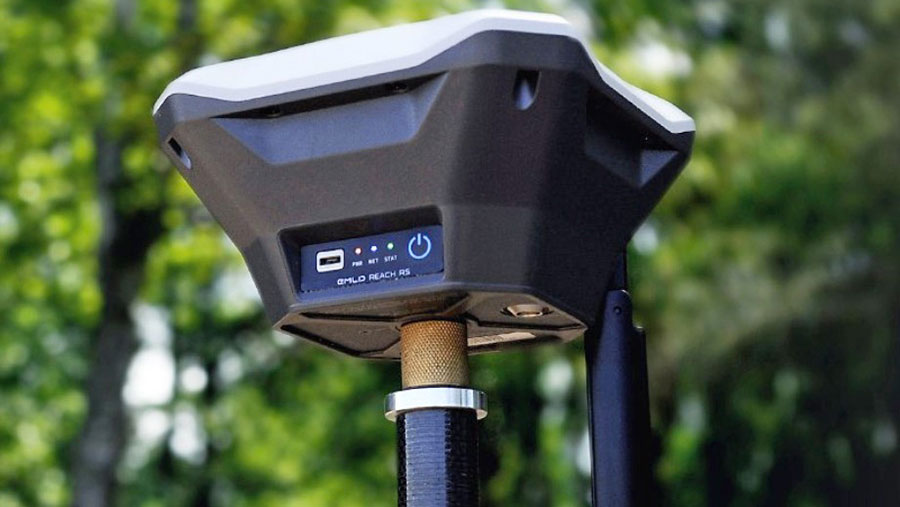 Emlid doesn’t offer a full GPS system, but it does offer a portable RTK base station that can be used with some of the other systems featured.

The $799 (£609.40) Reach RS system is capable of connecting to a tablet or phone by Bluetooth or wifi and it will also work with various auto-steer systems. On top of that, it doubles up as a surveying and mapping tool.

According to the Emlid, the system will work with the eFarmer, Machinery Guide and Agribus-Navi apps already featured.