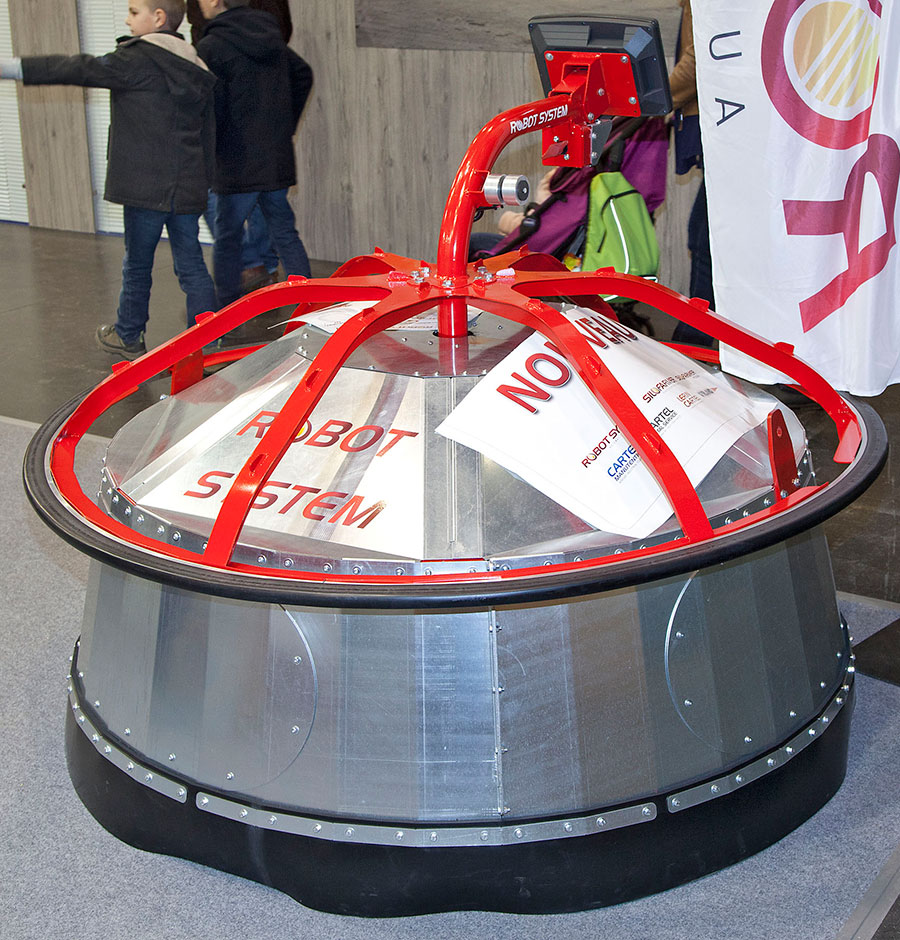 Automated feed pushers are now an established part of many dairy systems and farmers who have gone down the robotic route will have been interested spectators as Robot Systems pulled the wraps off its prototype Jumbobull 160.

The spaceship-shaped machine is 1.67m in diameter and will provide competition to the likes of Lely’s well-established Juno.

It is designed to scurry around shoving grub closer to the feed barrier, which the company claims will reduce labour pressures, increase cow dry matter intakes and cut silage waste.

In doing so, it should also give the lower-ranking cows regular access to good-quality feed rather than being forced to make do with leftovers.

Once the routes and distances have been programmed in the screen, the Dalek whizzes off to work before returning to base to recharge its four 12V batteries.

It rotates as it moves at a steady 2kph pace and lifts its skirt at the end of each run to avoid dragging silage across the yard.

Sensors should save it from any serious prangs with shed stanchions, too. 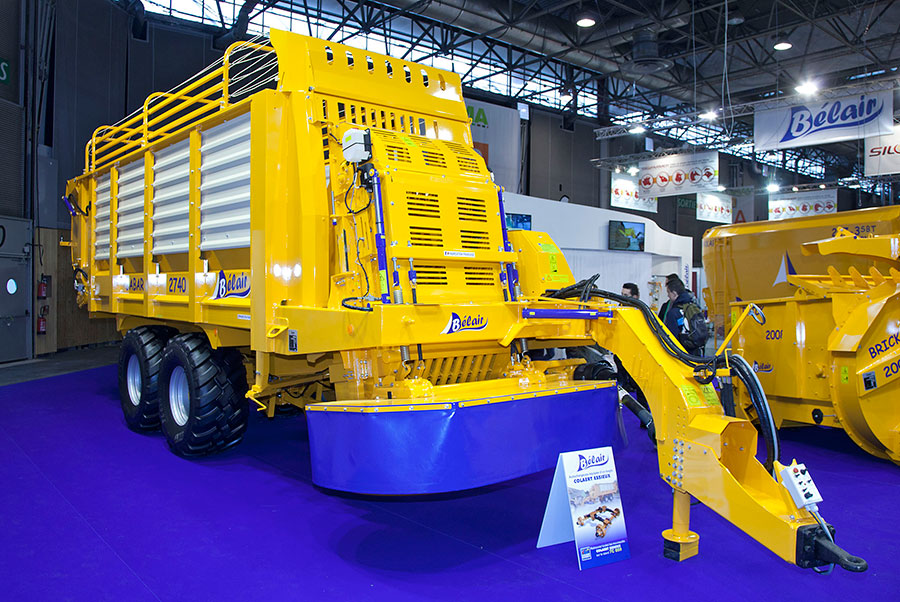 French firm Belair, which already has some kit working in the UK through a tie-up with JF-Stoll, caught the eye of several Irish visitors interested in its four-model zero-grazer range.

Fresh grass systems are continuing to grow in popularity across Europe as farmers look to get more from their land while maintaining decent milk yields. 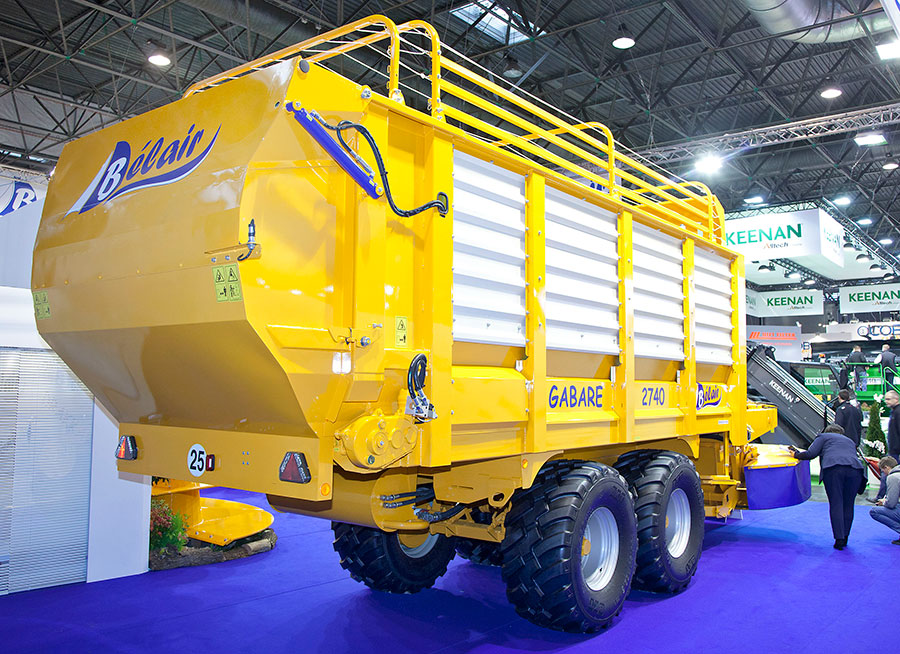 The grazer uses a Gallignani-sourced two-drum mower with a 2.25m working width, which shifts the crop through a chopper and into the 40cu m trailer section.

There are various unloading options, including a hydraulic rear door or fixed-tail options that can distribute grass left or right through a feed passage. 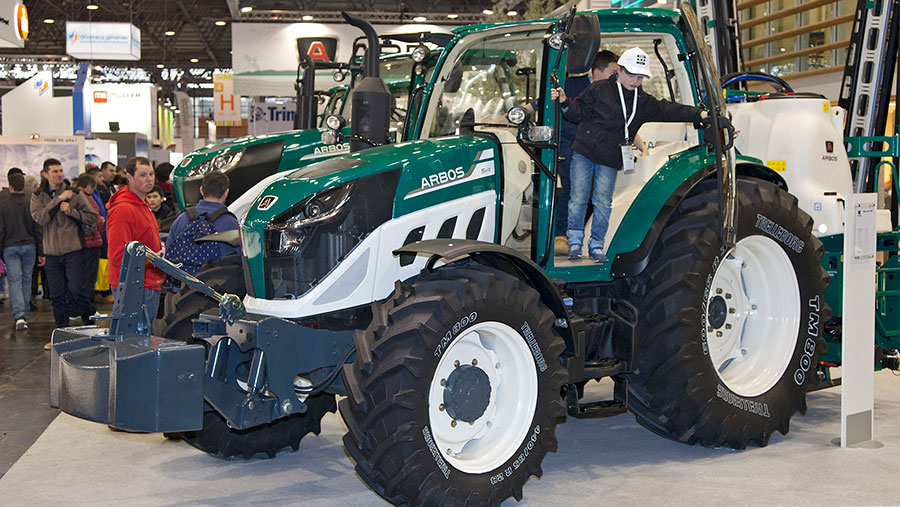 Since making a splash at Agritechnica 18 months ago, the Arbos tractor brand has been on a mission to make headway in Europe.

The green-and-cream tractors are the result of a tie-up which involves China’s biggest tractor brand – Foton – and Italian precision drill make Matermacc.

After jumping through the necessary hoops for European-type approval, the first range of tractors is now available in some parts of the continent and is set to debut in the UK at next year’s Lamma show.

The three-model 5 Series extends from 102-136hp and all of them are propelled by four-pot Kohler engines using a diesel oxidation catalyst and selective catalytic reduction system buried in the exhaust to clean up smuts.

Arbos fits its own three-range, five-gear semi-powershift cog box that tops out at 40kph.

Basic models get a mechanical shuttle and two-stage high/low powershift, while the pricier option adds an electrohydraulic shuttle and three clutchless steps.

Meanwhile, the company says its bigger prototype tractors – the 140-200hp 6 Series and 220-260hp 7 Series – will go into production by the middle of next year.

Kohler doesn’t build a suitable six-cylinder block so Deutz looks likely to be the engine provider and the transmission will be a bigger version of the 5 Series’ semi-powershift, which means there will be no CVT option. 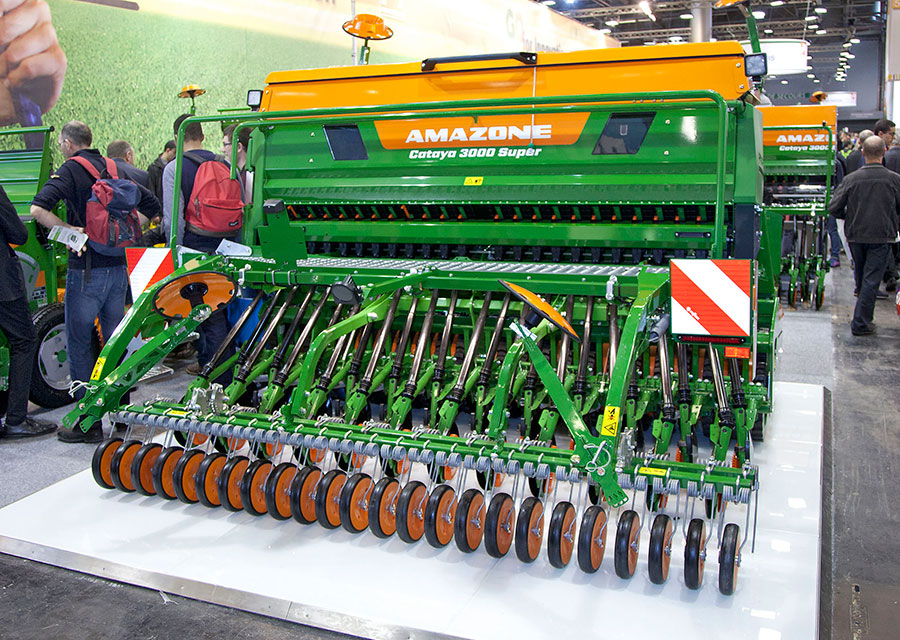 Amazone’s stand is always littered with mammoth drilling rigs capable of covering hundreds of hectares a day, but the company hasn’t abandoned those at the other end of the farming scale.

Box drills continue to reliably serve thousands of smaller farmers across Europe and the German kit builder has added to buyers’ options with its new Cataya model.

Paired with an updated Cultimix power harrow, the 3m machine comes with an 830-litre hopper that can be extended to take capacity up to 1,270-litres.

Trailing the soil-smashing element is the choice of four different rollers that consolidate the ground ahead of the drilling coulters.

A single-disc opener comes as standard and each coulter is fitted with its own plastic wheel to tweak the depth in three stages. That said, the company expects most machines to be sold with the double-disc opener that offers almost double the downward pressure – 60kg/coulter – to help slice through hard ground.

Machines can be ordered with either 12.5cm or 15cm row widths and behind the drilling unit, there’s a row of spring tines followed by small press wheels.

Natty features include a special tool that can be used to adjust the power harrow blade depth, position of the crumbler board ahead of the packer, angle of the marker arms and downward pressure of the coulters. 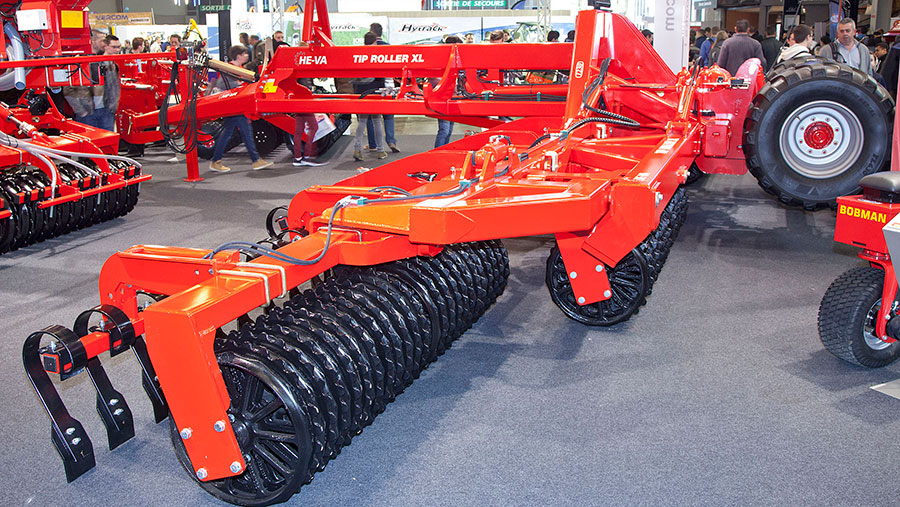 Rolls are playing an increasingly important part in many arable rotations and He-Va reckons its multi-tasking Tip-Roller XL can help by doing several jobs in one pass.

While its King Roller is a pretty simple consolidation tool, the Tip-Roller is designed to carry a toolbar with straw harrow tines, levelling boards or more aggressive knife tine boards ahead of the Cambridge rolls.

The maker’s previous rolls-and-shatterboard combination only extended to 10m, but to go any wider the brainy designers had to find a way of folding the five-section arrangement into a suitable width for road transport.

Running a straw harrow alone only ever does half a job, says the company because the chitted soil is never consolidated, so combining it with the rolls should offer a better chance of getting weed seeds to germinate.

A series of accumulators helps to transfer the main frame’s considerable bulk to the outermost gangs, though the pure weight of the rig all but rules out work overploughed ground because the size of tractor required on the front would likely cause more harm than good.

The rolls are set to debut in the UK on the Opico stand at Cereals. 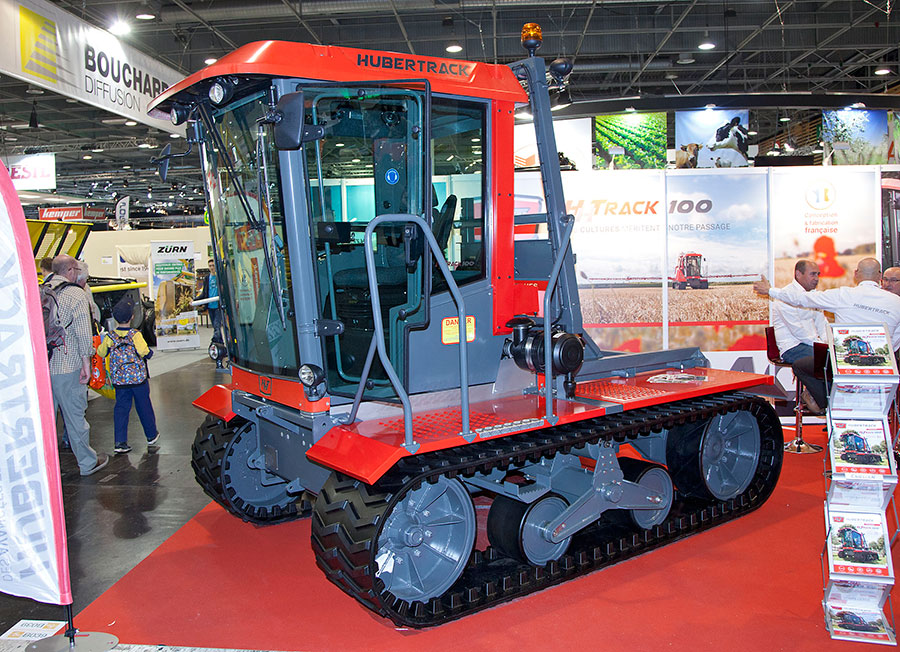 Rubber-tracked crawlers have been making themselves at home in the UK on big maize clamps over the past couple of years, but French maker Hubertrack is taking things a step further by selling its machine as a bona fide field tractor.

The HH Track 100 can be ordered with a tool carrier to fit on its rear deck ready to attach a mounted sprayer or fertiliser spinner.

The big advantage, says the company, is the super-lightweight footprint thanks to the 2.45m long, 55cm wide friction-driven tracks and modest 4t weight.

At the business end, is a four bore, 3.6-litre Deutz block, which throws 100hp through the Poclain hydrostatic transmission.

On top sits a centrally mounted cab fitted with most of the mod-cons including a terminal, forward/reverse joystick and air-cushioned seat.

However, buyers will have to raid the options list for air-conditioning, along with a pto and the tool-carrying kit for the back.

The machines are made near Bordeaux on the west coast of France and cost €75,000 (£63,949). That figure might look a good bit cheaper than the Pistenbully and alike, but it’s worth bearing in mind that the Hubertrack is a much lighterweight machine. 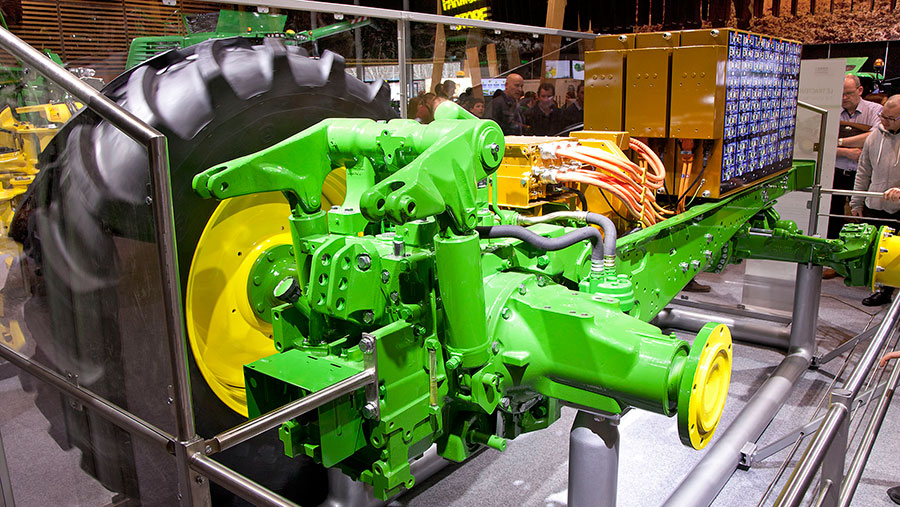 Several of the big tractor manufacturers were offering glimpses into the future with off-the-wall inventions still a long way from full-scale production.

While Case and New Holland went big on driverless machines, John Deere was showing off its progress towards building a fully battery-powered electric tractor.

Keener readers might remember Deere toying with tractor electrics at previous machinery exhibitions, including the 6210RE model, which used a crankshaft-driven generator to provide a constant 27hp supply to power implements on the back.

That project has since been put on the back-burner, with the new battery-powered tractor stealing most of the attention on Deere’s Sima stand.

The machine comes with plenty of perks – high torque at low speed, minimal noise and zero emissions – but storing enough juice in the batteries for power-hungry jobs has been a perpetual problem for designers of all types of self-propelled vehicles.

According to Deere, the Sesam tractor can run for up to four hours on one battery charge – the equivalent of 34 miles of transport work. Charging time is about three hours and tests suggest the battery will last for well over 3,000 charging cycles.

The bank of batteries is stashed within the frame of a standard 6R tractor, but instead of a regular engine, there are two electric motors each providing 130kW (175hp).

One motor powers the pto and hydraulic systems and the other is directed through an adapted Direct Drive gearbox, but it’s possible to combine the two for full motive power during haulage work. 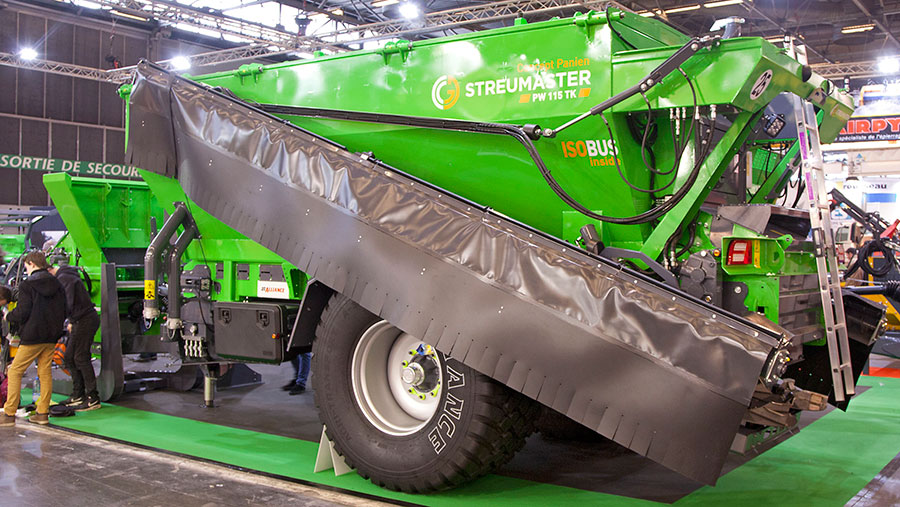 French manufacturer Streumaster’s trailed spreader could be a useful tool in the armoury of contractors spreading vast quantities of mineral fertiliser and lime.

Buyers looking for maximum versatility can order their machine with auger-fed booms and plastic guards, which should keep them working when it’s too windy for regular disc-type equivalents.

The monster pto-driven spreader needs upwards of 150hp on the drawbar and will carry 26cu m of material in triple-axle guise or 15cu m as a twin-axle machine.

The company also offers mounting kits for fitting to the back of a Claas Xerion, Terragator or Vervaet tractor unit.

Spreading widths extend from 12m to 18m, with the wings carrying holes drilled at 15cm intervals to distribute the material from the hydraulically powered auger.

Fertiliser can be bulk loaded either using a telehandler or via pipes on the side of the hopper that hoover it up from the heap.