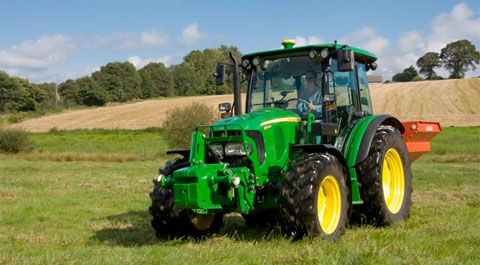 Tractor guidance systems are not just the domain of large arable farms – there are also systems designed to meet the requirements of smaller livestock and mixed farms, but at a lower cost. Andy Collings reports.

Think tractor guidance and, for most, there will visions of large tractors pulling wide cultivators in arrow-straight lines across prairie-size fields.

While this is clearly the popular image projected by manufacturers of such guidance equipment, the situation is changing rapidly as an increasing number of smaller scale growers and livestock farms look to adopt such systems.

Prompting the move is the realisation that better use of expensive fertiliser and pesticides comes from accurate driving; there are manufacturers of guidance systems which believe costs can be reduced by as much 8% even with the most basic systems, while the more advanced and expensive autosteer could save up to 10%.

Having said that, justifying the high cost of autosteer, RTK and all the other peripheral costs of full automated tractor guidance can still be difficult on smaller farms.

The solution is to opt for the light bar control system which, while not offering the degree of sophistication of the more expensive systems is, none-the-less a way of ensuring the tractor remains in the right place – or there about – and all at an affordable outlay.

In the main, they are relatively easy to install and operate, and their performance, while not matching those of their vastly more expensive counterparts with their +/- 2cm accuracies, are normally more than adequate to provide sufficient guidance for most farm operations.

Here we look at a few of the systems available to those wanting guidance on a budget.

For just over £800 John Deere offers its GreenStar Lightbar and StarFire 300 receiver package which has been designed for small to medium-sized livestock farms and medium-sized arable units.

A manual steering aid which the company insists is easy to install and use, it is a simple parallel tracking system which helps to achieve higher levels of accuracy when working with say, wide cultivators or drills.

The system comes in to its own by being particularly useful when applying fertiliser or chemicals to grassland which is usually void of tramlines. It could also be the case that operations need to be progressed after dark or in heavy fog conditions.

Requiring a 12V power supply, the system uses the StarFire 300 Egnos-only receiver which is mounted in the vehicle cab and is able to provide an accuracy level of +/- 40cm.

For the operator then, the lightbar display in the cab employs a series of LED indicators each having a resolution of 10cm. By keeping the light in the green sector, these help the driver to steer straight and parallel with the previous bout. 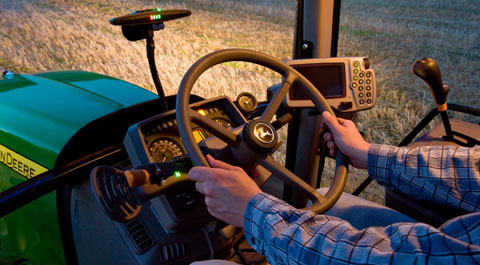 Described by Trimble as being an entry-level guidance display system is the company’s EZ-Guide 250. A robustly built unit having a 11cm wide colour screen, which provides a display the route of a tractor and implement as it moves across the field, this unit has a built-in GPS receiver.

Trimble also offers the CFX-750 which is a larger and more advanced unit than the EZ-Guide 250. A 20cm colour display which uses touch screen commands sits below a 27 LED light bar. 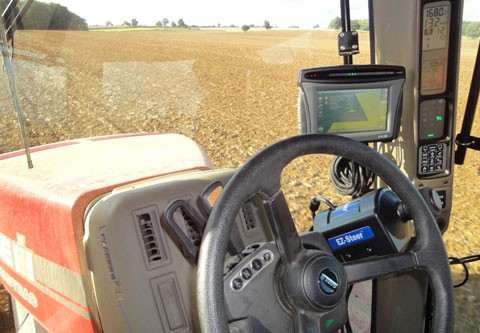 From Patchwork is the recently launched BlackBox Go GPS system, which the company describes as being the easiest ever guidance system to install and use.

A development of the BlackBox 510, which has a 21cm touch screen and uses 10 Hz DGPS with Egnos/WAAS for correction, the Go GPS has an on-screen start up wizard to assist with its set up.

Like the 510, the new version can be updated with more advanced programmes that allow it to be linked to management software, apply variable rates, section control and spreader auto-shut-off.

The Patchwork system GO GPS is priced around £1,475. 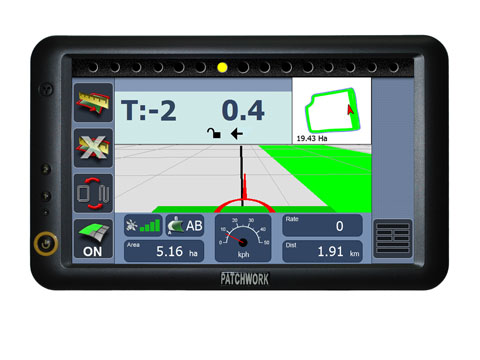 Claas offers the entry-level light bar system in its GPS Pilot TS, which can be upgraded with many of the more advanced features offered by the automated steering system GPS Pilot.

In addition the TS is compatible with the Claas Agro-Map mapping software, which will allow the saving of information such as the A-B lines, drill or tramline settings.

Understandably then, lightbar systems tend to dominate the less expensive end of the market and, with more than a few electronic companies looking for a slice of the market, the choice is vast. 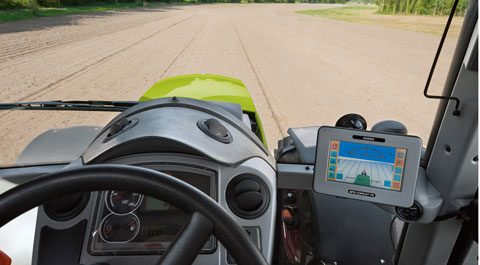 For most tractor drivers it can be tiring having to concentrate for hours on a band of lights although some report it can become an almost subconscious reaction to move the steering wheel in one direction or another to keep the green lights on.

The alternative is to opt for one of the automatic steering steering systems now offered by several manufacturers.

Trimble’s EZ-Steer assisted steering system uses an electric motor with a foam wheel to turn the tractor’s steering wheel in response to commands from the firm’s EZ-Guide and CFX-750 units.

A simple friction drive, Trimble says the system can be fitted to most tractors equipped with power steering in less than half an hour – a bracket is attached to the steering column to which the motor is bolted. To help ensure fingers do not become trapped between the friction drive and the steering wheel, the motor is spring-loaded to allow it to swing out.

An interesting development is use of a system which helps to maintain a tractor on track when working across slopes or on difficult terrain.

Bearing in mind that the guidance system is set on keeping the receiving aerial in the right position, its movement as the tractor moves across undulating ground can mislead the system and encourage it to take a path which keeps the aerial on course but not the tractor and the implement it may be pulling.

Enter then a unit containing twin gyroscopes and twin accelerometers, which are able to monitor movement as the tractor makes its way over the ground and allow the guidance system to make adjustments and keep the tractor on the required track.

Recognising perhaps, that having an electric motor strapped to a bracket does lack a certain style, particularly when the tractor manufacturer has made efforts to create a smooth working environment, there is now the EZ-Pilot with its hub-mounted motor. A less intrusive system and one which does not trap fingers, the EZ-Pilot receives its instructions from the CFX-750 display. 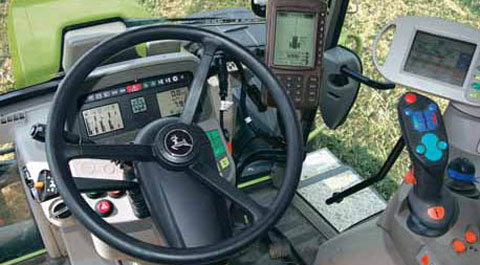 John Deere’s AutoTrac Universal 200 steering kit can also be fitted to most makes of tractor and Deere says it can be installed in under an hour. It works with all of the firm’s guidance systems, including the budget Starfire 300 system.