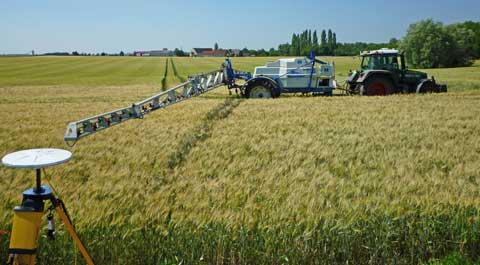 For the final part of our series, in which we take an in-depth look at the world of GPS-activated tractor guidance systems, it’s the turn of the highly accurate RTK systems – Real Time Kinematic – which can make sure a tractor and its implement is working within +/-2cm of its required position.

The introduction of RTK has opened the door for a whole new tier of precision farming techniques and systems in terms of planting, controlled traffic, pesticide application and so on – techniques that only a few years ago would have been considered almost impossible.

But before discovering how RTK works, the equipment required and how much they cost to operate, a brief recap on the ground we have covered so far.

In part one we looked at basic tractor guidance systems – the budget systems, as we called them. Designed for entry-level users who require a low-cost system to allow, say, more accurate fertiliser applications in grass fields or for smaller-scale arable farmers who may struggle to justify investing in more sophisticated systems, these systems tend to major on light bars to indicate to operators the correct route to drive.

Tractor guidance can, of course, be manually controlled using visual indicators or automatically through either a tractor’s integral control system or by using a retro-fitted steering wheel motor.

Part two of our series took us into the realms of the subscription-based OmniStar Hp and StarFire 2 systems, which are designed to provide a +/-10cm pass-to-pass accuracy. These systems acquire this degree of accuracy through use of a dual-frequency GPS receiver, which allows the system to draw on data provided by a larger number of satellites positioned around the globe.

A tractor receives a signal from a satellite and, at the same time, a geostationary satellite transmits a differential course correction signal to the tractor.

All of which brings us nicely and sequentially to the subject of the high-precision RTK guidance – a system which also relies on a correction signal, but employs a land-based reference to provide it, rather than a second satellite. The first question, of course, is why does farming need a system which can provide an accuracy that places a tractor or implement with an accuracy of +/-2cm?

For many jobs, such as cultivating, this degree of accuracy is clearly not required, but when it comes to precision drilling, strips sowing, the planting and harvesting of vegetables or band spraying, for example, there is an acute need for accuracy, not only on a specific day, but one which is also repeatable in successive operations.

Those who are using or looking to adopt controlled-traffic farming – where tractors and other vehicular traffic always run on designated wheelings to avoid soil compaction – will also need RTK rather than standard GPS auto-steer equipment using a global correction system. RTK lets tractors stay on the same path at each visit to the field, while other systems can drift offline by up to 1.5m.

So just what is RTK and why are there now big efforts to make such systems available in ever larger areas of the country?

For starters then, RTK stands for Real Time Kinematic and uses the signals produced by the United States’ GPS (Global Positioning System) and for some systems also the Russian GLONASS (Global Navigation Satellite System). These signals are complemented by a single ground-based reference station that provides real-time corrections.

Without labouring the detail, accuracy is all about time differentials and the ability of a system to accurately measure and interpret the differences in time as distances. In what might be described as “normal” satellite navigation, receivers compare a signal being sent from a satellite with an internally-generated copy of the same signal.

Due to the distance the satellite-generated signal has to travel, there is a time delay between the two signals and it is the processing of this time data – the phase – which results in the distance from the satellite being known. Repeat this operation with several other satellites and – through triangulation – the global position of the receiver and the tractor to which it is attached can be determined.

The degree of accuracy is generally down to the ability of the receiver’s electronics to compare the two signals and, left to their own devices, accuracy would probably not be sufficient to be of much use in most agricultural operations.

In short, help is required and as we have noted, this means having a differential signal that can overcome the errors which inevitability arise when signals are sent over long distances.

For RTK then, a base station is employed, which re-broadcasts the phase of the signal it measured to the tractor’s receiver, where it compares its own phase measurements with those received from the base station.

The result, in theory at least, is for an accuracy of just a few millimetres, but the reality is that accuracy can only be to the same accuracy as the position of the base station – which is generally considered to be in the +/- 2cm zone.

No reason for any criticism though – far from it – for a tractor running on wide, low-ground pressure tyres pulling a 6m drill, the odd couple of centimetres either way is not going to be that significant.

There are limitations though and, while the expansion of RTK availability continues in the arable areas which dominate the east of the UK, it is fair to say that the relatively flat topography of this area lends itself well to such development.

According to Trimble, which supplies the Center Point RTK system, farms wishing to use RTK ideally need to be within about eight miles of a base station and there should not be obstructions such as hills, large buildings or trees to prevent the required “line-of-sight” between base station and tractors.

For most growers, the cost of installing a base station is generally assumed to be prohibitive, so it is no surprise there are companies who have set up base stations which can be used by farmers, albeit at a cost.

RTK Farming, for example, was founded by a group of farmers based in south Cambridgeshire, with the aim of providing an affordable RTK network for subscribing farmers in the area. Costs include a £200 membership fee and annual payments of £500 for each guidance unit, with reductions for those using six or more units.

The area covered by the company now extends from Chelmsford in the south to Kings Lynn and there are plans to increase this coverage.

Claas has also recently announced its intention to expand its RTK coverage in the east of England through use of television and wireless masts, along with an increase in signal strength. The aim, says Claas, is to cover 60% of England’s arable area in the East – from Yorkshire to Swindon – at a cost of £450/year/unit.

Individual agricultural dealers may offer RTK network systems for farmers in a given area. The indications are that their charges are broadly in line with the above.

For John Deere users, the company can provide a mobile base station for use with its StarFire 3000 receiver, either for in-field use or fitted to a fence post, building or tower. The system can also be dealer-run to provide an RTK service to farmers operating within the available range and, through use of repeaters employing different radio frequencies to avoid signal corruption, the area covered can be increased significantly.

But what are the options for farmers operating in areas of the country where an RTK base station would have severe limitations – in hilly terrain, for example? The solution is to use a mobile phone to receive the correction information which is sent from a network of GPS reference stations situated in the coverage area. At a cost of about £1,200/year, the Trimble VRS or the John Deere Mobile RTK system is more expensive than conventional base station/receiver systems, but the advantage is that the distance between tractor and reference stations does not affect accuracy.

As farming practices become ever more demanding in their need for precision, RTK is likely to be increasingly adopted by farmers – an expansion which will go hand in hand with the availability of correction signals provided by a network of base stations.

The table below shows the potential savings of GPS systems when using a 6m drill on a 24m tramline system.

Ensuring a tractor is running where it should be does not necessarily mean the implement being towing behind is also where it should be. In siding ground, it is quite normal for trailed implements to take the “lower” route and, as a result, accuracy can be jeopardised.

The solution is to place a receiver on the implement, which then relays information to the towing tractor regarding the steering correction required to keep the implement on track.

It is worth noting at this point that it is the receiver of a navigation system that is maintained in a required position by the guidance system – not necessarily the tractor or, for that matter, the implement. It can be that a tractor with a receiver on the cab roof working across sloping ground can be as much as 50cm off the required line – but the receiver will be spot on and be totally oblivious to any inaccuracies.

The potential for these errors is not lost on manufacturers, several of which have produced RTK guidance systems to overcome them. John Deere, for example, offers iGuide, which requires an implement to be fitted with a StarFire 3000 receiver which then transmits its position to the towing tractor’s steering system.

Trimble offers a slightly more refined version, which maintains the tractor on its designated path, but then moves the implement to compensate for slopes and the resulting drift off line. This system, of course, requires the implement to be capable of steering, either by side shifting or having wheels that can be angled.