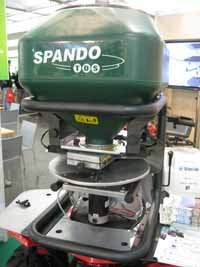 De Sangosse has developed a slug pellet applicator which produces an even spread pattern up to 24m and reduces the risk of pellets reaching watercourses.

The Spando TDS has two spreading discs. The top rotor spreads the product during normal field operations and has been tuned to give an even spread pattern on both sides of the machine, up to 24m.

The second, smaller disc sits below the main rotor and pellets are re-directed to this when the headland mode is selected.

Rates are automatically adjusted according to forward speed, which is measured using a built-in GPS receiver, or a speedometer wired into the ATV.

The Spando TDS will be available in France this autumn and De Sangosse says it will retail for more than €2500.