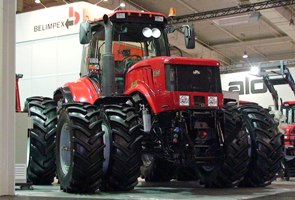 Tractors that generate power for more than just their own needs were a definite trend at this year’s show, with Claas and  Minsk Tractor Works (MTW) joining John Deere in getting into the generation game.

The Belarus 3023 is a joint production between Belarussian tractor maker MTW and Russian electronics and high-wattage electricity specialist Ruselprom. The result is a 300hp tractor that produces an astonishing 175kW of DC power.

At the moment this power is channelled to a chunky motor that powers the all-electric front pto, as well as to the smaller motor on the cooling fan. The benefit, says MTW, is mainly lower driveline losses – the electric fan, for instance, loses 10kW, while its engine-driven equivalent would part company with 20kW along the way.
It’s also about rpm flexibility. The fan can now be driven at any rpm, rather than being stuck at what the engine wants to spin it at. It can also be reversed at the press of a button to blow out the radiator. 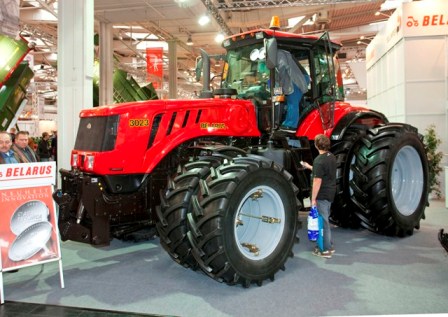 And if you want a supply of beefy electrical power to run grainstore, milking parlour or mill and mix equipment, you can just attach the large plug to the side of the tractor. Equally, you can use the electric current to operate things like sprayer pumps and drill fans that are normally run from the pto or hydraulically.
Five tractors are out on test this year, says MTW, and another 20 will be on sale in 2010, though only to customers in Russia.