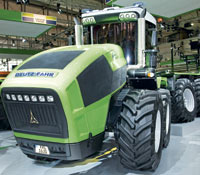 It was a show for big, gutsy tractors (mainly from the former Eastern bloc) but there were plenty of smaller and mid-sized offerings there, too.

Here is a glimpse at five of them, for more information, click on ‘read more’.

Claas has sold nearly 1000 Xerions across Europe since the model’s launch four years ago, and two new models, the 4500 and 5000, now take the company’s offering to and beyond the 500hp bracket. Both models have CVT transmissions and are equipped with 24-volt electrical systems. They’re due in the UK next year for testing, and will be available shortly after that, says Claas.

It’s not often that Belarus tractors make headline news, but the company wowed show goers with its 300hp 3023, capable of producing a colossal 170kW of electrical power. This is more than enough to power Amazone’s concept eSpray trailed sprayer, which only needs 17kW. The company reckon 20 units could be on sale as soon as next year.

Prototype it may be, but this gargantuan eight-wheeled Deutz could well go into production, reckons the company. Under the bonnet, there’s a 600hp V8 Deutz engine, and two pairs of tandem axles plus an articulated steer system mean max traction at all times.

It’s been nearly 30 years since Zetor’s had a home-grown, six-cylinder range, but that could all be about to change. This prototype Maxterra is set to be part of a four-model range spanning the 130-170hp bracket and all will boast 24 x 24 four-step powershift transmissions. They’ll be on sale in two years, says the Czech company.