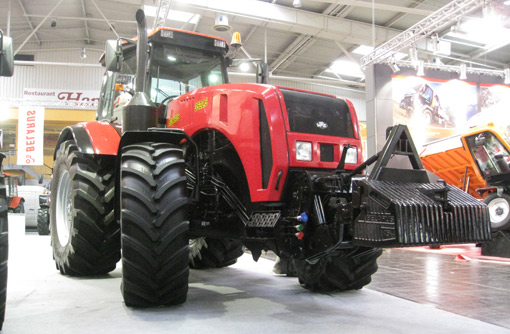 Ex-Soviet tractor maker Belarus was showing off a 350hp prototype at Agritechnica. Fitted out with a 7.8-litre Deutz engine, it drives through a four range, six step powershift gearbox designed and built at the company’s Minsk HQ. Build looks pretty basic but the spec’s not with Bosch hydraulics and reverse-drive making for a fairly well kitted out machine. The tractor has AdBlue exhaust treatment to keep within the latest emissions regulations as do smaller 200-250hp machines equipped with the company’s own 7.1-litre six-pot power-plants. In fact, in striving to build as many of its own components as possible, the Belarus tractor plant employs approximately 50,000 people and turns out between 45,000 to 50,000 tractors a year, mostly destined for ex-Soviet states.