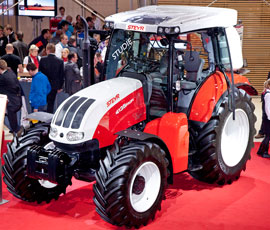 This follows on from the development of a 50:50 diesel and biogas tractor back in 2009.

The Profi 4135 Natural Power has a natural gas engine along with a total of nine biogas fuel tanks – three on the rear of the cab, two on either side of the engine and four under the bonnet. That’s enough to run the tractor for 5-7 hours, but there’s also a 15 litre petrol reserve tank.

The machine is still a concept and there are no plans yet for a release date. However, with nearly 7,000 biogas plants, 650,000ha of crops planted for biogas and 1,000 fuel stations offering CNG/LPG in Germany, this is a machine that has a particular market in mind.

Finnish maker Valtra has also been working on biogas technology for some years. Its dual-fuel biogas/diesel system is almost ready for sale and a T133 tractor with it was on show at Agritechnica. It was kitted out with extra saddle tanks and a modified intake manifold to allow it to run on either straight diesel or a mix.

When running in biogas mode 17% diesel is required to ignite the biogas in the combustion chamber and when you’re out of gas it’ll just switch over to diesel.

Gas tank capacity is 170-litres which equates to between three and five hours work while the standard tanks will still carry 165 litres plus 27 litres of AdBlue to keep things clean at the stack.

Valtra says that when running on a mix the six cylinder engine is significantly more efficient than when running on straight gas or diesel. With more and more biogas plants popping up all over Europe, fuel costs are reckoned to be cut by 10%-40% and for those wanting to be totally self-sufficient, the engine will also run on 100% biodiesel.