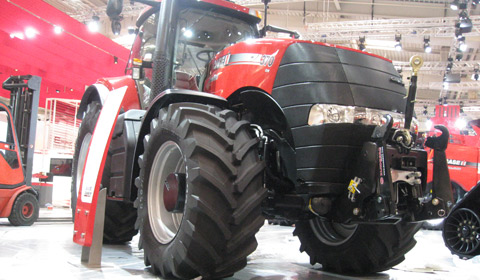 Case’s long-awaited stepless gearbox for its big Magnum tractors has officially arrived. Essentially based on the same principle as the firm’s smaller CVX tractors, the transmission is built at Case’s Racine tractor plant in the US. Able to handle more muscle than previous powershift boxes, the new CVT means max output for the range-topping Magnum now stands at 419hp.

Like most stepless boxes, it combines a varying degree of hydrostatic power with an element of mechanical drive. The original version developed by Case subsidiary Steyr used four mechanical ranges linked with a variable output pump/motor setup by planetary gears.

In that respect, the US version is no different except that all the components are considerably beefier and rather than being positioned at the tail-end of the driveline, the forward/reverse clutch-packs sit right up front.

Key advantage of shifting the shuttle clutches forward of the main gearbox is that they can be considerably smaller because they run at higher speeds and therefore aren’t exposed to such high torque loading.