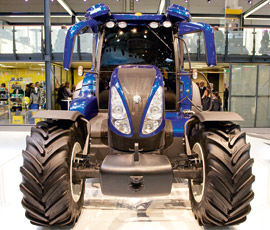 On the New Holland stand was the second generation of the company’s NH2 hydrogen fuel-cell prototype tractor.

This version is a radical step up from the original concept unveiled two years ago and will go into field-testing early next year.

Power output has been upped from 50kW to 100kW, so significantly more cooling capacity is required – hence the strange plastic mouldings up over the cab roof and down the rear cab pillars. These hide no less than seven radiators, responsible for cooling the fuel-cells, power electrics, back-up battery and motors as well as the air-con and hydraulic oil. It’s still a long way off from production, according to NH.