We pick out some of the highlights among drills and cultivators.

After several years in the farming wilderness, Kongskilde returned to Agritechnica with a flurry of new products after New Holland completed its purchase of the Danish firm in late 2016.

The deal included the JF Stoll and Overum brands, and meant New Holland also had a range of cultivation and mowing kit decked out in its own blue and yellow paintwork.

Pride of place on the Kongskilde stand was its new slatted mouldboard plough designed for sticky clay and soils high in organic matter.

The company reckons its four-slat XSD board crumbles the dirt more effectively and can marginally reduce horsepower requirements, too.

It’s designed to fill the trough left by tyres up to 710mm wide, has an adjustable furrow width of 30-50cm and an interbody clearance of 100cm. Reversible points are also included and should save a bit on wearing metal.

Power requirements extend to 220hp in really tough clay and buyers will have to fork out an extra £270 per mouldboard pair over the standard model. 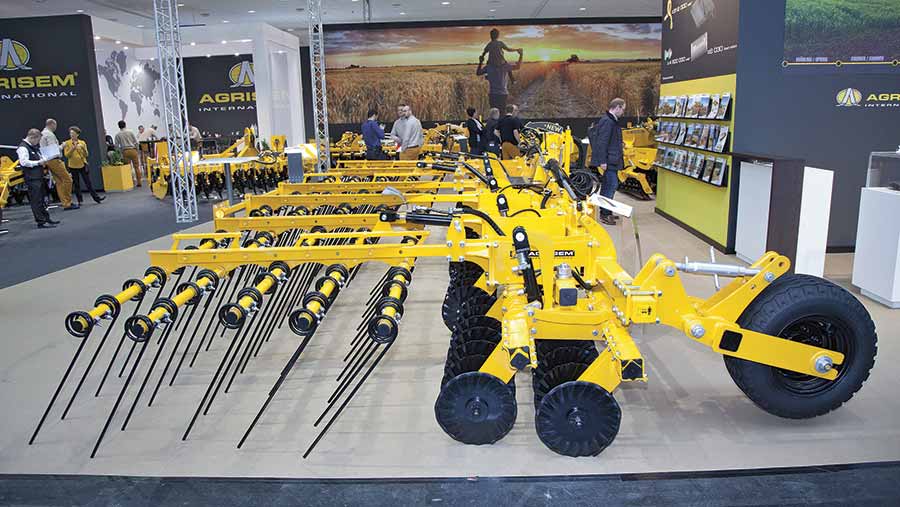 The French company, best known for its one-pass cultivators and heavy disc harrows, has added two rows of discs to run in front of the ranks of surface-tickling tines.

These are designed to stir up a bit more tilth than usual and help slice through stubbles and straw residues. A nifty manually operated system also allows the operator to tweak the angle that they run at (from 0-6deg) to vary how aggressively they rip up the ground.

The pitch of the rear tines is also adjustable using hydraulic ram spacers, and the rear two of those can be altered on turnbuckles to help produce a tidier finish.

Typical working depth of the 760mm-long tines is no more than 20mm and fast travel speeds of up to 20kph mean it should be capable of eating a lot of post-harvest acres.

However, the system is still in prototype form at the minute and is due to undergo more testing in the run up to its proper launch next year.

Direct drill fans looking to upsize without breaking the bank might like the look of Unia’s new 6m seeding rig.

The Polish maker, whose equipment is brought to the UK by North Yorkshire importer Manterra, was showing its Fenix 4000 for the first time.

The layout sees two rows of 460mm scalloped, rubber-damped discs tear up the stubble ahead of 800mm tall wheels that press it back down ahead of the seeding units.

The company makes its own double-disc, shell-type coulter assemblies that are spaced at 12.5cm intervals and fed by a pair of Meuller-metered distribution heads. There’s also the option of laying down fertiliser along alternate rows at the same time thanks to an internal wall in the 4,000-litre hopper. 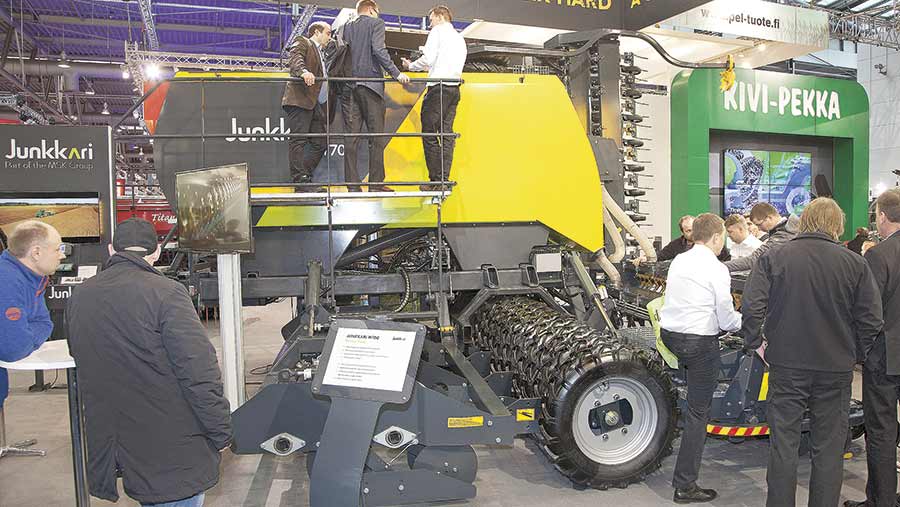 Finnish maker Junkkari went back to basics with its new 7m fully mechanical drill that does away with complicated electronic and hydraulic drives.

Rather than running an air system to blow the seed to the coulters, the W700 uses a time-proven gravity-fed arrangement; albeit with a bit more capacity than you might expect from a traditional box drill.

An auger carries fertiliser from the front section of the 6,500-litre tank to a rear tray that runs above the coulters across the width of the drill. The seed, meanwhile, is gravity-fed from its hopper cavity to a separate tray that sits parallel to the fertiliser one, and both are kept topped-up by ground-driven auger flights.

Each of the 44 coulters has its own metering device and the double-disc openers run 159mm apart, providing downward pressures of up to 100kg.

Their working depth is set on the rear press wheel, but the paltry 20-litres/min hydraulic flow required to run the fertiliser transfer augers means it’ll need as little 150hp on the front.

Novag was one of several drill-making debutants at this year’s show and its stand was dominated by a monster 8m rig kitted out with a rubber-tracked undercarriage.

The French-made T-Force seeder is the only machine the company makes and works by cutting a T-shaped slot in the soil to create a safe haven for the seed to germinate.

It can carry up to 47 separate coulters and the monster 18t frame can apply a downforce of up to 500kg for breaking into bone dry soils.

Total weight climbs to 25t with the 7,000-litre split hopper brimmed, so you’ll need something like a Case Quadtrac to stand any chance of pulling it. 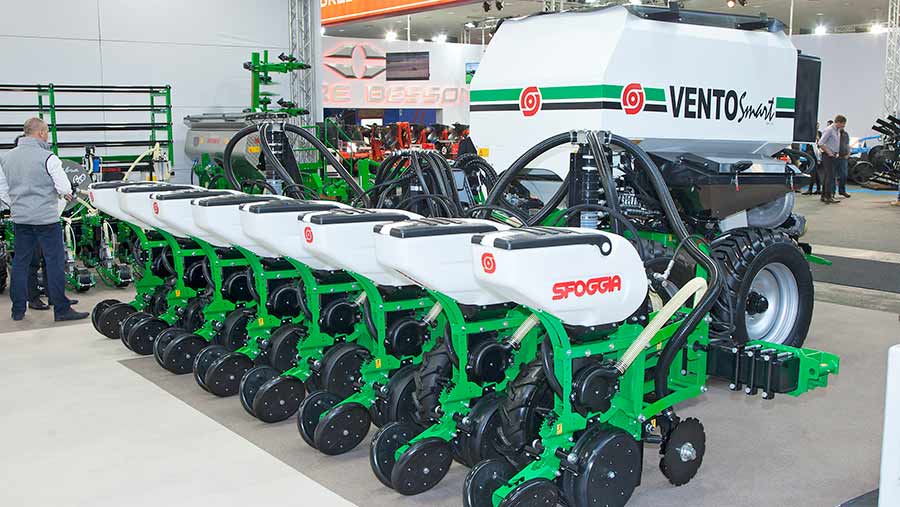 Twin-axle drills are something of a rarity across Europe, but being able to plant both cereal and maize crops from the same seeder should perk up the interest of many farmers in the UK.

The Italian-made VentoSmart drill is built by Sfoggia in Venice and has a fairly sizeable ace up its sleeve that involves undoing the U-bolts that hold the eight-row, 75cm-spaced maize planters on to allow the units to be removed and replaced with a cereal drilling bar.

The 4,000-litre seed hopper converts from a fertiliser carrier when drilling maize to a seed cart for cereal sowing, while there’s a 250-litre hopper for small micro granules.

Requiring around 120hp to drag it around, the drill is compatible with Isobus software that provides the option of individual row shut off for drilling maize.

Having a twin-axle arrangement helps spread the weight of the hopper, although the front axle isn’t steering so it could lead to some scuffing on headland turns when full of seed.

However, the twin axles are hydraulically extendable, so compaction is limited by not running them on the same tracks.

Imported by Exeter-based AMIA, the retail price for an eight-row planter is in the region of £62,000, and the cereal drilling bar will add a few thousand more to the price. 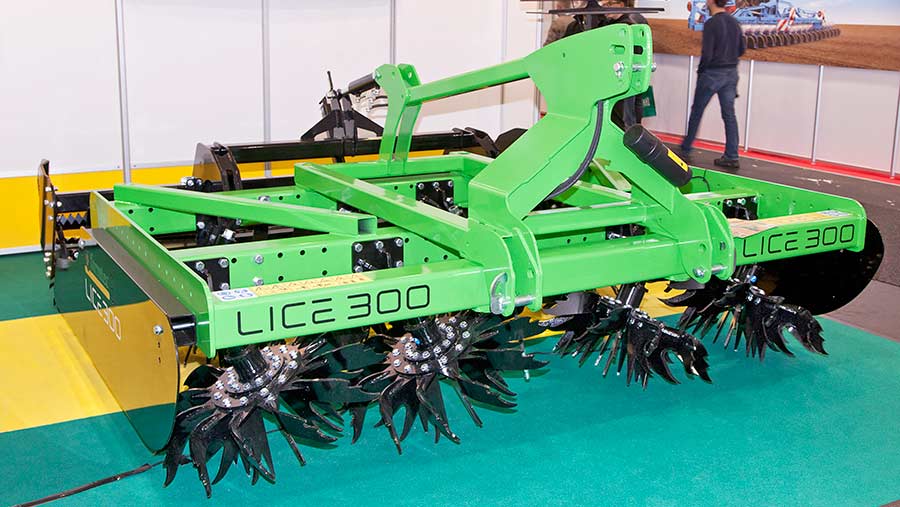 A brand new primary surface cultivator was shown by Italian firm Farmtec. The Lice cultivator comes in two widths of 3m and 6m, with the larger model hydraulically folding for road transport.

Both sizes feature weird-looking curved toothed digging blades that are grouped together on wheels, sitting at different angles to force the blades into the soil. The wheels spin with the forward speed of the tractor to mix the soil and trash to a depth of 10cm.

Details on the price and UK availability are hazy, though. 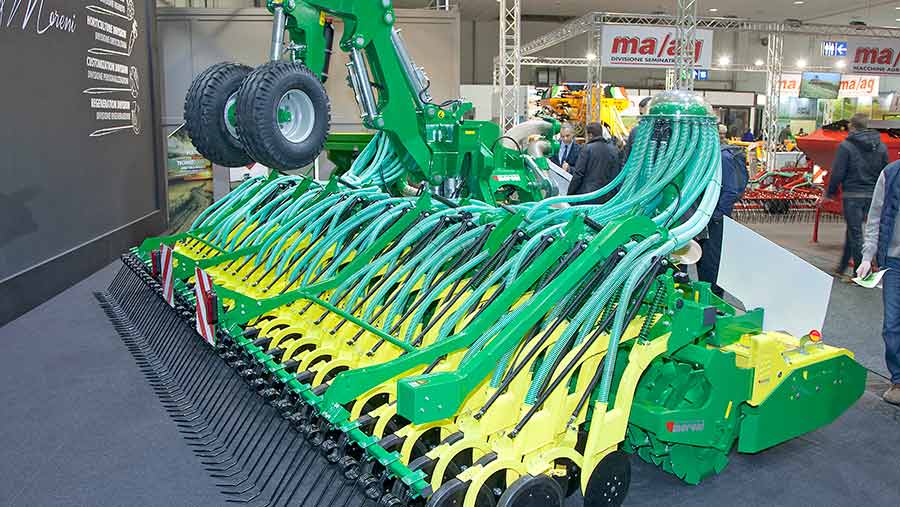 Built by Milan-based firm Moroni, the 6m hydraulic-folding power harrow can cope with as much as 500hp through the pto.

It also comes with wheel-track eradicators on the front, 26 twin-blade rotors underneath and a hydraulically adjustable packer. The firm’s own single-disc coulter arrangement is fitted at the rear, which is fed from the front-mounted hopper via twin distribution heads.

All up, the power harrow and coulter bar combo weighs 6.8t. To help take some of that weight off the rear links when travelling down the road, Moroni has come up with a novel transport wheel. This crane-style arrangement swings out and drops down at the rear to help support the load.

The wheel itself is articulated so that it tracks neatly behind the tractor and there’s a suspension system to help take out any bounce.

At the front, the hopper can hold 2,000-litres of seed and has an Accord-style metering system. The electronic side of the machine is handled by RDS controls. 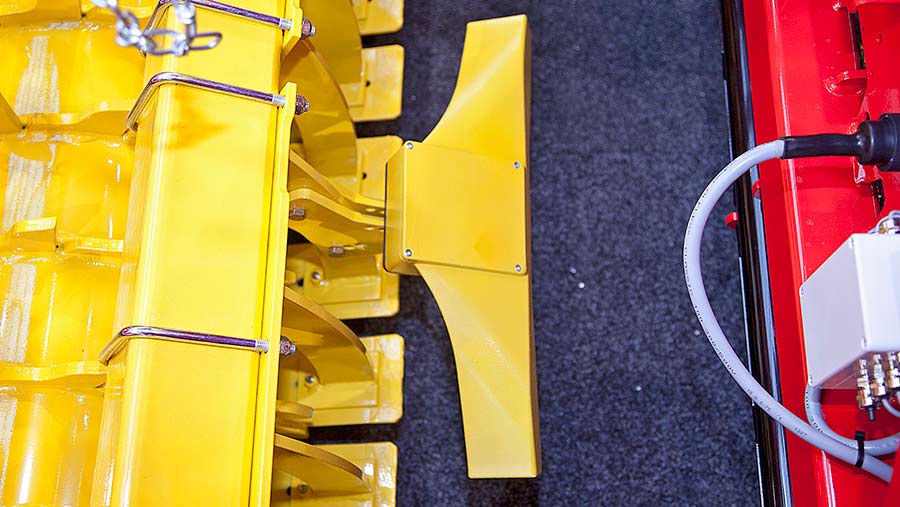 Pottinger has made the humble power-harrow combination drill a little more high-tech by designing a new automatic seed-bed preparation system.

Using a camera and sensor arrangement mounted on the back of the power harrow, the tool measures the coarseness of the seed-bed and works out how the power harrow settings need to be changed to improve it.

This then communicates with the tractor, telling it to adjust pto speed and forward speed until the ideal conditions are achieved.

The system has been developed in conjunction with New Holland. At the moment it will only work with one of its Auto Command CVT tractors fitted with Isobus 3.

However, Pottinger says this type of tractor implement management (TIM) could be extended to any brand once a universal standard has been established.

Continuing demand for massive North American drills in Eastern Europe and Russia prompted Canadian firm Bougault to bring one of its sizable seed carts to Agritechnica for the first time.

But despite its huge proportions, the 19.4cu m 7550 pictured is the smallest in the range, with the largest capable of stowing more than double that quantity. Often these bigger machines will run on dual wheels or tracks all round teamed with disc coulter assemblies up to 100ft wide.

In most cases, the hoppers are split into four sections, which are filled with the integrated auger. Typically these will be filled with seed, two types of fertiliser and sometimes an inoculant. The sections can also be merged if needed. 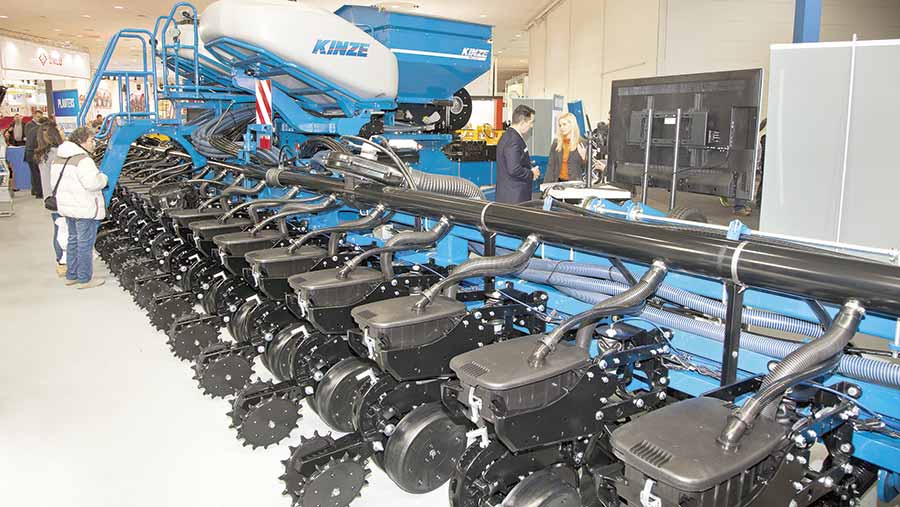 There’s also the option of adding a 5t granular fertiliser hopper or liquid equivalent. This feeds a row of independent fertiliser disc coulters that place the product between the crop rows.

Base models come with mechanical wheel drive to the seeder units, but more sophisticated electric drive is also available. Buyers also have the choice of gravity-based seed metering or the maker’s vacuum system.

The machine will be sold from the Kinze’s base in Lithuania, which it set up five years ago to cope with growing demand in the area.