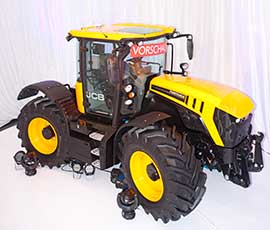 One of the biggest unveilings at this year’s Agritechnica show was the new baby Fastrac from British manufacturer JCB.

The swanky 4000-series slips into the shoes currently filled by the ageing 2000-series, but according to the maker it shares very little of the old family DNA.

That means power now comes from a 6.6-litre Acgo/Sisu engine that delivers more power and torque than the Cummins it replaces. This will be tuned to pump out 160hp in the smaller models and 220hp in the big ’uns.

Torque has also shot up to 1,000Nm. Emissions are dealt with using the usual Agco/Sisu SCR system that makes it clean enough to satisfy Tier 4 final limits.

It’s all change in the transmission department, too. Gone is the old semi-powershift and in its place sits a two-range Fendt CVT box. This has a top speed of 60kph and is operated using JCB’s armrest-mounted joystick.

All of this is slotted into a new chassis that’s slightly longer than the old one, but quite a bit narrower. That means the turning circle is considerably tighter and there’s more space to fit a loader.

It also means bigger tyres can be fitted without reducing the turning circle – JCB reckons customers will opt for 600/70R 30s.

The new JCB’s suspension is also a lot more sophisticated. A single hydro-pneumatic system is available as standard and there’s an option to upgrade to double-acting.

This does a better job of keeping the tractor level when heavy loads are dumped on the front or back. It will also kneel down to making it quicker to fit demount kit on the back.

A four-wheel-steer set-up is still available on the options list and it’s been given a simpler control switch borrowed from the Loadall. There’s an auto mode, too, that will flick from four-wheel steer to two at higher speeds.

Drivers also get treated to a completely new cab. This has a one-piece windscreen for better visibility and opening rear-quarter windows to let some air in. There’s even an optional roof window for those that want a loader.

The interior has had a complete overhaul and there’s now a colour screen from the bigger 8000-series cabin.

Because a lot of Fastracs get fitted with demount sprayers, JCB now offers a carbon filter to keep the air chemical free. Other nice cabin touches include an electric fridge drawer under the passenger seat and some well-thought-out storage.

Lift capacity is also much better than before, with the rear links rated at 8t and the front 3.5t. JCB says the changes make the 4000-series much more capable in the field than the old model.

The official launch of the 4000-series will take place next year and machines will start making their way on to farms in September 2014.

Keep up with the latest news from Agritechnica