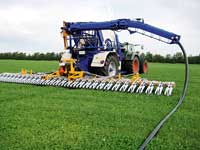 Instead of the usual tanker injector format, slurry is supplied to the injector umbilically via a series of hoses and pipes, meaning the unit can keep spreading over up to 40ha of land in one go. When it’s time to move to the next block, there’s no need to empty the pipe, either.

Weighing half the normal weight of a standard 25t slurry injector-plus-tanker setup, the SRS 12 can get on the land earlier than conventional spreaders, says Agrometer, resulting in better nutrient take up. Benefits also include less odour, less mud on the road and reduced travelling costs.