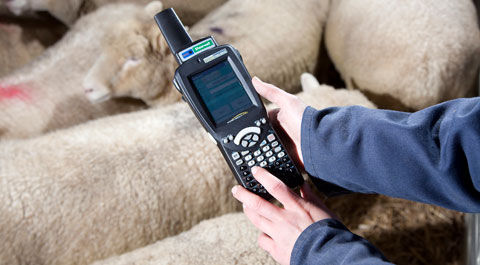 When you consider that the UK has over 33 million sheep – a figure which puts it in the top 10 countries of the world in terms of population – keeping tabs on their whereabouts is a challenging task.

But it’s also an essential task and one which was highlighted in the 2001 Foot & Mouth outbreak when the absence of adequate movement information was considered to have been instrumental in the spread of the disease.

Anxious that such a situation should not be repeated, the European Commission made proposals aimed at improving the traceability of sheep.

Recognising that the manual recording of individual tag information was not an option, particularly when such high numbers of sheep were being handled, it was agreed that an electronic system should be introduced.

The system, which is mandatory for sheep born in Britain after 31 Dec 2009, calls for the use of an electronic programmable identification tag – EID – to be placed in the left ear and backed up by a visual identifier tag which is placed in the right ear.

For those who prefer not to uses EID tags there is the option to use boluses, which sit in the rumen of the sheep.

The electronic identification (EID) tag – is actually a small transponder, not dissimilar to those used to prevent expensive products being stolen from high street shops.

In this instance, the transponder triggers an alarm when it passes through the reader/scanner.

The transponders (transmitter-responder) used for sheep ID, unlike most other ‘domestic’ transponders, will work when wet are activated when the reader emits a low frequency signal.

When the reader transmits its signal the tag responds by sending its programmed information back to the reader.

This results in a simpler system due to it not being necessary to pick up the weak signal emitted by the tag when the strong activating field is working. The disadvantage is that the HDX tag cannot transmit while the activating field is switched on.

With Full Duplex, the tag can transmit immediately while in the presence of the activating field which means that tags can be read more quickly and more often.

Every tag is unique and is programmed with an exclusive number.

Supplied by DEFRA, the numbers kick off with the country code which is followed by a zero before the five-digit registered flock number is given. Last in the queue is the actual sheep number which follows on in numerical sequence.

The electronic tags supplied by Somerset-based Symtag, for example, one of a number of companies providing programmed tags, are made in Singapore.

They arrive in packs of twenty – ten yellow transponder tags and ten green visual tags. Each yellow and green tag is clipped together before being placed in a wooden holding tray which positions them under the electronic programming probes.

At this point the controlling computer sends the appropriate signal to the probe which down loads it into the transponder – it takes only a few seconds.

Worked in batches of ten pairs the final stage is to use a laser to print the number visually on the tags – both of them. From then on, the two tags remain clipped together so that when they come to be used, the sheep receives the same number in both of its ears.

Some sheep farmers opt to tag their lambs from birth – particularly those who intend to use the lambs for breeding. For others, it is a task performed just prior to sending the fat lambs to market or the abattoir. 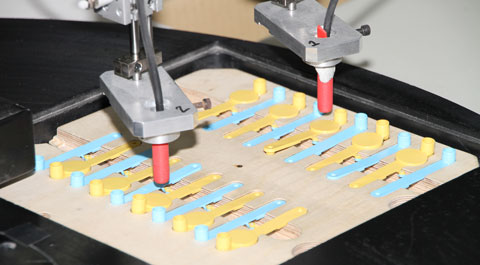 While markets do have tag readers their accuracy can’t be relied on and it is worth bearing in mind that it is the farmer’s responsibility to ensure that their sheep movements are accurately recorded.

Also, some markets have decided to cease tag reading, meaning producers will have to invest in a reader.

When it comes to choosing a reader the choice is generally one of a stick reader or, for those handling high numbers, a hoop or side panel reader (pictured).

When purchasing a reader (transceiver) check they can handle both HDX and FDX technologies – which, to be fair, most do.

For a reader that can store information which can be used as an aid to flock management – and this is the route many producers are now embarking on – it would seem that a reader costing upwards of £1000 is going to be required.

There are, of course less expensive versions, which do not offer such a degree of sophistication.

When it comes to panel readers – those which can be used in a race to read tags as sheep pass through – the cost is considerably high and is likely to be in the £2000 plus zone for some models.

Fair to comment that there are more than a few readers on the market and we provide a selection of what models are on offer.

RS320 hand held EID stick reader can be used for both sheep and cattle and will read HDX and FDX EID tags. It comes with a bluetooth printer capable of storing up to 4000 EID tag reads. The Handheld EID Stick Reader transmits up to 10m to the printer which will produce a print out of all animals read. The printout can then be pasted into the movement register as a record of movements.

This data can be imported into a spreadsheet or into the PC as a text file and the printer comes with a very simple PC package that imports/exports data to and from the printer allowing spreadsheets to be populated.

• Rechargeable batteries allowing up to 8,000 reads between charges and allow for cable free operation

• Equally suitable for cattle and sheep

The latest development from Ritchie is the XRS Stick Reader, which is claimed to have one of the fastest read range and largest memory than any other stick reader on the market.

• Communicates via bluetooth or cable

• Reads all HDX and FDX-B tags.

A passive stick reader which will read both FDX-B and HDX tags. Battery power can be from 6 to 12 VDC or mains supply.

• Low-cost, simple to use and extremely rugged

• ISO Compatible with both FDX and HDX technologies

The Shearwell Stick Reader is simple to use, links to a mobile printer or downloads to a computer for your farm movement records. This unit is ideal for those that want to record movements only, it is not for full management information. Economical option for capturing EIDs.

• Rugged design for on farm use

• Allowing a full days work without a battery change

The APR500 is the latest hand held reader from Agrident. It is an updated version of the APR350, with an improved layout, better connectivity, improved functionality and built in blue tooth.

Like the APR350 it can run data collection tasks, but also has a mode for rapidly reading sheep in a race or pen, (one button press).

The FarmIT 3000 software provides direct download and processing of the collected data, with specific user interfaces for the Agrident readers.

•Scale mode collects weighing data from major brand scales via RS232 or Bluetooth and save them with the ID.

• The APR500 can be used with external stick antennas allowing one-hand operation.

The Gallagher SmartReader is comfortable to hold and has a trigger action to initiate tag read.

A protective hand guard and slim design also reduces risk of trapping a hand or arm in animal handlers.

• Internal memory for 5,000 tags for later download to computer

• Last tag scanned is displayed at power up

• Compatible with Gallagher SmartScale (models 500, 700 and 800) and other brands of EID capable weighing and data collectors. 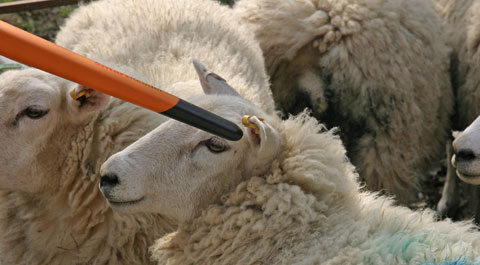 The latest development from StockTrace is the StockTrace Basic reader which includes a portable thermal printer.

StockTrace aims to provide the solution for farmers to comply with the new regulations, combining EID Tag Readers integrated with a web-based database which offers a complete and secure Holding Register and AML Form management.

By attaching a Thermal Printer to this Reader, it is possible to print out an instant list of scanned EID Tags while out in the field. These can be attached to Movement forms and Holding Registers to prove 100% compliance.

The full suite of StockTrace Linx software can be added later and the equipment is fully compatible. 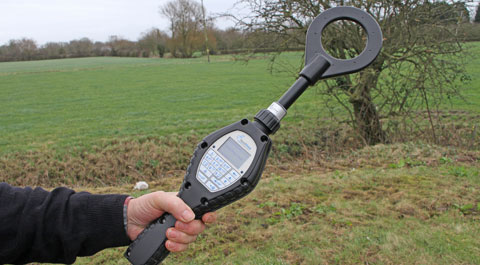