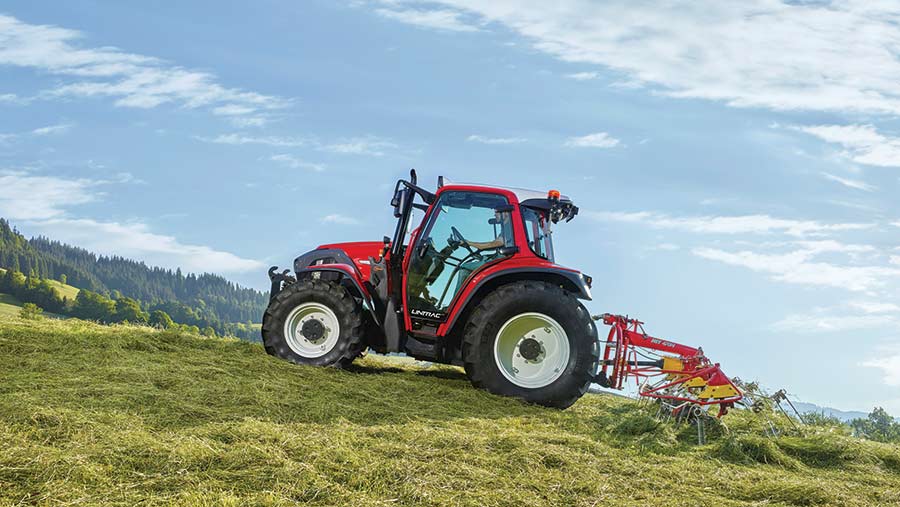 Lindner might be a little-known name in UK farming circles, but it accounts for a healthy chunk of the tractor market in its home country of Austria and it’s slowly expanding its sales across Europe.

Last year the mountain tractor specialist produced more than 1,400 examples of its Geotrac and Lintrac ranges, plus a further 200 of its specialist Unitrac transporters.

But it is the latest version of the Lintrac that the maker hopes will garner some interest among UK farmers.

This has been designed with a clever four-wheel steer design and lower centre of gravity, making it safer to use on scarily steep banks.

The Lindner family has been building tractors at its Kundl headquarters in the mountainous Tirol region of Austria for almost 70 years.

The family company has an export rate of 50% and employs a workforce of 220.

It enjoys a market share of 14.1% in Austria, and reached second place on the Austrian market for standard tractors in the first seven months of 2015.

The company’s overall sales in 2014 were worth €77m (£56m) and it mostly exports to Germany Switzerland, France, Italy and Slovenia.

It is 100% owned by the Lindner family, with Hermann, Stefan and Rudolf Lindner heading up the company.

In 2014 Lindner produced 1,400 Lintrac and Geotrac tractors as well as 200 Unitrac transporters.

Lindner currently has 300 dealers, each with a target of selling 10 to 20 machines a year.

Because it was designed to cling on to the side of rocky Alpine meadows, the maker reckons it should be able to cope with the terrain on the average UK hill farm.

So far there is one machine working in Ireland that was sold by Dublin-based dealer Plant Systems, says David Lindner, the company’s marketing and export sales manager.

“We are currently looking for UK dealers, but we think the Irish market is the toughest to crack, hence why we wanted to focus there first.”

Mr Lindner says the company has had plenty of enquiries from hill farmers in Scotland, Wales and England, which is encouraging news for when they put a dealer network in place.

Lindner started building the updated Lintrac series in 2014, and it claims it is the first standard tractor to feature a steering rear axle.

This means it can perform tight turns without scuffing up the grass and reduces the need for lots of dangerous shunting backwards and forwards.

To further improve its hill performance, the maker mounted the engine further forward and the cab as low as possible. Together this helps keep the centre of gravity close to the ground and in the middle of the tractor to reduce the likelihood of tipping over.

So far the maker has produced just one model of Lintrac – the Lintrac 90 – but plans are afoot to further develop the range with a 150hp machine.

That means it should have plenty of grunt for starting off on steep banks. The engine can also run at a reduced speed when there is less load to help take the edge off the fuel bill.

The engine is mated to a smooth CVT transmission from ZF. This was selected over a more traditional gearbox so that operators don’t have to worry about swapping cogs and risking ending up in neutral.

But to help improve efficiency, the transmission still has a high proportion of mechanical drive.

So far Lindner has built more than 220 Lintracs and it hopes to up production in 2015.

The 72ep and 102S models are new additions to the Unitrac transporter series. The 72ep, the lightweight starter model for alpine agriculture, is driven by a Perkins four-cylinder engine providing 75hp at 318 Nm torque.

The hydraulics are tailored to the requirements of the farming industry; the versatile equipment carrier with the proven four-wheel steering is optionally available.

The Unitrac 102S is made to measure for urban applications, as it fulfils the requirements of the latest emissions regulations.

However, there is a new machine under development that merges the Lintrac technology with that of the Unitrac.

At the moment the Lindner technicians are intensively working on a new Unitrac model – the 112 LDrive. For this transporter, the continuous technology of the Lintrac is being adapted for the transporter field.

The Geotrac series four currently consists of eight models – from the Geotrac 64, which scores on steep terrain, through to the high-performance Geotrac 134ep, which, with its 144hp, is the most powerful tractor in the history of the agricultural machine specialist from Tirol.

The technical highlights of the tractors include the panorama comfort cab, the vibration damping, the front hydraulics and the high-performance hydraulic system with its separate oil circulation system.

All tractors are equipped with Perkins engines and a good relationship has been built over the years between Perkins and Lindner.