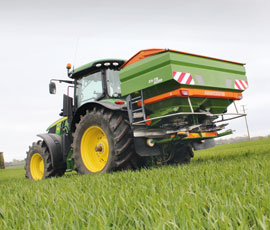 Until recently, fertiliser spreaders cost a few thousand pounds and were one of the more primitive pieces of kit in the back of anyone’s machinery shed.


But times have changed – rudimentary pto drives have made way for fuel-efficient and whisper-quiet hydraulic power, meaning operators can now chuck fertiliser accurately across 54m.

Amazone’s Sima-launched ZA-TS range is a good example of the improvements. Maximum output has doubled to nearly 11kg/sec, the weighing system takes 400 readings per second to keep accuracy tiptop, and a new border-spreading system should stop operators from landing tons of caviar-priced fertiliser in the bottom of the hedge.

There are two hopper capacities – 3,200kg and 4,200kg – and a hydraulic cover as standard, so it’s no surprise that this is a machine designed for big-acre farming.

The lower half of the hopper is pressed out of a single sheet of steel with ridges and folds to bolster strength. Fertiliser falls through a double teardrop-shaped hole in the hopper bottom. The size of this adjusts according to the application rate – as the size of the hole changes so does the position that the fertiliser falls on the vanes.

At low application rates the fertiliser falls on the centre of the disc. That means it spends more time on the vane, gathers more pace and gets flung further.

At high rates – with the teardrop-shaped shutter almost fully open – the fertiliser is dropped anywhere between the centre of the disc and 3-4in along the vane.

Amazone has come up with a new system that redirects the fertiliser on to shorter vanes, rather than adjusting disc speed or attaching a limiter or border disc.

At headlands the central section of each vane pivots forwards by 10deg, changing the flow of fertiliser towards shorter fins to reduce spreading distance. The length of the mini-vanes can be adjusted depending on the tramline width you’re working on. There’s a choice of two headland spread patterns. ‘Eco’ mode lands the fertiliser 2m short of the boundary, while ‘normal’ mode tries to keep spreading tight to the hedge-line.

If necessary, the operator can fine-tune the disc speed without altering the position of the shutter and Amazone reckons this new border spread system can increase yields on headlands by almost 15%

The 12.4in Amapad is Amazone’s answer to the sometimes brain-numbing Isobus question.

Set-up takes two minutes – the operator enters the tramline width, target forward speed and product information (which affects the shutter position). Once the spreader’s up and running the weigh cell sends out 400 impulses every second to the Amapad, constantly working out the quantity of material being chucked out the back.

In the future Amazone aims to be able to monitor both spread pattern and weather on the move. That could mean disc speed is adjusted according to wind or the condition of fertiliser, improving accuracy still further.