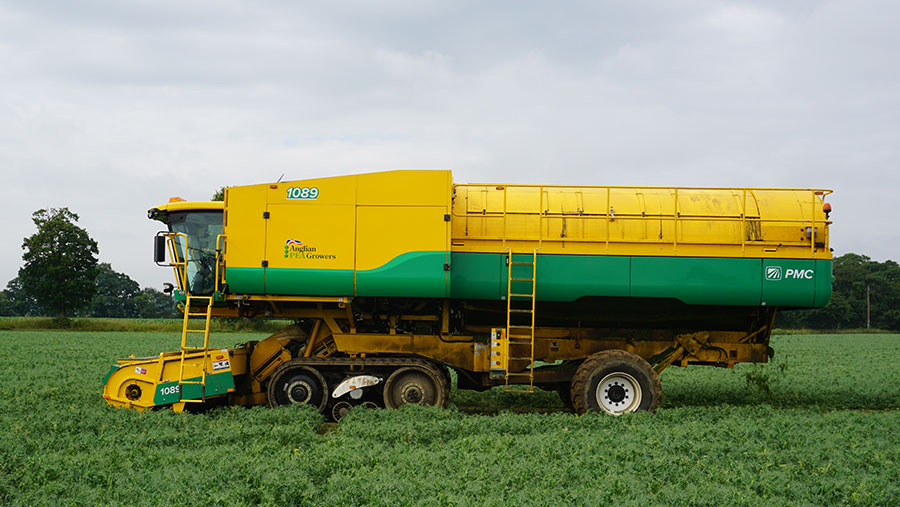 Pea vining is well under way in East Anglia and spearheading Anglian Pea Growers’ (APG) fleet for the 2017 season is a brand new PMC 1089.

APG has been a long-term user of wheeled PMC machines but its latest acquisition runs on Claas Terra Trac belts instead.

The group has flat fields and big distances to cover – 75 miles from Ipswich to north of Norwich and 32 miles from the coast inland to Stowmarket – which is a workload that would traditionally favour wheels.

However, increased worries about compaction during wet early summers has persuaded APG to try out tracks instead.

“A set of six tyres will cost around £8,000 compared with a pair of tracks at £12,000 and the latter requires more frequent replacement, but we spoke to a number of other vining groups and the message was clear – once they had tried tracks, they did not look back.”

The group runs a wheeled 1089, as well as two older 989s, so is in a good position to compare and contrast.

Ride quality is more comfortable too, according to driver Roger Bloomfield, but there is a slight loss of manoeuvrability.

New models have seen a Scania 444hp engine replace the old Deutz block and APG notes a 20% improvement in fuel economy compared with the wheeled 1089. That said, AdBlue claws back some of the cost advantage.

The one other big change to the machine is the bright green and yellow colour scheme of PMC parent Oxbo Group, instead of the traditional red and white. On a machine costing around £450,000, however, colour is unlikely to be top of the buying criteria.