Having been building combines since the 1940s, Vassalli has traditionally stuck to straw walker machines. But with demand growing in South America for rotary harvesters, the company has developed its own. That has led to a joint venture with Deutz Fahr. The Argentine company now builds a lime green version of its rotary for Europe, which uses a 450hp Deutz V6 rather than the 350hp Cummins engine employed usually. 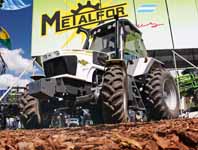 Metalfor had an impressive line-up of kit on offer. With factories in Brazil and Argentina, the core business is sprayers. But in recent years it has acquired a combine factory and developed its own tractor. Currently there is just one model in the range – the 1050 DT – but bigger versions are planned once the company has found a transmission supplier. For now, the gearbox comes from Carraro, while the engine is a Cummins power-plant. The company has greatest success in its home markets but exports to 17 countries including Russia, Kazakhstan and Australia.

While it was no shock to see the likes of Claas, John Deere and New Holland peddling their wares, it was a bit of a surprise to see Belarusian harvester maker, Gomselmash, displaying its FS80-2 forager at Argentina’s premier machinery show. Although the build might be basic, it boasts a 448hp Mercedes V8 and eight-row maize header. It isn’t cheap either – it retails for US$320,000.

Probably Argentina’s biggest tractor maker, Pauni, has a pretty wide range on offer. As well as building motorised graders, it manufactures conventional tractors from 120hp to 180hp, artic machines from 200hp to 305hp and a specialist transport tractor that bears more than a little resemblance to an MB Trac, with coil-sprung front axle and four equal-sized wheels. Everything bar the Cummins engine and Bosch hydraulics is built in-house, according to the company.

While self-propelled sprayers are a common sight across Argentina, specialist spreading machines don’t feature as heavily. But this year sprayer maker Tedeschi is testing a prototype S-P spreader tractor.

With either Deutz or John Deere 150hp engines and a five-speed Eaton gearbox, the high clearance machine carries a 5500-litre twin disc applicator that will spread material up to 36m.

With its strange ferris-wheel-esque rotating seed hopper, this slightly clumsy-looking machine is designed for refilling drills with seed and fertiliser. As the main hopper agitator turns, it rotates the seed drum, mixing it as an insecticide dressing is applied. Two hydraulically-driven augers then transfer both seed and fertiliser to the drill.

With Argentina’s cattle numbers reckoned to be more than 50m, it’s no surprise there was plenty of cattle kit on show. But it’s not all high-tech stuff. The majority of handling equipment, races and crushes are built from heavy South America hardwoods and weighing is done with an old-fashioned brass balance-scale.

As in Europe, it’s vegetable kit that takes the prize for eccentricity and ingenuity. This awkward-looking machine is a Tecnoga melon, squash and pumpkin harvester. The driver sits in a low-level seat that slides left-to-right to keep him over the row. He then plucks the crop off the ground and slings it over his left shoulder into a rotating brush cleaner. It passes through that on to a trailer towed behind. A 33hp Brazilian-built diesel engine provides the power.