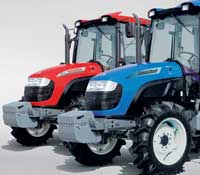 Argo Tractors, maker of McCormick and Landini tractors, has announced a new range of 22-91hp compact and utility tractors following its agreement with Korean manufacturer Daedong.

Under the deal, Argo Tractors will adapt and complete the units at its premises in Italy and North America for onward sale through selected McCormick and Landini distributors.

Argo Tractors has been selling compact tractors up to 55hp in North America and South Africa over the past five years and also in Spain and the UK. The new tractors will be on sale in the UK from Spring 2011 at McCormick and Landini dealers.

Daedong tractors are already imported into the UK under the Kioti name by Rustons Engineering and sold through 60 dealers. It says that it will continue to sell the whole range of Kioti’s into the UK, as well as providing service and backup, and will also retain import rights for the Mechron utility vehicle.