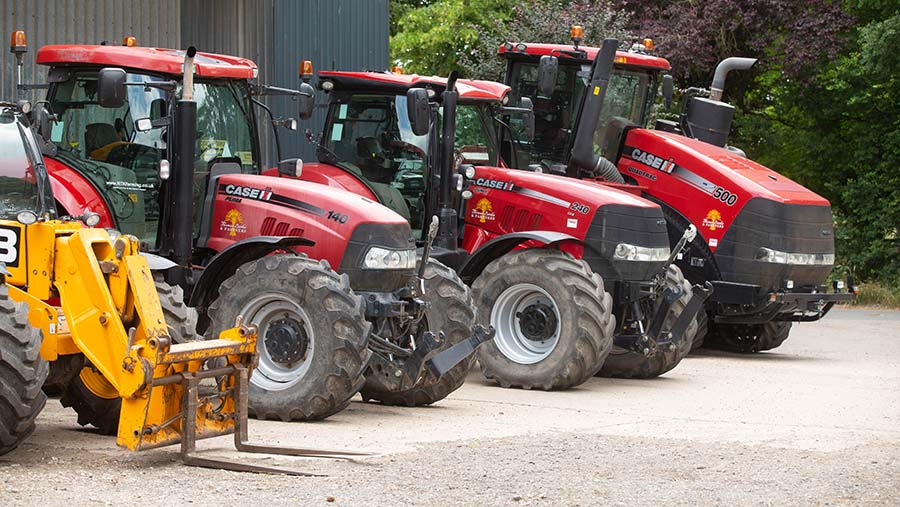 East Anglian auctioneer Cheffins recently held an online auction of the machinery from two large farming families that had both decided to change their future business plans.

Edd Banks stopped in-house farming 18 months ago and has since let all his land to a local contractor.

While he admits that he will miss sitting on a machine this summer, from a business perspective, the decision was actually an easy one as the huge investments needed in farming only generate marginal returns, no matter how good you are at it.

The sale was due to take place at the end of April but had to be pushed back, however Mr Banks said he was pretty happy with the prices and only has the self-propelled sprayer left to sell.

He reckoned the buyer of his Quadtrac saved nearly 50% on buying a brand-new machine, which begs the question why more growers aren’t purchasing quality second-hand kit this way.

He plans to focus on the farm’s diversification projects including the RTKFarming business, wedding venue and industrial units, all of which he found tricky to juggle alongside farming 1,200ha.

Bedfordshire based Richard Kendall made the call to downsize his acreage from 2,200ha to a more manageable 1,290ha, when he stopped farming a block of land some 12 miles away from his base. The family had contemplated the decision for a number of years and made the call when a long-standing employee retired.

The sale included all the machinery that was surplus to requirements, with Mr Kendall retaining a self-propelled sprayer, tractors and one of the two combines. Carrying on with the larger acreage would have required investment in two high-powered tractors along with other machinery so downsizing has felt the right move, especially with the challenging year.

Mr Kendall’s sale was due to happen on the 30 April and he says the process has been so much easier as there hasn’t been a requirement to host hundreds of people and provide car parking space, with the prices around what he expected.

“The number of bidders registered online and the quantity and level of the bids received demonstrates that there is substantial demand for good quality second-hand kit”, said Oliver Godfrey, who led the sale for Cheffins.

“We’ve sold over £8m worth of machinery in the last six weeks and we have a very busy calendar of on site sales already scheduled for the Autumn when we hope to host physical event, but these results clearly demonstrate that bidding online is no barrier to the final outcome”.

All lots were subject to buyer’s commission of 3.5% and VAT at 20% on top of the hammer price.

A top-spec Case-IH Quadtrac 500 was the prime mover for Thomas Banks and Partners in Cambridgeshire and came with a modest 2,271 hours on the clock. The 2016 model appeared well looked after – it had been on the farm since new and still had some of the 3,000-hour warranty intact. 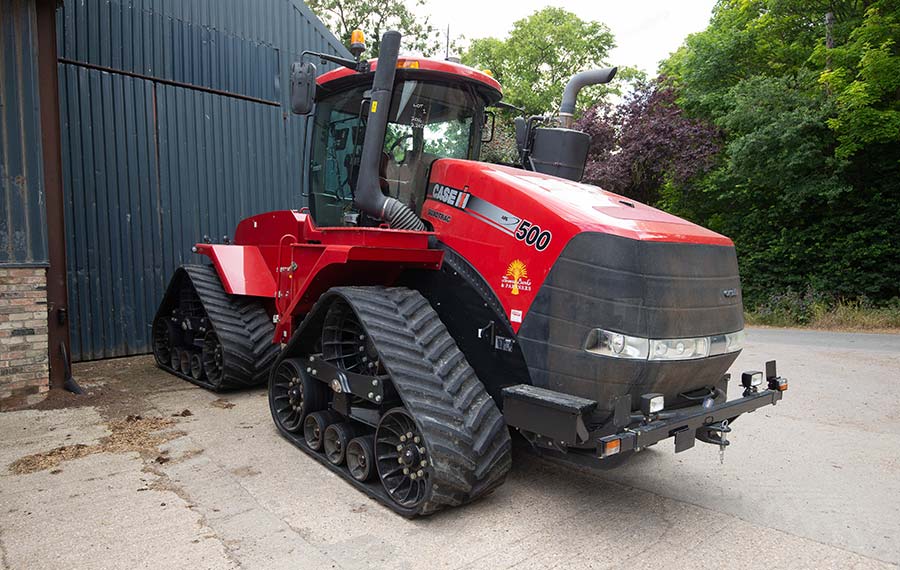 Extras included a leather seat and deluxe cab, full GPS and Pro 700 screen, and a 360deg light package. The final hammer price represented a decent saving on a new machine and matched a similar model sold at the Rainthorpe Farms dispersal in Lincolnshire last year.

For WJ Kendall and Sons, a 2014 Fendt 939 was the biggest tractor in the fleet and featured the usual Fendt tech with a Vario gearbox and 60kph road speed. It also had Fendt’s Variogrip tyre pressure monitor for heavy draft work and a set of 1,000kg rear wheel weights. There was a front linkage and the cab was a top-spec Profi Plus unit with auto guidance. 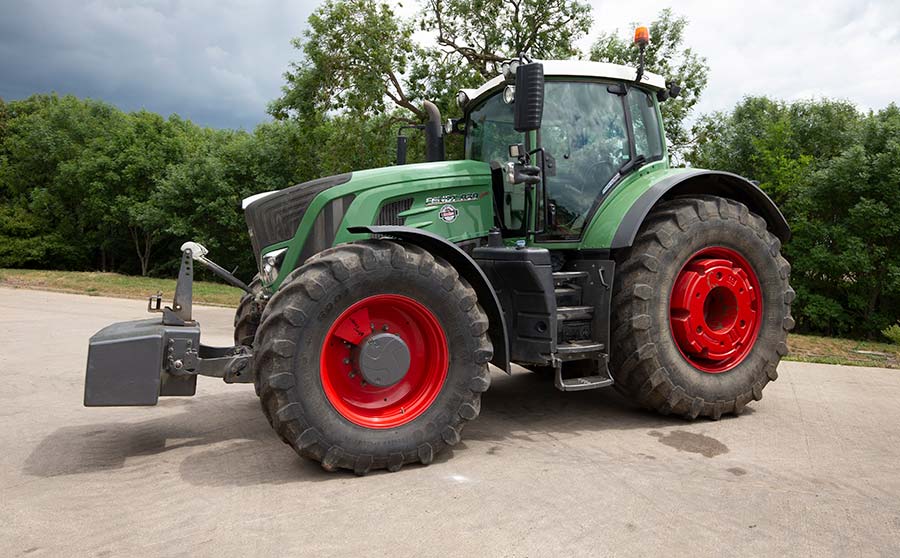 The second high-powered machine in Bedfordshire was a 2012 twin-track John Deere 8360RT. It had been on the farm since new and clocked 6,591 hours, averaging just over 800 a year. It came with mid-mounted weights, was Greenstar ready and looked to have had some fairly recent track replacements. 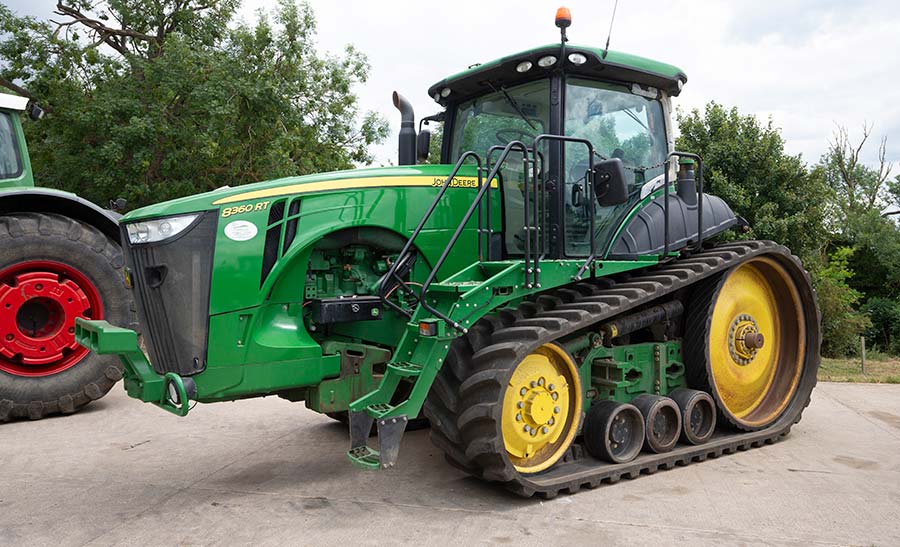 A brace of well-used John Deere 6830s went under the hammer, with the older 2008 model sporting the slightly posher 40kph Auto Quad gearbox and 6,187 hours on the ticker.

The 2010 model had clocked 5,460 hours and ran the simpler 40kph Powr Quad transmission. This model had the added bonus of being Greenstar ready and fitted with some fairly new BKT tyres. 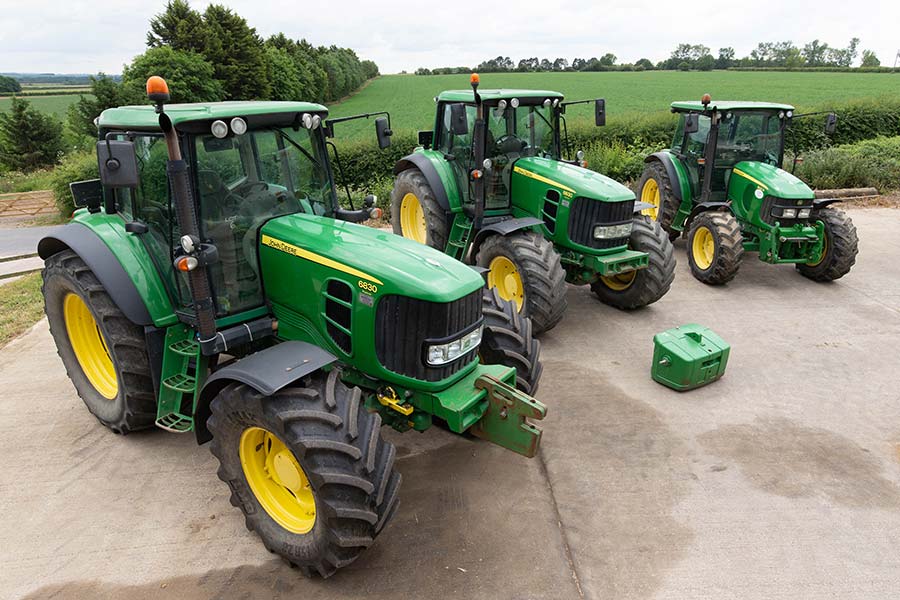 The smallest tractor on offer at the Kendall sale was a 2011 John Deere 5100M. The machine had a LaForge front linkage and three manual spool valves. A respectable 4,519 hours were on the clock and it looked in decent condition.

A fully-loaded Case-IH 240 had a 50kph CVX gearbox and a host of extras including a deluxe cab, auto-steer and Isobus, Pro 700 screen and front linkage. It also featured front and cab suspension and had a modest 3,051 hours on the clock. Tyres were half-worn and it was fitted with an LED light package.

Those after some retro horsepower were treated to a rough-and-ready example of Case’s MX 240. It was well used, having amassed 7,520 hours, and came with front weights and fat 710/70 R38 tyres on the rear. It had an 18-speed powershift box with left hand reverser and park. The exhaust sound alone meant it was worth the purchase price of £18,000, but it also looked like good value power. 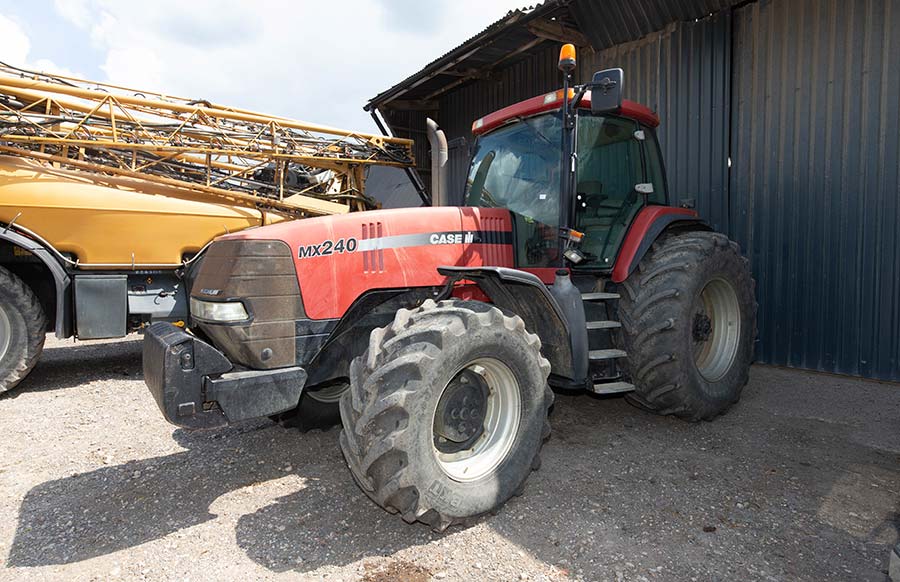 The first of the two combines up for sale was a 2013 Claas Lexion 770 with 35ft header. It was fitted with the German firm’s Terra Tracs and APS Hybrid technology. The Kendalls had owned it from new and, during that time, is had completed 2,192 engine hours and 1,589 drum hours. 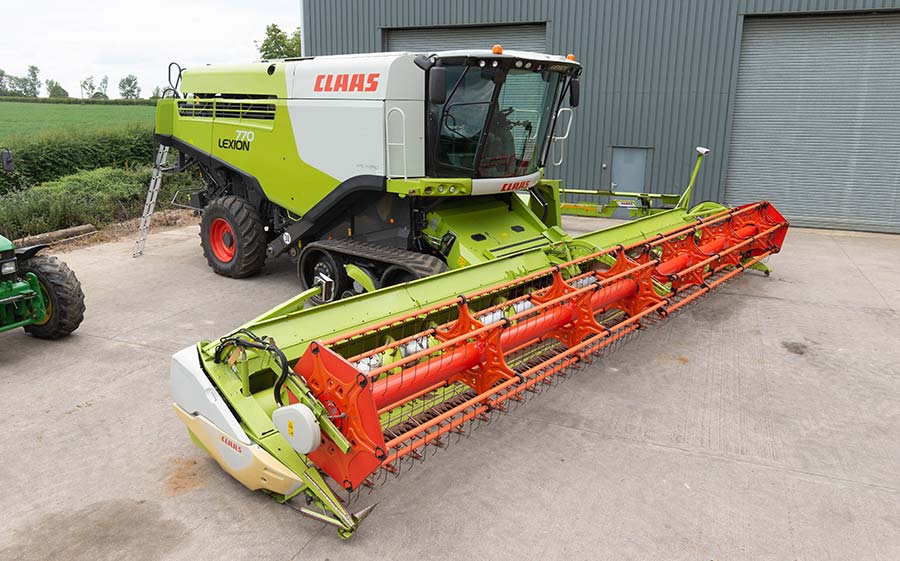 Another 35ft combine was up for grabs from Thomas Banks and Partners. The Case-IH 9120 was fitted with AFS, RTK auto-steer, Pro 700 screen and air compressor. It came with a Shelbourne Reynolds header trailer and had been on the farm since new. Engine hours were at 2,929 and it had done 2,308 drum hours. 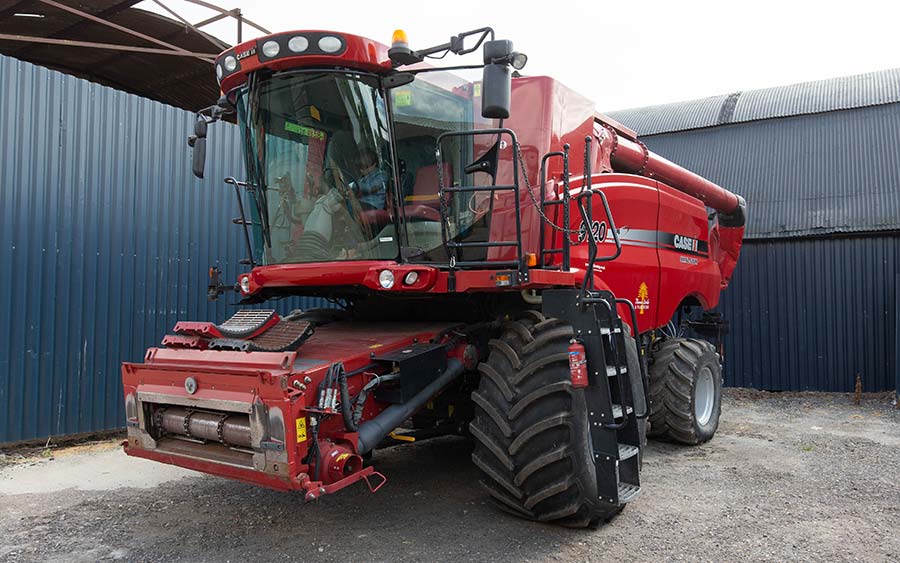 Handling the spraying in Cambridgeshire was a Cat Challenger Rogator RG655 self-propelled with a 5,000-litre tank and 36m boom. The machine would have been state of the art when it was new in 2011, with 3in intake pipe, auto section control, dribble bars, extendable axles and onboard air compressor and hose.

However, with 6,338 hours on the clock, the bidding was less than enthusiastic and even with three sets of nozzles and four Michelin 710/60 R38 tyres and wheels, it failed to meet its reserve, finishing up at £50k. 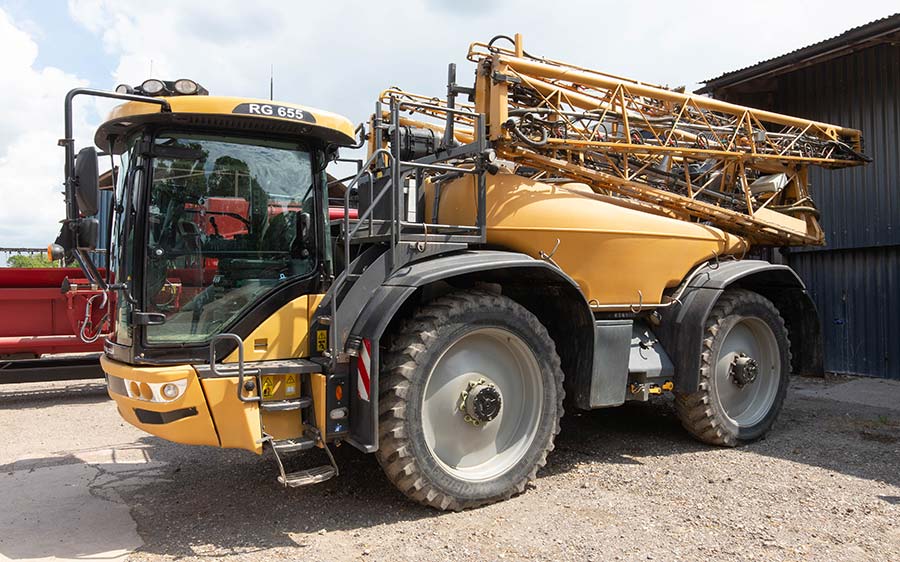 A 2009 version of Deere’s 5430i self-propelled sprayer had seen its fair share of work in Bedfordshire, with the booms certainly showing their age after 6,057 hours. 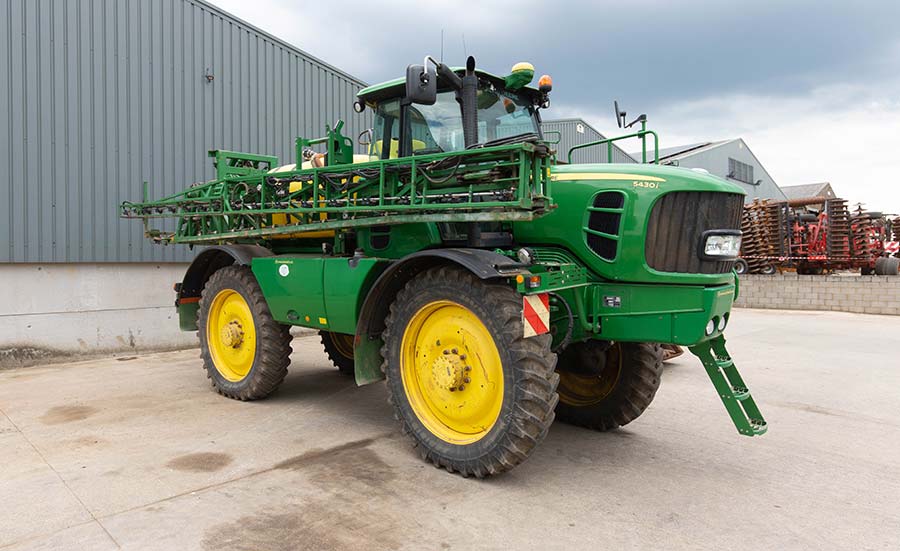 Included by permission of Thomas Banks and Partners was a decent looking JCB 541-70 telehandler. The 2010 model had 5,519 hours, air conditioning and four-wheel drive and steering.

A single-axle New Holland square baler had been with Thomas Banks since new and in that time has pumped out 51,788 bales. It looked in good condition for its age and sold for an undisclosed amount. 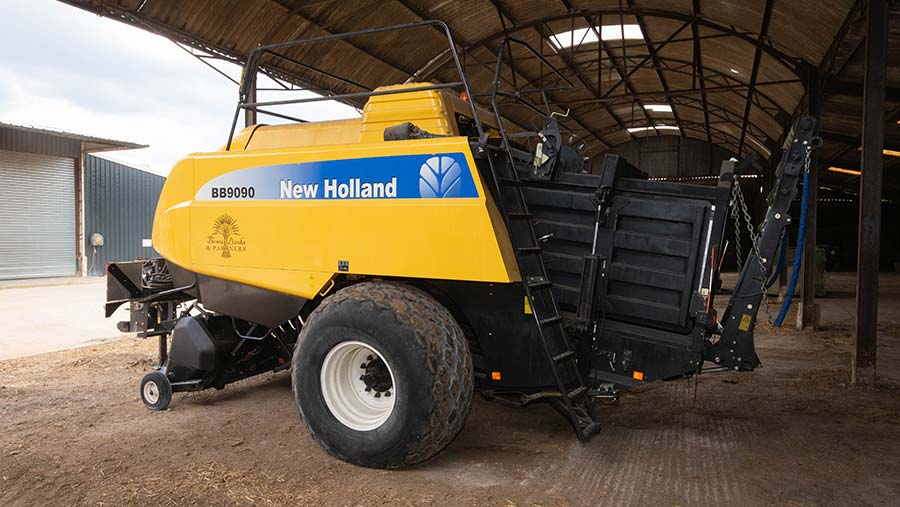 A lesser known make of folding 12m Cambridge rolls made by Yorkshire based NRH Engineering in 2003 came complete with a slug pelleter and Avadex pipes already connected up. 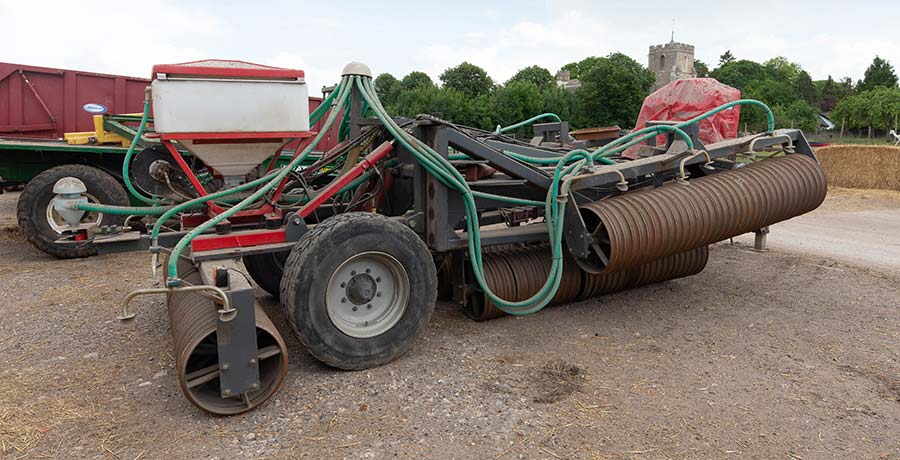 Along with all the powered machinery was a host of cultivation kit available from the Kendall sale.