Auctioneers Clarke and Simpson shifted more than £1m worth of machinery as it held the first part of a double-headed sale at the end of June, selling off roughly one-third of the machinery used by Strutt and Parker Farms.

The East Anglian company sold its 8,000ha farming interest to investment firm Robigus last year, and the new owner has disposed of virtually the whole fleet of inherited machines and implements.

Instead, it has decided to go for a “unified” approach across the farms by almost solely using frontline equipment provided by JCB, John Deere and Horsch.

See also: What next after Brexit boom for machinery sales

“The full line-up of existing machinery was due to be sold at the start of June over two days, but due to social-distancing measures, this was abandoned in favour of an online setup,” said James Durrant from auctioneer Clarke and Simpson. “Interest had been strong, with the phone busy in recent weeks”.

The machinery ordered by Robigus has inevitably been delayed due to factory shutdowns, leading to the farm “retaining some 30 tractors, a number of self-propelled sprayers and 12 telehandlers to see out the harvest”. This will be dispersed at another sale in the autumn.

Interested parties could view the kit beforehand, but all bidding was online, with the new format affording buyers more time to make measured bids over a five-day period. All prices listed exclude the 1% charge imposed by selling website iBidder and VAT at 20%.

The existing combine fleet consisted of no fewer than six Claas Lexions, which all returned to the manufacturer. However, there were two other machines up for grabs.

On the front was a 25ft 625R header and it had a Shelbourne Reynolds C7500 twin-axle header trolley. The auction continued for more than half an hour after closing as a number of bidders battled it out to secure the combine.

Offers crept up by £200 a time and after each new bid the clock was reset to a two-minute countdown. 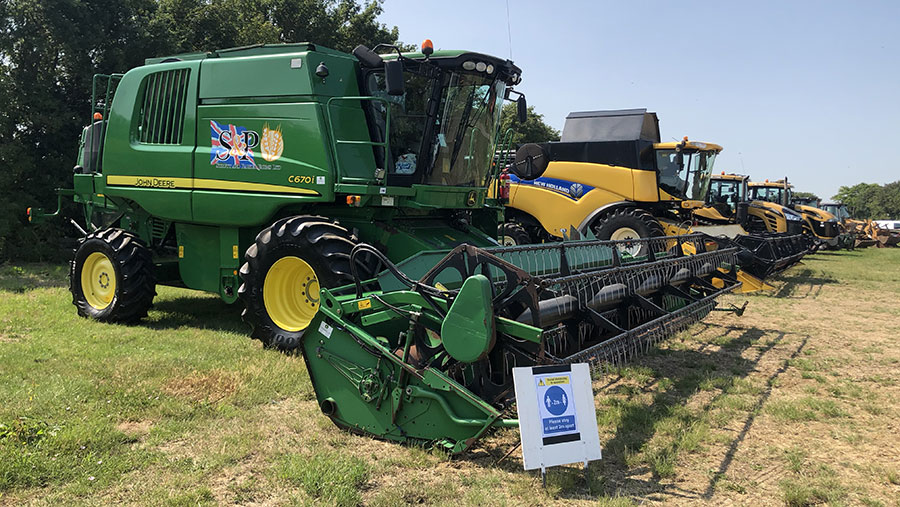 The front and rear wheels had about 90% tread and the header was sat on a Shelbourne Reynolds C9000 four-wheel header trolley. Surprisingly, the first bid was only registered about an hour before the auction ended and it failed to meet the reserve, selling privately later that day.

The newer of two Challenger machines was a 2014 model with 5,006 hours on the clock. The MT775E looked to have had recent 30in track replacements, as there was 95% tread left.

It also had the benefit of a Zuidberg front linkage, five spools, drawbar, idler weights and a Trimble guidance system. It fell shy of the reserve and sold after the auction.

A slightly older ’61-plate Challenger MT765C had 5,427 hours and looked in slightly worse condition. This was most noticeable on one of the tracks that had the metal bracing showing through, meaning a replacement would be required fairly urgently.

It had a host of extras, including Farmforce front linkage, four spools and Topcon guidance. 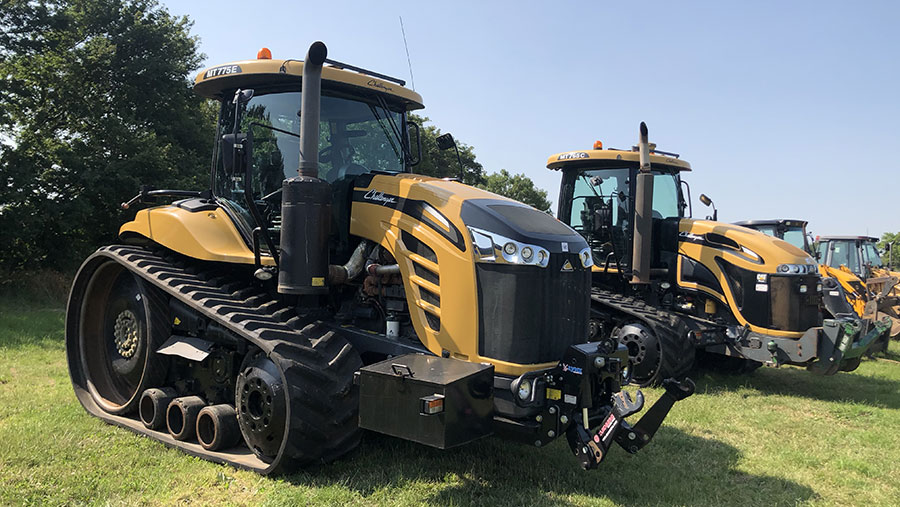 The only telehandler on show was a 2013 Manitou MLT 735-120 with a fairly modest 3,637 hours. Tyres had about 70% tread left, and the machine came with a pick-up hitch, third service, hydraulic locking Sanderson headstock and pallet tines.

The seat covering had broken on the leading edge, but it looked a bargain at less than £25,000.

Another lot that continued on after the 12pm deadline was this 2005 JCB 3CX, which was the newer of two backhoe loaders on show.

The hours were unknown, but it came with the four-in-one front bucket and pallets tines, while the rear arm had extender dig, pipes for a breaker, and ditching and digging buckets. 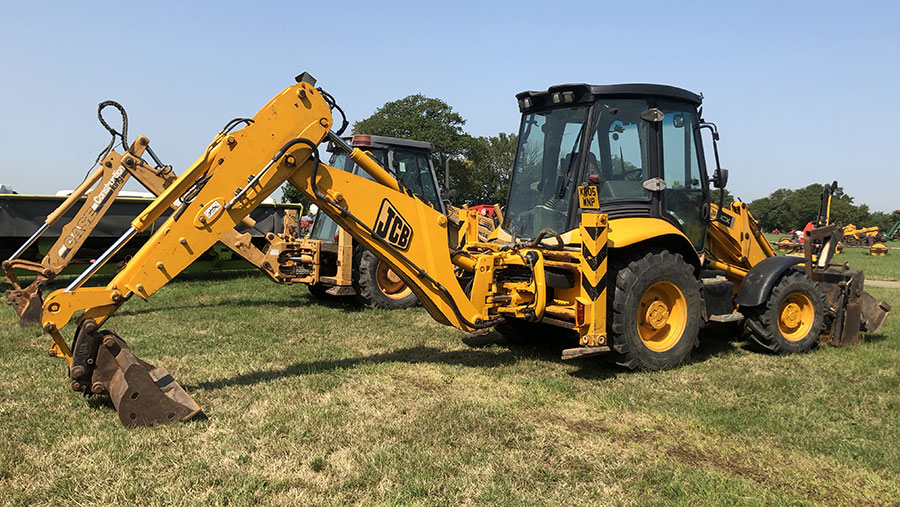 Clad in their working clothes was a brace of 2009 Ford Transit Connect T220 vans. Both had three seats in the rear for transporting five workers, with the 95,000-mile model sporting a full MOT. The harder-worked 110,625-mile version only had a ticket until July.

It connected to the tractor via a Scharmuller ball and spoon hitch.

Bidding initially struggled and, with about 20mins to go, it sat at £17,000 with the reserve not met. However, the final figure exceeded the auctioneer’s expectations (though still represented a hefty depreciation). 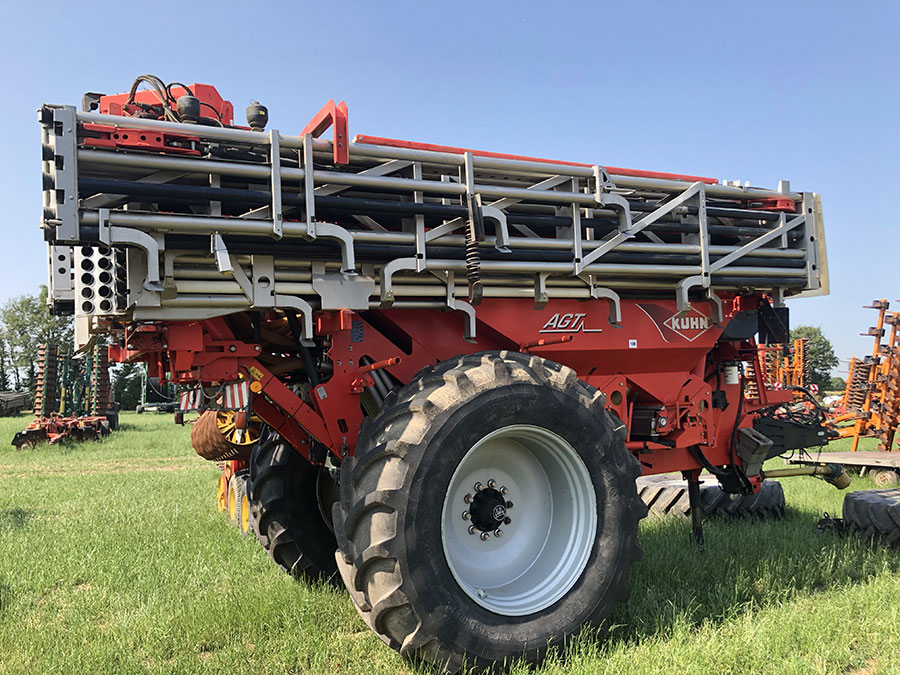 There looked to be strong interest in the machine and it was subject to more than 30 bids, as the final price represented a big saving from buying new. 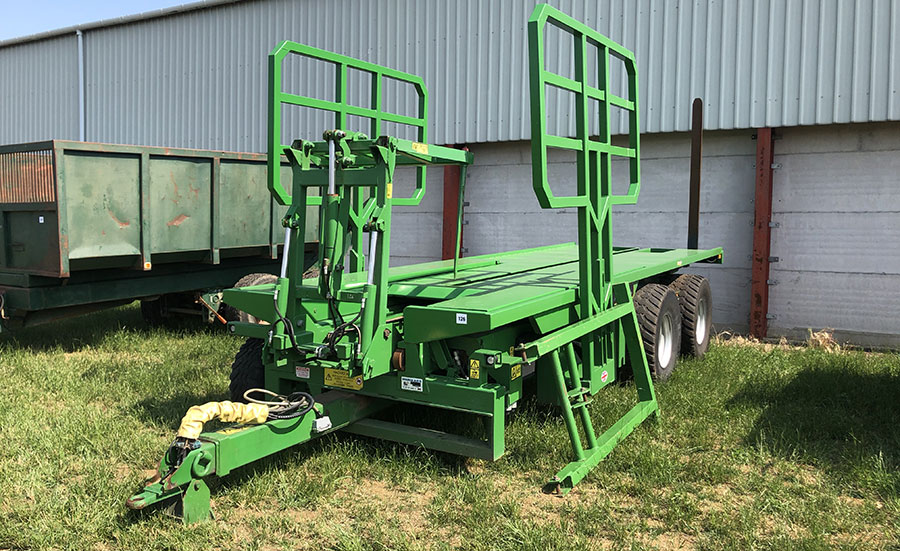 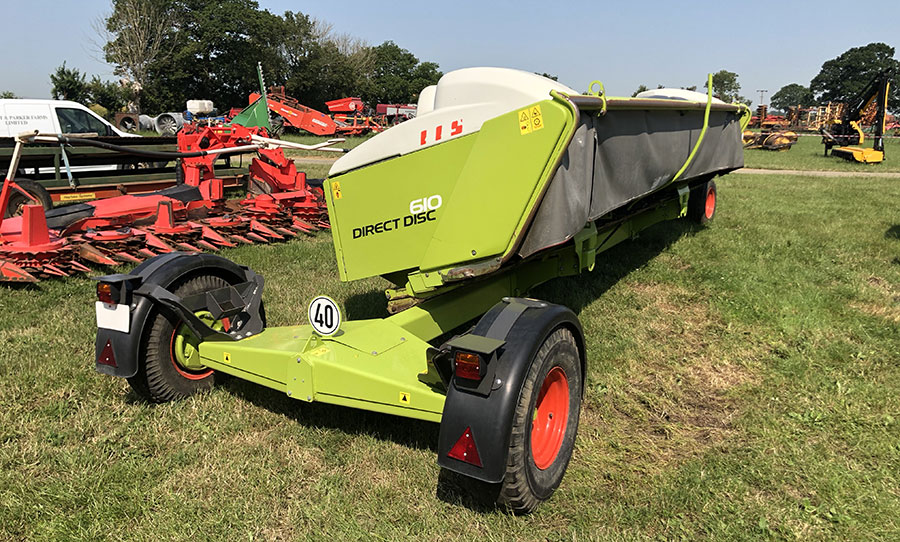 There was a rare chance to buy a couple of Claas Jaguar forager attachments with this Claas 610 wholecrop header alongside a Kemper 12-row maize front.

The 2015 Claas Direct Disc had a 6.1m-wide cut and came with its own four-wheel turntable trolley, while the folding Kemper 375+ was a slightly older 2013 model. 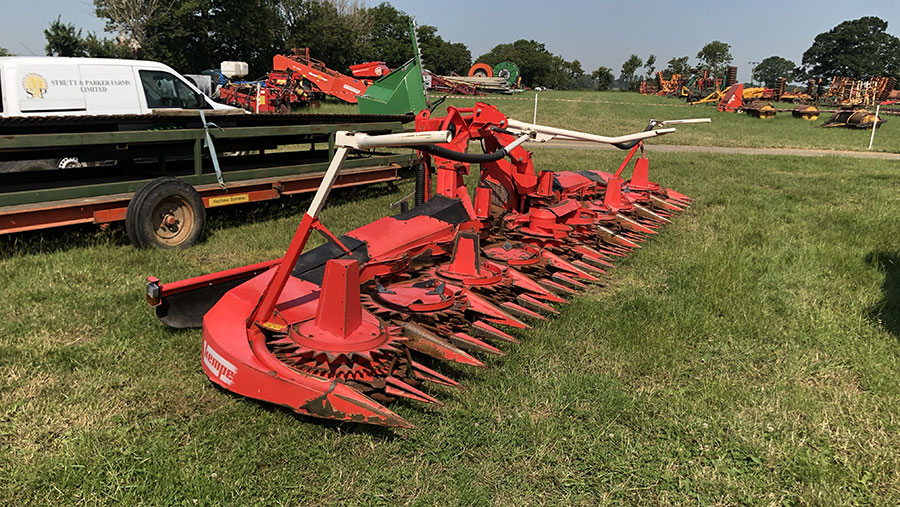 A host of trailers were up for grabs from Griffiths, Fraser and Richard Western, the pick being a smart 2014 Griffiths 14t twin-axle tipper with hydraulic tailgate. Other nice-to-have extras included a sprung drawbar, air brakes and super-single wheels and tyres. 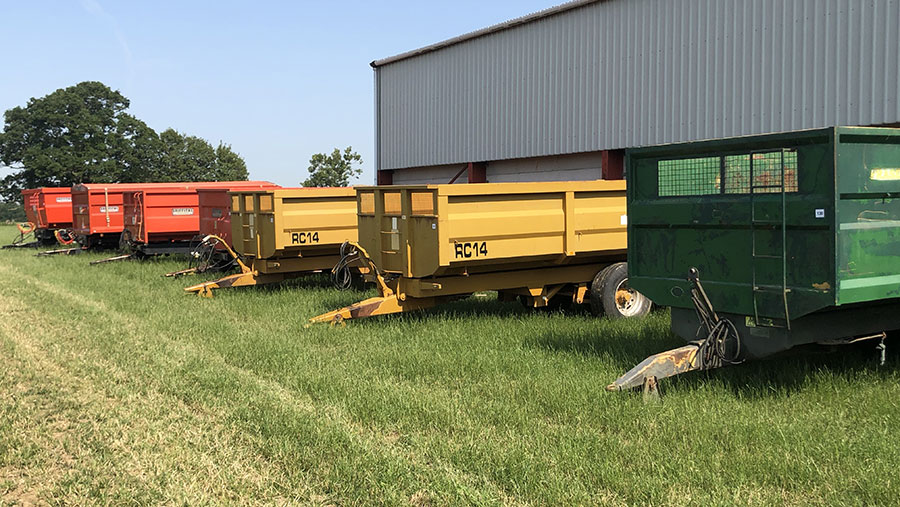 Arable growers are starting to see the advantages of having these serious reels as back-up to ease pressure during dry springs. The top price was paid for a 2011 Irrimec ST6C reel and gun. 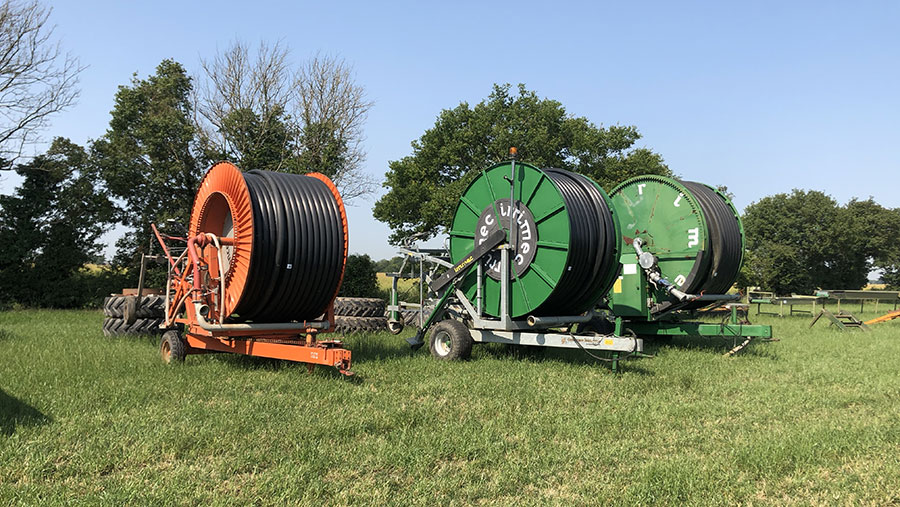 Vaderstad Rapids are still common across the UK’s eastern counties and there were two up for grabs at this sale, with another brace due at the autumn dispersal.

The older 2008 6m model had covered 4,861ha and had tramline markers and radar control, while the larger 2012 8m unit had the bonus of wheel track eradicators, but had tallied a hefty 11,000ha.

There were a host of heavy draft cultivators on offer that looked decent value for buyers with the power to pull them. 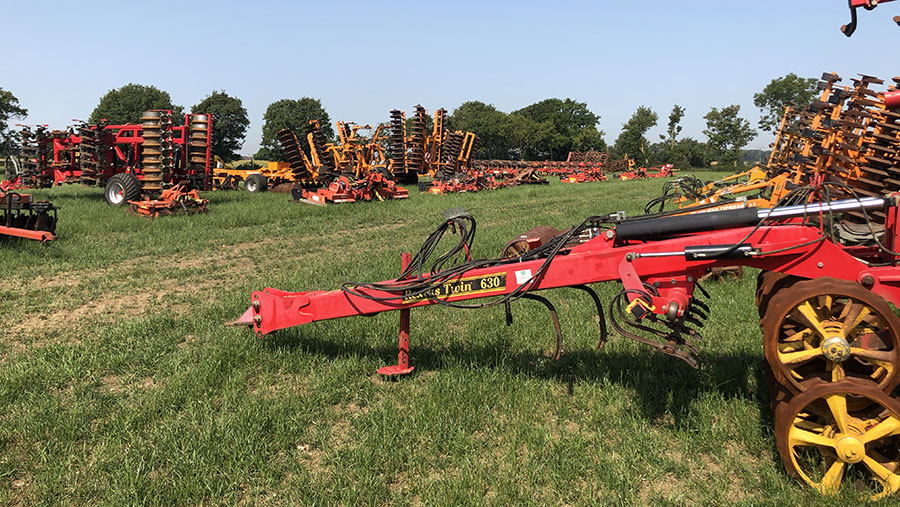