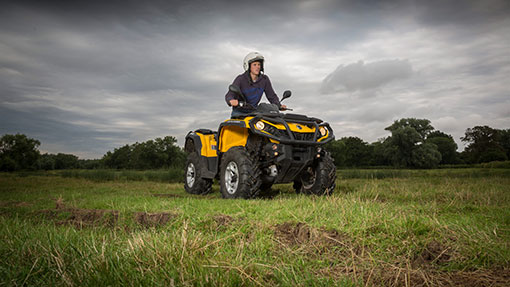 The perception that electric vehicles are worthy but slow, dull and boring is being challenged by a farm-based manufacturer and his growing range of EcoCharger quads.

Fred Chugg launched the two-wheel drive Dominator last year after putting out half a dozen examples for extended evaluation; it has since been joined by the four-wheel drive Eliminator.

The EcoCharger quads use mass-produced body panels and the chassis is also from an established quad design but heavily modified to accommodate the batteries and other electric drive components.

A military-standard electric motor is used and said to be 94% efficient, while regenerative braking puts juice back into the system when driving down a steepish slope.

Unlike the chain-driven two-wheel drive Dominator, the Eliminator 4×4 has shaft drive front and rear switchable between two- and four-wheel drive for steering lightness when extra traction is not needed. Lockable diffs at both ends add to the machine’s traction capabilities.

With the batteries mounted low and ahead of centre, the Eliminator is said to generate a lot of grip to exploit the high torque electric drive and the layout helps with stability too.

A four-speed transmission provides top speeds up to 36mph or so; range is typically 38 miles per charge, says Mr Chugg, depending on how much of the performance potential the driver uses.

Ingeniously, the 4×4 can be converted in about half an hour to a six-wheel drive machine with a tipping load box. The add-on section bolts to the chassis of the 4×4 and picks up drive from the crown wheel and pinion in the back axle; separating the two takes about 20 minutes, reckons Mr Chugg.

An electro-hydraulic pump and tipping cylinder dispenses the contents of the load box, which is stepped to extend over the quad’s load rack. The back and rear sides drop down when simple latches are released.

Other quad manufacturers are also giving their quads extra load-carrying capability – perhaps as an attempt to head-off growing sales of side-by-side machines, sales of which in Britain are expected to soon overtake those of quad bikes.

The Can-Am Outlander 1000XT is based on the marque’s latest generation chassis, extended to include a second driven rear axle carried on independent trailing arm suspension.

Drive is permanent to the two rear axles, with front drive being engaged when the rider needs it. An ultra-low gear for the belt and variator CVT transmission provides extra pulling power – the vehicle is rated to tow up to 750kg – and a locking front diff adds to the tractive capabilities.

Power steering with three levels of assistance will make life easier for the rider.

The sizeable flat load deck above the rear axles can be fitted with uprights for carrying logs and similar loads or clip-on sides and a drop-down tailgate. A large hidden drawer beneath the deck will be useful for stowing chainsaws and other vulnerable equipment.

Given that the vehicle is powered by a petrol-fuelled Rotax 1000 V-twin engine developing 82hp, the Outlander 1000XT shouldn’t lack performance. It also has a built-in security system with a key-activated immobiliser.

If six-wheel drive is too big and too expensive, then perhaps the Landmaster from TGB of Taiwan is a better bet.

The TGB Landmaster 550 EFi / EPS has a 503cc single-cylinder petrol engine, four-wheel drive via a CVT transmission and adjustable power assistance for the steering system.

Disc brakes front and rear are designed to stop the quad when fully-laden, and it comes equipped ready for legal use on the road.

The new Arctic Cat 700 TBX is less of a load lugger but it does have a 135kg capacity tipping cargo box plus lidded compartments in the rear bodywork.

It is powered by the US manufacturer’s own 695cc single-cylinder petrol engine, driving through the Duramatic auto transmission, which comprises a centrifugal clutch that engages as engine speed rises; that means the primary clutch remains engaged with the belt at all times, which is said to reduce belt wear.

Selectable two- and four-wheel drive and front differential lock give levels of tractive capability suited to different conditions and there is electric power steering with three levels of assistance.