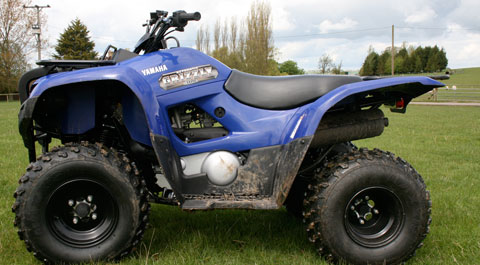 The Yamaha is a gutsy machine, with plenty of torque and acceleration. Although it lacks the finishing touches of the Kawasaki, features like the load bay are strongly put together, however overall build quality isn’t quite as good, with some of the plastic looking a little flimsy.
It’s a good-looking vehicle, and has a capable towing and load carrying ability.

Thirty-something years ago, the first quad bikes burst onto the scene. With 300cc engines and in some cases three wheels, they somewhat revolutionised livestock farming in the UK. It meant an alternative to the Land Rover; and on the hills, it meant even aging shepherds could get around.

Through the years, like everything, quads got bigger and bigger. Now, the average quad bike sold is in the 450 – 500cc range, and it’s not uncommon for manufacturers to offer bikes that boast 1000cc blocks that are capable of upwards of 70mph.

So, is bigger always better? Japanese manufacturers Yamaha and Kawasaki have both revamped their smaller 300cc models, aiming them at entry-level customers.

We tested two to see what they had to offer.

The Yamaha is a good-looking, compact and responsive bike. However, some of the plastic is not as good quality as you’d expect for what isn’t that cheap a machine. It also looks as if it might bend easily if you had to nudge a gate or too.

Yamaha has stopped offering the 350cc model and now only offer the new Grizzly 300, saying that the new model is more than enough to handle the usual farm bike duties.

The bull bar at the front is made of metal but has a plastic cover on it that might prove futile in a farm situation. It doesn’t quite have the bells and whistles of the Kawasaki.

The Yamaha is quicker off the mark than the Kawasaki and is easy to drive. Although there’s not mush in top speed, the Grizzly seems to have the slightly smoother transmission, too. Suspension is good and on braking the bike is stable and feels safe.

The load racks are sturdy, and it looks as though it would handle a slug pelleter without too much trouble. Official load carrying capacity is 45kg, 15kg more than the Kawasaki.

Neither bike struggled with a Logic Snacker Feeder loaded with 350kg of cake and a couple of mineral blocks. We tested both in low and high box and the Yamaha did the run up the hill in quicker than the Kawasaki by roughly 1 second.

One considerable downside to the Grizzly is the lack of storage. There’s almost nowhere to put anything, unless you count under the seat, and even then it’s limited.

At the front, the Grizzly has double wishbone suspension, which felt stable enough over rougher terrain. If you’re thinking of mounting a slug pelleter or spray tank on the back it’s probably worth adjusting the swing arm rear suspension with the special tool provided.

Yamaha has come up with a neat idea for the parking brake. Like a lot of modern bikes, the park brake is now a flappy paddle that you engage or disengage.

On the Kawasaki, this is on the left hand side, and it’s not beyond the realms of fantasy to leave it on (in fact we did it a couple of times). On the Yamaha, it’s on the rights hand side instead, and you’re unable to work the hand throttle with it on, so you never forget.

The dash on the Grizzly only has three lights to indicate neutral, forward and reverse. Which, if you wanted to go slug pelleting or spraying, means you’d have to guess what speed you were travelling at. There’s also no way of knowing how much fuel you’ve got, apart from peering in the top of the tank.