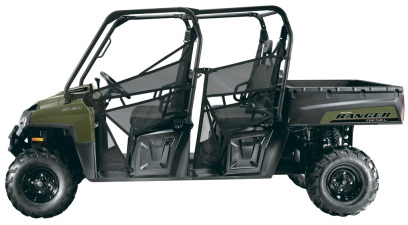 Polaris’s first diesel buggy is a welcome addition to the line-up. Its military look is appropriate – these machines are used by the US Army. And, while sharing most features with petrol Rangers, the added grunt from the diesel should make up for any loss in performance from the fuel switch.

Dual A-arms with 244mm travel at the front and independent wishbone suspension with 229mm travel at the rear mean the Polaris has slightly more front travel than the Gator, and this showed when tackling ridge and furrow at enthusiastic speeds. Even when loaded to the gunnels with woodchip bedding, the rear suspension hardly winced.

Like other Polaris models, the Ranger Diesel uses a Yanmar engine, this time in a 3-cylinder 904cc guise. It’s rubber mounted, so noise and vibration are kept well in the background, especially next to the gravelly sounding Gator.

The fully sealed, fixed-centre distance clutch driveline keeps water out of the clutches for stickier conditions. We found the quoted top speed of 35 mph to be conservative; it turned out to be more like 44mph.

The 24hp engine is perky and responsive, with little delay in pickup. Cornering and road travel was smooth and without fuss and nearly all obstacles, including the well-rotted muckheap, were tackled without engaging 4wd (done via an electric switch on the dash). Despite the confusing gear layout, it doesn’t take long to get used to the Ranger.

Servicing isn’t as easy as it could be, thanks to an oil dipstick mounted low under the bench seat. Other fluid levels are accessed via the front bonnet. A bonus is the 55A alternator that allows the operator to run multiple accessories, such as lights, cab heaters and fans at the same time.

The assisted-tip feature was a bit of an all-or-nothing affair – not great when you have nearly a tonne of woodchip.

The Polaris is better for the smaller driver, thanks largely to its adjustable steering wheel, but could be a bit cramped for larger operators. The flat floor gives plenty of space for a dog/sheep/goat on the floor. The dash is fully digital, with tripmeter and fuel guage as well as speedo. The netting at the side is fiddly – but equally quite handy for keeping everything in the cab.

The brand new Gator 855D gains power steering, a new cab, re-jigged front and rear suspension and a top speed of 52kph. But the most obvious change is a radical facelift. Gone are the cartoon-like curves, and the muted colour scheme means you don’t look like you’re a golfer.

The double A-arm front suspension has been completely revamped to give 203mm (8 inches) of travel over the original 127mm (5inches) in the previous model.

At the rear, the same configuration gives 229mm. Coils can be adjusted and there’s a rear sway bar, too. With this degree of travel, there is some wallowing around corners and on hills which takes a while to get used to.

One area where the Gator has come in for criticism in the past has been the tendency of the belt-driven CVT to slip and lose drive when wet. Now, the clutch is fully enclosed and can cope with water up to a depth of 56cm.

The three-pot 25hp Yanmar motor is powerful and torquey, however take-up isn’t quite as fast as the Polaris. Despite repositioning the exhaust and making it bigger, the Gator was still the noisier of the two on test. Hill starts were tricky, as the driver has to be able to left foot brake while throttling gently to stop roll-back.

Deere has done away with the crossbar in the windscreen meaning you can now get to the bonnet without having to take the windscreen off. But with the load rack mounted on the front, we still found it difficult and couldn’t use it on the open setting.

The toughened plastic cargo box has increased in size and can now handle a payload of 635kg, while the improved bull bar is robust enough to round up a field full of boisterous bullocks. Service access is good when it comes to checking oil and fluid levels.

The model tested was fitted with a bench seat, but two other seat options are available. The dash lacks the gadget-count of the Polaris, and it would be useful to have a speedo.

The diesel gauge reading is a bit dependent on the terrain. Since the new models still use the base XUV’s chassis, legroom is still slightly compromised by the intrusive foot wells.

Slow to pick up