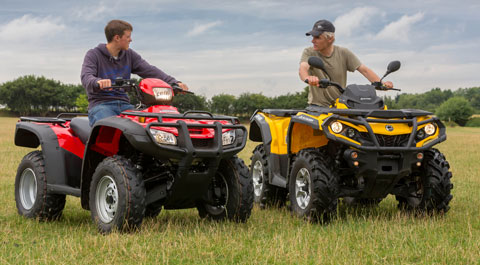 Can-Am refreshed its striking-looking 500cc Outlander ATV at the start of the year. David Cousins and Oliver Mark pitted it against that farming favourite – the Honda Foreman AT

No-one could reasonably complain that there’s a lack of choice in the UK ATV market.

The four big Japanese makers (Honda, Yamaha, Suzuki and Yamaha) slug it out for the bulk of sales. Then there North American brands, Polaris, Can-Am and Arctic Cat, plus the British-designed diesel-powered Dalesman and the UK-made, electrically-powered Eco-Charger. Not to mention Kymco from Taiwan and several Chinese makes.

For this FW head to head, we pitched the UK ATV market leader Honda against the latest model from Canadian maker Can-Am.

Honda launched its first ATV in 1970, a three-wheeled 89cc model called the ATC90. Its first four-wheeler came in 1984 and the first Foreman-badged model was launched in 1995.

Early models were aimed squarely at the leisure market, but UK farmers realised their potential for farmwork in the early 1980s.

It’s a division of Bombardier, a huge Canadian company that makes everything from Learjet planes to trains to marine engines. Bombardier Recreational Products, the fun end of the company, makes snowmobiles, jetskis and ATVs.

Can-Am has been selling in the UK for a dozen or so years. It has 18 UK dealers and its heartland is the steep slopes and boggy holes of northern England and Scotland. The companyls here are the 400cc Outlander 400 and 500cc Outlander 500, though the truly power-hungry can opt for a 1,000cc model.

Both ATVs have 500cc engines but the Outlander is a V-twin from fellow Bombardier company Rotax whereas the Honda is a single cylinder.

The noise from each engine isn’t that different, however the amount of power available from each does differ sharply.

Transmissions are both CVT but there are differences. The Can-Am requires you to move a sometimes notchy lever into hi or lo; then you just let your thumb do the driving.

The Honda is slightly easier to get into hi or lo, then you have a choice of full auto or going up and down the gears with a pair of buttons on the left hand side of the bike.

The banana-yellow plastics (you can have red if you ask…) and alloy wheels may not be to everyone’s taste, but the spec level of the Outlander makes it something of a Rolls Royce in the ATV world.

Three-stage handlebar and thumbstick heaters sit on Harley-Davidson-style handlebars (they’re 50mm longer than the Honda’s) and there’s a big, key-lockable cubby tucked below the rear rack.

The other three keys on the Can-Am keyring secure the fuel cap, immobiliser and ignition, and you can have a fifth if you want to automatically limit acceleration and top speed for less experienced operators. We like the tight approach to security but carrying four different keys for one machine means you need to be organised.

Life in the leisure market means Can-Am’s design team has hidden most of the Outlander’s metalwork under brightly coloured plastic. But where there is a bit of ag-spec protection – the brittle-feeling mudguard extensions, for instance – the Outlander still looks like it would come off second best to a breeze-block wall.

Honda, on the other hand, opts for super-flexi extensions that are better suited to farm life.

The rest of the Foreman conforms to all the conventional (and slightly rudimentary) agricultural design rules. One key fits all the locks and its smooth, Shogun-style range selector with a declutch button is a better bet than Can-Am’s chunky and clunky equivalent.

Unlike the Outlander you can switch between low and high on the move and, because it’s fitted on the left of the dash, you can thumb the throttle while you change ranges.

But the Can-Am does score top marks when it comes to kit carrying. Rear racks are rated to 90kg – 30kg more than Honda’s old-school tube-type set-up – and provide a solid base for strapping down slug pelleters. But the rear rail sits 980mm from the ground – 90mm higher than the Honda – so heaving stuff on board is almost as awkward as a pickup truck tailgate.

The Can-Am wins for towing, too. Its towbar is adjustable and sticks outside the rear wheels to make hanging trailers on the hook less of a back breaker.

It’s easy to see why most of Can-Am’s UK-sold bikes end up on Cumbrian and Pennine hill farms. Big, knobbly tyres and 260mm ground clearance make the Canadian a modern-day Shire horse stood against the comparatively Shetland-sized Honda.

To try to balance this, the Can-Am gets a three-stage power steering system called DPS, which can be adjusted to provide feather-light steering over boggy or rocky ground. The Honda’s handlebars take more wrestling with at near-stationary speeds but there’s little in it when it comes to faster-paced driving.

The Can-Am’s size also equates to weight – the Foreman is 50kg lighter on the scales than its brawny rival – so if you’re after something more manageable then pick the Honda. Both machines have systems to transfer power from one wheel to another in very slippery conditions, though it was too dry for us to test them thoroughly.

But having a single cylinder popping away underneath the seat means the idle is a little more chattery than the twin-piston-powered Can-Am, whose handlebars sit motionless at tickover. A jab to the throttle, though, forces the high-standing Outlander on to its haunches and the long suspension travel and large wheels make it bouncy at high speeds.

Downhill engine braking levels differed sharply between the two machines. The Canadian was bullied down slopes by our half-full snacker, whereas the Foreman’s engine braking practically brought it to a halt in mid-slope.

We like both of these . The Foreman is the safe choice – simple, serviceable and backed up by a big dealer network.

But if you fancy something a little different (and with a little more bling) then the Can-Am looks well made and should be up to the job.