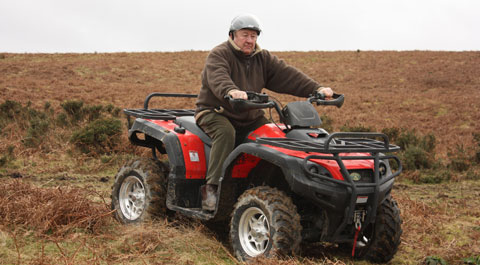 Diesel4ce has had a pretty creditable stab at putting together a workmanlike diesel ATV. Downsides are the inevitable diesel engine clatter and lower top speed, however if you have a job of work to do, this looks like a pretty reasonable way to do it. There’s also the prospect of much lower fuel costs and no more tedious ferrying of jerry cans.

Producing a civilised diesel ATV has proved a tough nut to crack. The big Japanese and US makers have steered clear of diesel engines over the years, largely because their biggest market (the US) still prefers petrol power.

But there have been some workable diesels. Polaris was the first to come to the party with its 11hp D-Bat, but it wasn’t the quietest machine on the block. The EcoQuad from Scottish firm EcoRider was a bit crude and noisy but the maker went into liquidation in 2010.

So the choice of available mainstream machines is now limited to the Arctic Cat diesel, which previous tests showed to be nice to ride and pretty quiet, though the physical size and £8200 price-tag probably limits its market penetration.

But at last year’s Royal Welsh Show, a new £5,950 diesel ATV slipped quietly into the machinery lines. Called the Diesel4ce (pronounced Dieselforce), it was produced by a new start-up company with Glyn Bowen (previously a sheep farmer and Arctic Cat and Kawasaki dealer) as co-director.

The Diesel4ce is an all-new design, Mr Bowen points out, though with some tried-and-tested components. However the biggest weapon in its armoury is the low price and easy availability of its fuel. And that should make it a machine that appeals to farmers in Europe, Canada South Africa and New Zealand.

Thirty dealers have already been signed up in the UK and Mr Bowen says he has had interest from foreign dealers.

“The market is crying out for a decent diesel ATV,” he points out. “Not just because the fuel is cheaper but because it means that you’re not always filling up jerry cans from the local petrol station.”

“A typical ATV on a livestock farm will clock up 3000 miles a year, so using diesel rather than petrol means a £1,000 saving a year,” he says.

That would no doubt get easier with familiarity, but a better lever guide system (maybe with a second decal higher up) would make life easier.