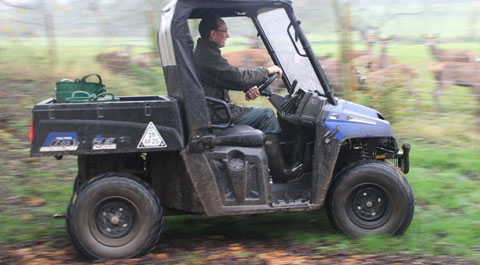 Plug it in, charge it up and drive it away – and no more humping cans of diesel or petrol about. Sounds good? Andy Collings visited a user of a battery powered Polaris Ranger EV utility vehicle to discover how it performs on the farm

For Antony Strawson, the battery-powered Polaris Ranger EV is proving to be a useful addition to his farm’s machinery line-up although he concedes from the start that such a machine is not likely to be everyone’s first choice.

Based near the village of Baumber, a few miles north of Horncastle, Lincs, Mr Strawson farms 650 ha (1625 acres) the majority of which is down to cereals, oilseed rape and sugar beet.

There is, however, a sizeable chunk of land in the middle of the farm which was once home for the Stourton Estate, its extensive deer parks, woods and lakes currently being renovated and replanted. And this is where the Ranger EV is playing a major part.

“I purchased the EV in January this year,” explains Mr Strawson. “I wanted a lightweight vehicle which we could use for general duties on the farm – feeding livestock, fencing duties and so on – but also one which could be used in woodlands without creating deep ruts and making so much noise it disturbed everything that was living there.”

Cab-wise, the controls are sparse – a handbrake which when applied isolates the electrics, a forward/reverse switch, a foot brake, throttle and, on the dashboard, a gauge to indicate how much charge is left in the battery.

Mr Strawson puts the EV on charge every evening and leaves it on all night. But when the on board charger unit failed he says he was advised to just charge until the batteries were full and then disconnect the standard three-pin 13 amp plug from the mains.

He also points out that the charging lead emerges from the cab beside the driving seat so the chance of driving off with it connected to a wall socket is hopefully minimised.

For stop/go work, such as putting in electric fencing stakes, the EV is ideal, he adds. It’s just a matter of jumping in and pressing the accelerator – no engine to start, stop or to leave running.

All of which is fine but, as with any battery powered vehicle there is always gnawing doubt about how far it will go and whether it will become marooned with flat batteries, and a long hike home.

Charging every day and not going beyond the farm gate usually avoids any unplanned walks but there is a larger and much more expensive problem looming for EV users.

Despite regular attention with the distilled water top ups the performance of the batteries gradually degrades to the point that, after about 1000 hours – it could be more or less hours – they need to be replaced with new ones. And that could be a £1500 bill, he says.

“We’ve currently clocked about 150 hours so we’re looking for new batteries in about five years at that rate,” says Mr Strawson. “Which is not something to be welcomed.”

In terms of electricity use he says he has not noticed any dramatic increase in consumption and he reckons the ‘fuel’ costs are very much less than would be used by a petrol or diesel version.

The Polaris EV has a 48-volt AC-induction motor rated at 30hp under its bonnet, the motor connects directly to the transmission which offers two or four wheel drive.

A high, medium and low button setting allows more or less ‘juice’ to be fed to the motor which results in a faster or slower speeds but at the higher settings an increased drain on the batteries.

There appears to be plenty of power to climb hills and wade through muddy patches although its rated payload capacity of 453kg is significantly less than say, the Polaris Ranger diesel. Even so, for Mr Strawson, the EV is more than just being a load carrier.

Anyone used to driving a petrol or diesel powered Polaris Ranger will be amazed at the EV’s lack of noise, he adds.

“We have deer which can be a flighty and it’s just so good to be able to drive quietly by them and also observe the wildlife remaining totally undisturbed,” he says. “But what they all think of the Broadwalk blue livery is quite another matter.”

The Polaris EV is a niche machine which will suit some farm enterprises better than others, says Mr Strawson.

“With a list price of over £10,000 it is quite a bit more than say, a petrol powered Ranger 400 and it has to be said that with an impending battery replacement cost, its rate of depreciation is also normally higher.”

Mr Strawson says it’s not a machine you could take slug pelleting all day long or perhaps spraying or top dressing, but for general carrying and transporting jobs he thinks it’s fine.