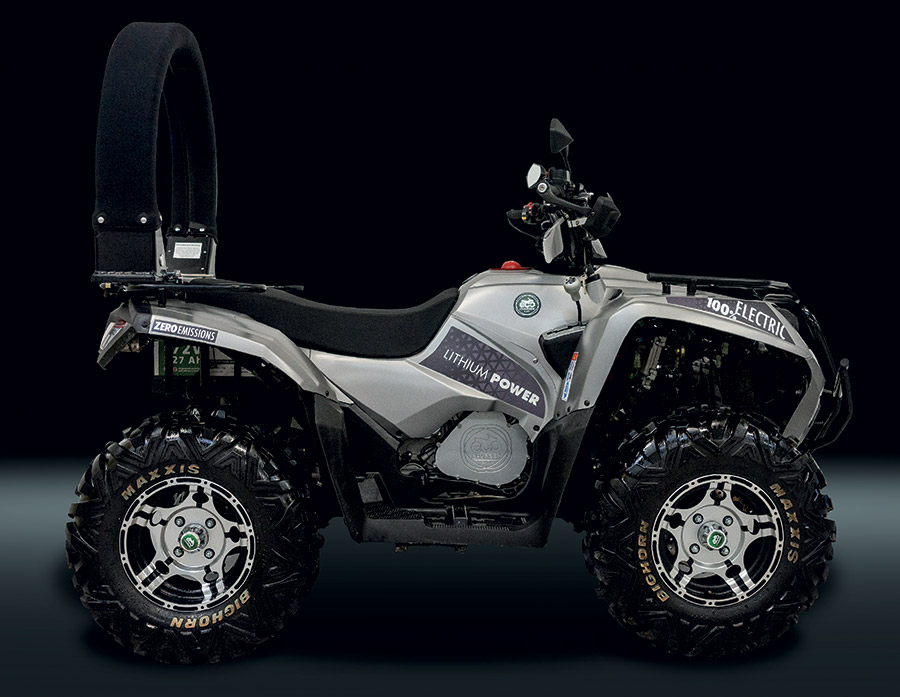 Eco Charger has slashed running costs and improved the driving range of its latest emissions-free electric ATVs thanks to new lithium-ion batteries.

The lightweight powerpacks in the Lithium Power now offer up to 65km on a full charge – 30% higher than the Devon firm’s previous generation Eliminator model – and have chopped two hours from the charging time.

However, interested parties must stump up more than £17,000 for the privilege, before clawing back the early outlay through the reduced running costs that Eco Charger claims can be up to 90% lower than petrol alternatives.

Savings could be even greater if the farm has its own electricity supply, and it means owners will no longer be burdened with the onerous task of filling jerry cans at the local petrol station.

Whether it turns out to be a cost saving against mid-sized petrol ATVs that are £10,000 cheaper will wholly depend on the number of miles it clocks.

The zero-emissions Lithium Power model uses a bank of four 27Ah lithium-ion batteries to run a 15kW motor – the equivalent of about 20hp.

This 72V system is topped up via an intelligent charger pack. It takes roughly three hours to fill from flat, though the first 70% is delivered in just over an hour.

This means 10km could be added during a quick coffee break, and regenerative braking helps provide a small amount of charging on the go, too. The batteries should last 10 years, according to Eco Charger, which is on a par with most electric cars.

Power is directed through a two-range automatic transmission, and there’s electric shifting between two- and four-wheel drive and a lockable front differential for particularly clarty conditions.

Suspension is provided by a dual A-arm arrangement with a standard adjustable shock arrangement, and ground clearance is 25cm.

The front and rear racks are rated to 30kg and the towing capacity is pretty conservative, too. Its stated maximum is 385kg – the same as a Honda Fourtrax 420 – though the company says it has the power to lug a lot more.

One of the biggest improvements in the switch to lithium-ion batteries is a massive weight saving. It has been trimmed from 496kg on the old Eliminator to 385kg, putting it far closer to petrol alternatives.

Electric power steering and LED lights are part of the package, while a remote-control front winch – standard on some of the competition – adds £850.

A seven-pin trailer light connection is another £75, plus there’s the GPS-based Defender security system to consider – it is £195 up front and another £10/month.