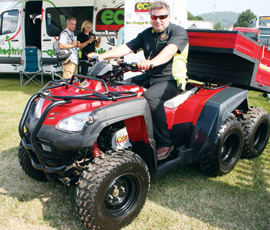 The perception that electric vehicles are worthy but slow is being challenged by a farm-based manufacturer and his growing range of Eco Charger quads.

Fred Chugg launched his two-wheel drive Dominator last year after putting out half a dozen examples for extended evaluation and says he has supplied 20 of the vehicles so far.

That has been joined by the four-wheel drive Eliminator, which can be converted in about half an hour to the six-wheel drive Terminator exhibited at the Royal Welsh Show.

The add-on section with its tipping load bay is bolted to the rear chassis and picks up drive from the crown wheel and pinion in the back axle. It can be separated in about 20 minutes, says Mr Chugg, and for added versatility can be fitted with a drawbar and used as a trailer.

An electro-hydraulic pump and tipping cylinder dispenses the contents of the load box, which is stepped to extend over the quad’s load rack. The back and rear sides drop down when simple latches are released.

The Eco Charger quads use mass-produced body panels and the chassis is also from an established quad design but heavily modified to accommodate the batteries and other electric drive components.

Unlike the chain-driven two-wheel-drive Dominator, the Eliminator 4×4 has shaft drive front and rear and is switchable between two- and four-wheel drive. Lockable diffs at both ends add to the machine’s traction capabilities.

“With the batteries mounted low and ahead of the centre of the quad, the Eliminator has tremendous grip and stability,” says Mr Chugg. “That means it can exploit the amazing torque that’s generated in the lowest range by the electric motor.”

A four-speed transmission provides top speeds up to 36mph. Range is typically 38 miles per charge, says Mr Chugg, depending on how much of the performance potential the driver uses.