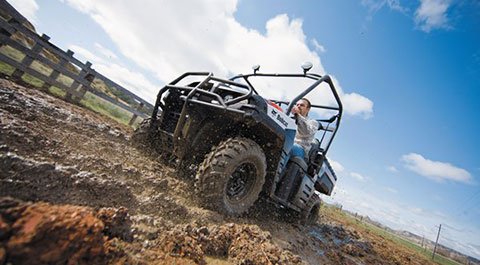 New additions to the selection of side-by-side ATVs are at opposite ends of the performance scale – Kubota’s RTV400Ci and RTV500 have modest 404cc petrol engines developing just 16hp while the John Deere XUV 825i Gator gets a three-cylinder engine twice that size pumping out 50hp for extra-rapid climbs to tend sheep on the hill.

Performance and specification of the two Kubota machines are broadly similar except that the RTV400Ci has an air-cooled engine driving through a ‘belt and pulley’ continuously variable transmission, while the RTV500 comes with a liquid-cooled motor and hydrostatic drive as used on the manufacturer’s diesel-engine RTVs.

The 404cc single-cylinder petrol engine in the RTV400Ci is a new unit with electronic fuel injection to avoid manual choke and cold starting issues. It drives through the CVT Plus inertia transmission.

Kubota’s RTV500 has a 456cc two-cylinder petrol engine with liquid cooling, which makes it a bit quieter; it also generates a bit less vibration, says Kubota, which contributes to a more comfortable, relaxed and less tiring ride for the operator. Easy driving characteristics come with the VHT Plus hydrostatic drive.

Both transmissions have high and low ratios to give a choice of speeds appropriate to different situations, and both are geared for a top speed of 40kph.

Operators who want a decidedly lively drive from their side-by-side ATV should get it with the John Deere XUV 825i Gator – it is engineered to be faster, more powerful and more agile than the current line-up.

Equipped with an 812cc, three-cylinder petrol engine with liquid cooling, the 825i has 50hp and a top speed of 44mph, with electronic fuel injection for easy starting.

A locking four-wheel drive system and fully independent, double wishbone suspension are also part of the package, with 203mm (8in) of wheel travel and up to 267mm (11in) of ground clearance helping the vehicle tackle uneven terrain. Power steering with anti-kickback is standard.

Instead of steel, the cargo box is made of a composite material – so it will not rust or dent; load capacity is 454kg.