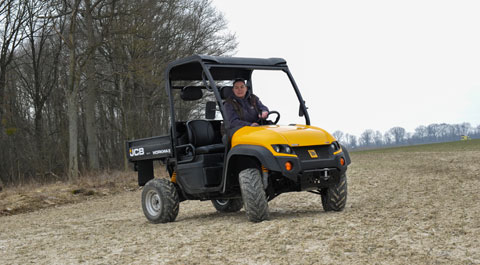 The smaller-engined Workmax was the baby of the test bunch. Tailgate locking could be easier and the load bay was the shallowest on test but it should be adequate for simple duties.

If it’s higher capacity you’re after then go for the 1000D version.

The JCB surprised the test team with its mud-plugging ability. It’s a real improvement over the previous models and was one of the best performers off-road, particularly when it came to keeping all four wheels on the ground.

On road and under load it struggled to set a fast time, but it was the least powerful of the test machines. Top marks go to the suspension – there’s a standard McPherson coils and dampers setup at the front but variable rate coil springs at the rear which squidge down half-way under load but won’t be fully crushed no matter how much you plant on the tail.

JCB controls are simple and clear. The instrument panel is made up of flick and rocker switches including electric engagement of the four-wheel drive.

Like the Kubota, forward gears occasionally proved elusive. Safety beeping can get annoying during start-up and reversing.

More from our farm buggy test: