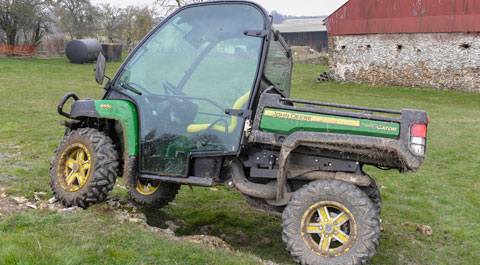 Rails running along the top of the thick plastic load bay make ideal lashing points, as do four hooks on the inside of the bay.

Lights are cage-protected and positioned on the back of the load bay where they are least likely to get crunched. The tailgate has a pickup style latch and, handily, there’s a ruler marked on the tailgate for any rough-and-ready measuring.

The Gator delivers weighty but easy-to-control and responsive steering, even with a heavy load in the back. However, the driving position is pretty cramped and the engine chatters loudly (even at idle).

It finished a respectable second in the up-hill dash, but it’s off-road where the Gator really bosses things. Nobbly tyres helped with traction.

It’s standard Gator fare in the cab with simple controls and switches. Transmission levers stand above a central tunnel between the driver and passenger.

Our test machine wasn’t fitted with an instrument cluster, but Deere has since given the Gator a facelift, adding gauges as well as a bigger alternator and fuel tank.

Surprisingly, the plastics had a cheap, flimsy feel to them – not what you’d expect from the Green Giant.

More from our farm buggy test: