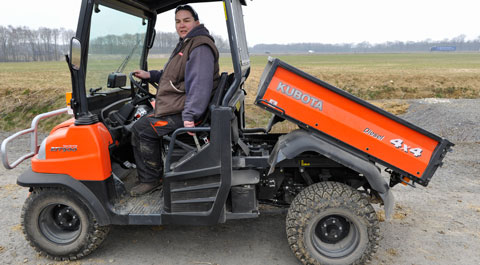 We loved the slam-shut-ability and easy opening of the tailgate.

However, the wafer thin tinwork looks prone to bending with a bit of weight applied, and, like the Mule, the rear road lights probably won’t last long. Bull-bars on the front toughen things up.

The Kubota was the only buggy on test with hydrostatic drive. Smooth, steady driving is the advantage, but it also means it’s sluggish out of the blocks – it took the wooden spoon in the hill climb.

It was the only buggy with any meaningful engine braking; too fierce, in fact – the driver must constantly man the throttle (even when slowing down) to avoid faceplanting the windscreen. Three gears are on offer, selected by an occasionally uncompliant lever. Score: 5/10

Gangly stalks are the order of the day in the cabin. They’re fine most of the time, but you can probably get enough leverage to bend them if you get irritated by struggling to find a forward gear.

The driver is treated to the luxury of a sprung seat and high driving position, but that makes for a high centre of gravity so you can feel like you’re manoeuvring Big Ben around lumps and bumps. Our test machine was also decked out with a front linkage and diverter under the load bay for snow ploughing duties.

More from our farm buggy test