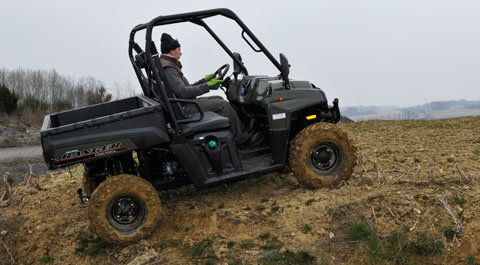 The build and design of the plastic load bay rivals that of the John Deere, but the Ranger is short of hooks for tying cargo do the deck.

We rated the pickup-style tailgate highly but the load bay was small and, because it’s not over-centred, wrestling to tip was hard work.

The Ranger would be the boy racer’s choice in our buggy line-up.

It’s nippy, agile and fun to drive off-road, but can also double-up as a true workhorse – it was fastest along our mile-long time trial.

You can also get it started while it’s in gear (provided you lean a boot on the break pedal). Its Achilles heel is service access under the bench seat – the lack of covers, mudguards and protection meant that after a day’s driving the battery terminals were caked in mud.

The handbrake is positioned on the left-hand side of the dash and the Ranger is the only test buggy to get steering wheel rake adjustment.

Most functions are controlled by flick switches, including the three-way rocker for one-, two- or four-wheel drive engagement.

More from our farm buggy test