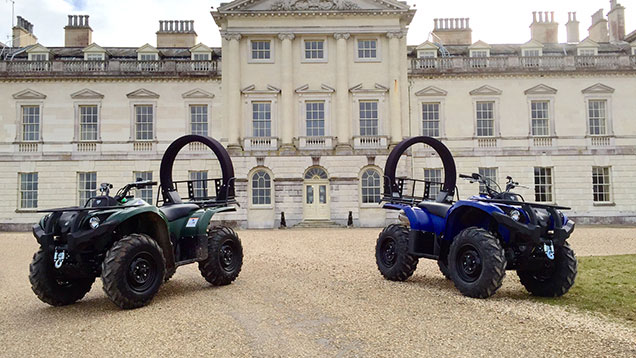 The first ATV Lifeguard rollover protection hoops to be sold in the UK have gone to the Duke of Bedford’s estate at Woburn in Bedfordshire. Both went on to Yamaha YFM 450 Grizzlys.

The point of the LifeGuard is to spread the weight of the vehicle evenly across the rider’s body to minimise injury and it Is rated for ATVs up to 500kg in weight. It’s now available from Bedfordshire company MKM Agriculture and costs £750.

The New Zealand-made unit uses a 15kg hoop that contains no metal.

Instead, it uses a series of segmented, thick plastic bricks held together by strong nylon cords.

The whole thing is covered by a neoprene-type cover and there’s a cord tensioning system to keep the right degree of resilience.

Deaths and injuries caused by ATV overturns in Australia and New Zealand are high, partly because farmers there use them so much but also because of the terrain.