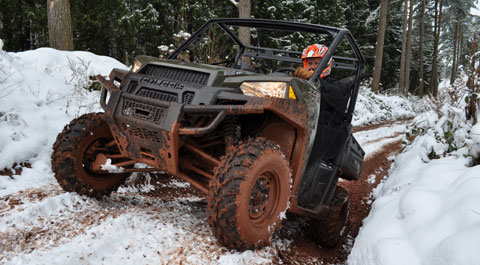 Polaris has unveiled its latest side-by-side utility vehicle – the Ranger XP900 – featuring a host of new features, many introduced in response to customer feedback on earlier models.

So what’s new? Well for a start the Birmingham designed but US-built petrol engine. This has been shifted to beneath the rear tipping load bed or ‘Bed Box’ as Polaris call it making the cab area 20% quieter at tick over. It’ll also remove the nasty heat sensation of under-seat engine models most apparent in warmer months.

The all new 875cc 4-stroke ProStar twin cylinder EFI petrol engine delivers 60hp compared with 50hp of the existing Ranger 800 and boasts a higher top road speed of 60mph versus 50mph for the more daring driver. Most importantly for operators the increase in engine size comes with a 20% improvement in fuel efficiency, says the company.

And this poses an interesting question. The XP900 is priced at £11,199 ex VAT – identical to the Ranger Diesel. Given farmers’ concerns over running costs of ATV and ORVs (Off Road Vehicles) why give the UK market another petrol option?

Polaris is insistent utility vehicle customers wanted more power delivery. The fact Polaris uses a Yanmar engine in its Ranger Diesel and may have little opportunity to tweak output may explain the quandary. However, there’s no doubting the XP900 power delivery is slicker than its heavy fuel sibling and will matter most when laden or towing over rough ground.

So what’s new? Well for a start the Birmingham designed but US-built petrol engine. This has been shifted to beneath the rear tipping load bed or ‘Bed Box’ as Polaris call it making the cab area 20% quieter at tick over. It’ll also remove the nasty heat sensation of under-seat engine models most apparent in warmer months.

Accessed by tipping the Bed Box, routine engine checks such as dipping engine oil are hassle free – so presumably will be dealer’s access when servicing. The plastic bonnet up front offers good access to radiator fluid.

Georg Winkler, Polaris product specialist speaking at the XP900 launch, said customer feedback had also led to other improvements for in-use servicing. For example, manual grease points have been added on dual arm suspension units that offer an extra 2.54cm of travel giving an obstacle clearing 30.5cm (12in) clearance.

Underneath, a redesigned 12.7cm longer wheelbase and more stable chassis sees all electric cables pass through a central tube. This is aimed at cutting out niggly electric faults due to ingress of water and dirt.

In base form the open cab and flat foot-well remained relatively unsoiled despite fording deep, mud-filled ruts on test – some taken with gusto. Adjustable 40/60 split front seat will suit more driver heights/builds, can accommodate three adults and now offers under-seat storage thanks to the engine move.

Over Land Rover’s Off Road Driving Course at Peckforton Castle, Cheshire, in snow conditions the Ranger XP900 proved every bit as sure footed as you’d expect from a Polaris. With a pallet-hugging 453.6kg Bed Box payload and 907.2kg tow capacity it would have been good to test the platform’s stability on the testy rutted tracks but sadly Polaris didn’t make provision.

Immediately it was apparent in biting wind and falling snow Polaris’s ‘Lock and Ride’ cab panels (including a multitude of screen, roof and door options all fitting pre-drilled mounts) would have been welcome – there’s even a cab heater upgrade. Base model cargo-net style ‘doors’ were a faff for short stop/start use but sturdy three-point seatbelts were user-friendly.

It’s hard to find a true like-for-like competitor for the XP900 but the initial drive suggests lusty power, electronic throttle control for smoother power delivery, and a longer, slightly higher chassis will improve ride and handling for most.

Despite the company’s foray into the leisure market with sports quads, Polaris UK territory manager Phil Everett pointed out utility vehicles such as the XP900 were the focus. That reflects recent sales figures that highlight ATV sales had fallen 16.6% while side-by-side passenger utility vehicles had risen 46.7%.

So, what’s the verdict? We like: Options for ‘Lock and Ride’ panels, quieter cabin, adjustable seats and a durable tipping Bed Box. We don’t like: Base model mesh safely door nets, electronic fuel gauge that’s hard to see on electronic central console and small throttle pedal.

But the fundamental question for users remains this: Given XP900’s price matching the Ranger Diesel do you go for fuel savings and ability to use red derv or opt for the extra power and speedier delivery from the XP900’s new 875cc petrol power unit? For now, the jury’s out.