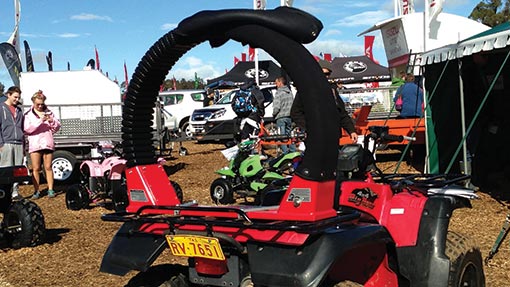 A clever rollover protection system for ATVs, which has been available in Australia and New Zealand for several months, is finally set to come to the UK.

ATVs are widely used in both those countries and rollover accidents are common.

The Lifeguard was designed by a New Zealand farmer-engineer four years ago and has been on sale in both countries for about four months. Some 600-700 units have been sold in that time. Now importer Matthew Tiplady plans to start selling them in the UK. Prices have yet to be set but are likely to be about £800.

“This is the world’s first flexible crush protection device for quad bikes and ATVs,” says Mr Tiplady. “It’s designed so that when the bike turns over the device will bend and it will not crush the person by the weight and the bar itself.

“It’s completely flexible, with two cables going through it. It will flex with the turning over of the bike.”

The design can hold up an overturned ATV of 350kg and is simply bolted to the rear carrier. It can be fitted to most brands of ATV.

The first unit will be coming to the UK next week for testing, with UK importer details coming after that. We’ll keep you posted.