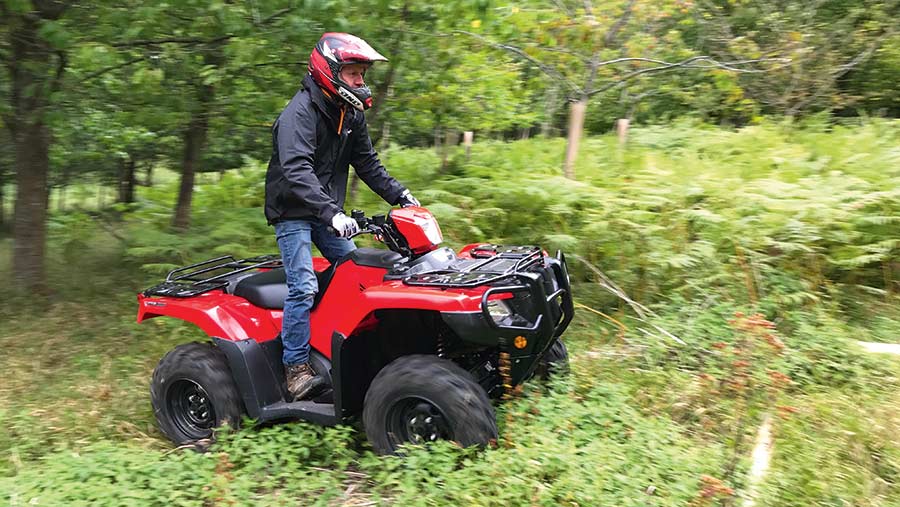 ATV market leader Honda has replaced its long-serving Foreman 500 with a new model that brings more power and a slicker automatic transmission.

The new 520 runs a 518cc engine – up from its predecessor’s 475cc – that will deliver 4% more torque at low-ish engine speeds to provide marginally punchier acceleration and better pulling power.

However, it’s worth bearing in mind that Honda ATVs often look underpowered compared with their rivals (some of which pack 40hp or more) because the Foreman’s mechanical transmission tends to be far more efficient than belt-driven equivalents.

The latest increase in engine capacity is the result of emissions regulations that forced a minor redesign, but the single-cylinder motor has remained largely unchanged.

In fact, only the bore has grown – common components including the block, crank and pistons are unaffected.

That news should please Foreman buyers, as the engine is relatively uncomplicated with a dry sump and overhead valves.

The company also claims its counterbalance shaft gives near twin-cylinder vibration levels, though from our experience it does little to eliminate body shudders at low revs. 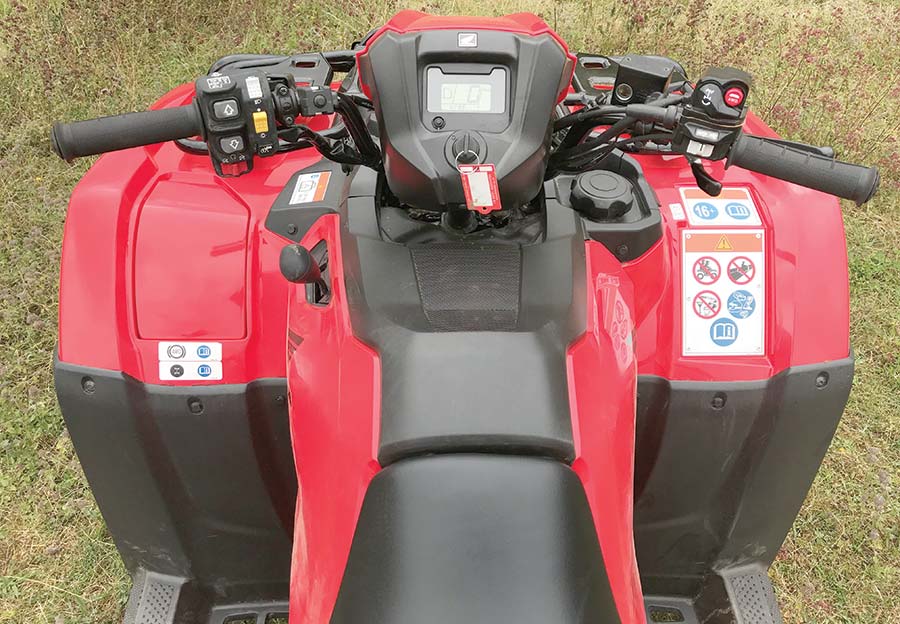 Other 520-specific improvements include a brighter handlebar headlight, a beefed-up bull bar and redesigned front grille.

The rest of Honda’s ATV updates apply to both the Foreman 520 and Fourtrax 420.

The latter remains the UK’s best-selling quad bike and is a major contributor to the 71.6% share the company enjoys in the 300-499cc market.

The most significant change applies to the electric shift and double-clutch (DCT) gearboxes, where gear shift mapping has been fine-tuned to deliver better-timed, slicker changes.

In auto mode, sensors monitor the throttle opening to automatically decide whether to work in sports mode – where it holds on to gears up to 3,500-4,000rpm – or cruise mode, where revs rarely exceed 2,000rpm.

The base-spec model with manual transmission will continue to use foot-operated shifting. 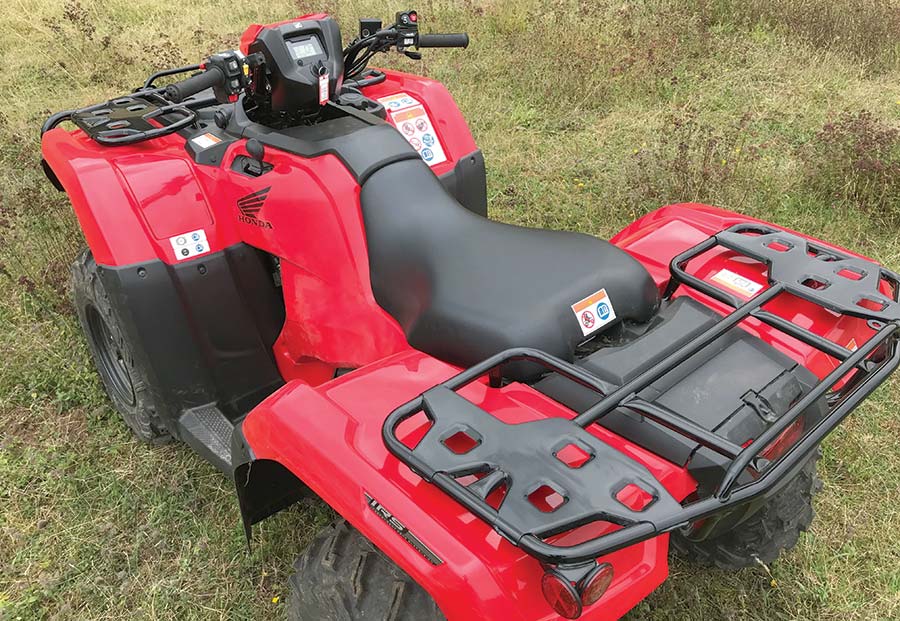 Honda remains the obvious exception among the big ATV makers in its unwavering commitment to the mechanical five-speed transmission, whether in electric-shift or DCT guise.

In comparison, most of its rivals now favour the buttery-smooth acceleration offered by a belt-based CVT.

Honda also claims its engine braking is far superior, although in our most recent comparison tests the difference in this area is less stark than it used to be.

The other improvement in the transmission department is the ability to override automatic gear shifts.

This means the rider can now down-shift when approaching a hill without changing the driving mode and, after a few seconds, the bike will revert to automatic shifting.

On electric-shift and DCT models, Honda has also improved the way in which reverse is selected.

This was previously a clunky, two-handed affair that involved dropping to neutral and pulling the brake while pushing a button.

There’s now an electric trigger on the back of the handlebar.

Riders can engage reverse from any gear at speeds of less than 3mph.

New guards now cover the full length of the suspension arms and also protect the driveshafts and CV joints.

Front and rear racks have been redesigned to provide extra lash-down points. 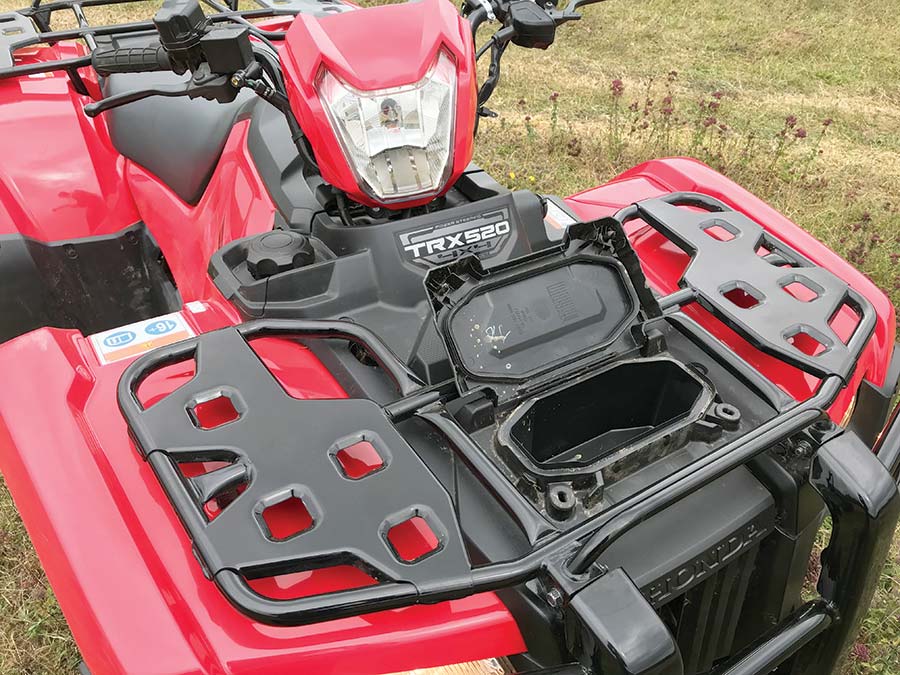 They’re now powder-coated, which means they should last longer, and have a greater surface area, although their maximum carrying capacity remains pretty modest.

You can see all the specs and prices for ATVs, UTVs and pickups on sale in the UK in our annual buyers guide.

We’ll also be running a comparison test of the Fourtrax 420 against four of its rivals – Suzuki’s King Quad, the Yamaha Kodiak, Can-Am Outlander and Polaris Sportsman – in the 18 October issue of Farmers Weekly.