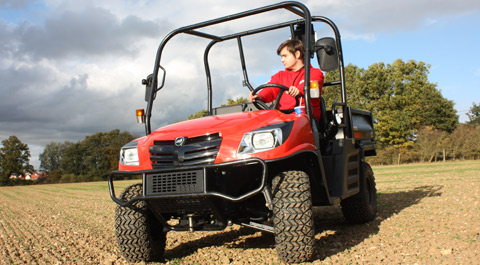 There’s not much wrong with this latest Mechron. It’s well made, amply kitted out and looks like it can take some hard usage. Like all farm buggies, the top speed won’t take your breath away and the CVT transmission can be hesitant at edging-forward speeds. But, overall, we were impressed.

Korean company Kioti is a relatively new name in the farm buggy sector, though its compact tractors have been sold in the UK for more than 10 years.

Well, anyone can scuttle short distances on the road in a non-homologated farm buggy but, strictly speaking, you’re not supposed to unless you have the right equipment.

However the latest version of the Mechron has what it takes to be squeaky clean in road traffic terms – indicators, rear lights, a horn, seat belts, a number plate and even a tax disc.

This is a big vehicle with room for three people. The two passengers get a bench seat but the driver has a proper tractor-style seat that can be adjusted according to their weight.

In front is a wide dashboard with a surprisingly large amount of kit on it. The headlight and indicator switches look like they came from an upmarket car, as do the speedo, fuel and water temperature gauges.

In fact the whole vehicle looks well made, though the plastic bonnet at the front is a bit flimsy.

Start the three-cylinder Kioti diesel engine and you get the usual clatter and rattle you’d expect in this sort of vehicle. But push up the revs and the noise dies back to something quite civilised and liveable-with.

The lever that engages forward/reverse and hi-lo went into its slot without protest (not the case on many farm buggies), which was impressive.

There’s that characteristic CVT hesitation as you start to edge forward, but that soon disappears one you get under way.

On the suspension front, Kioti has gone for a bump-absorbing set-up with MacPherson struts at the front and double A arms at the back.

This worked really well, allowing the Mechron to be driven at unwise speeds across bumpy ground without scaring the occupants.

The steering is quite slow geared, so you find yourself doing a lot of bus-driver-style twiddling at all but high speeds.

However that means you don’t need to go on a body-building course to turn the wheels at near-stationary speeds – it’s all quite light.

Top speed is 40kph (24mph). Not enough to make your heart go pitter patter, but more than adequate to give decent progress on road and field.

A tippable load area at the back of the machine takes half a tonne of payload. Lifting it up is no problem and a clever stay automatically slots into position to keep it there.

Lowering it is a little trickier, as you have to manually release the stay first.