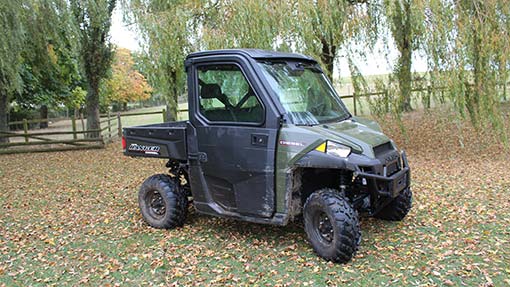 It wasn’t that long ago that a farm buggy was considered luxurious if it had a windscreen and plastic hood to keep the worst of the rain off.

Now manufacturers are ramming them full of goodies, from sound systems and satnavs to air conditioning and climate control.

The latest company to up its farm buggy offering is Polaris with a revamped version of its Ranger Diesel. It gets a new chassis, bodywork and engine, and has more options than your local Chinese takeaway.

The biggest structural change has been to shunt the engine back from under the seat to below the rear load-bay. This has reduced the din in the cabin and, according to Polaris, improves weight distribution. The US maker has also decided to go for a Kohler engine instead of the Yanmar found in the old one.

The cab has received plenty of attention, too. It now uses the Lock and Ride system – seen on the XP900 – which allows different pieces to be clicked on and off. That means buyers can opt for a simple setup and then add things such as a rear window and doors at a later date. 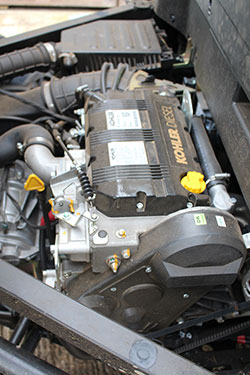 Polycarbonate, glass, tip-out and half windscreens are on offer, as well as several roof options, interior liners and different doors. The windscreens have also been recessed into the cab frame, making them look much slicker than the old ones that were slapped on the front.

As well as luxury gadgets such as power windows, heaters, radios and even satnav, it is more general features such as the lift-off sealed doors that make a real difference. These are far more integrated and no longer feel like an afterthought.

Useful under-seat storage is accessed by simply flipping up the seats, which also reveals the fuse box. The battery sits under the storage tray on the driver’s side and is pretty easy to get to.

There are also plenty of neat electrical connection points for things such as snacker feeders, spinners or other add-ons that need to be hard-wired to the battery. A double alternator boosts output to 110amps to make sure there’s enough power to cope, too.

Whereas before there would be an angry buzzing if the driver had inadvertently left the handbrake lever on, Polaris has now incorporated this into the gear lever, meaning it can’t be left on accidentally. It also saves replacing cables.