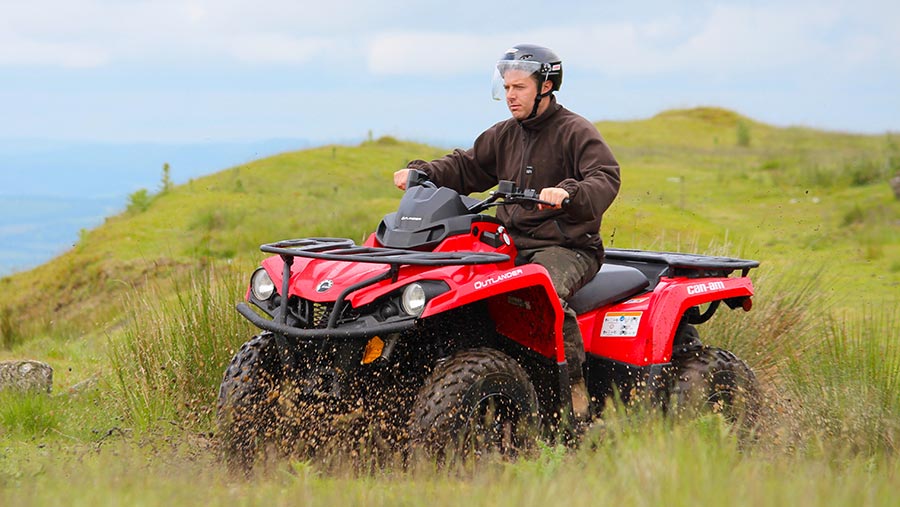 It might sport 450 branding on its bodywork, but the Outlander actually gets its power from a 427cc single-cylinder engine, built by sister company Rotax.

Despite the lower-than-suggested displacement, this develops a rather healthy 38hp, making it one of the more sprightly bikes in our test. Those looking for even more go have the option of a 48hp 570cc V-twin.

In a similar vein to most other ATV makers, Can-Am has chosen a belt-type CVT driveline to put this power to the ground. Drive is engaged via a clutch with one-way bearing, which promises swift uptake of drive as well as decent engine braking.

Can-Am is a relative newcomer to the UK market, but it’s already starting to make a good impression. The Outlander 450 is one of the most comfortable bikes around, with a light electric throttle, smooth uptake of drive, and plush suspension.

However, the transmission isn’t as positive as some of its rivals’ and it can squirm around during heavy towing. The low base price is seriously attractive, but it’s important to note this doesn’t include power steering.

In practice, it delivered fairly well and we couldn’t get it to run away down steep hills, even with a fully weighted trailer in tow. However, it wasn’t quite as sharp as the offerings from Yamaha and Suzuki.

The only time we rattled its composure was during our uphill towing test, where the back end tended to squirm around a little.

As for the four-wheel-drive system, this can be switched on and off on the move via a switch on the handlebars, providing the wheels aren’t spinning.

When four-wheel-drive is activated, power gets distributed via a fixed drive to the rear axle and an auto-locking diff at the front. This works progressively to alter the amount of slip according to the conditions, locking completely when traction really runs out.

To further improve its off-road credentials, Can-am has fitted trailing-arm independent rear suspension. The idea is that this causes the wheels to articulate in a vertical plane, rather than the butterfly motion of a wishbone system.

This did seem to work as it gave a particularly silky ride, even on some seriously harsh surfaces.

Another of the bike’s strong suits is a Sherpa-shaming carrying capacity with a 590kg towing limit, 109kg loading for the rear rack and 54kg up front.

Can-Am has taken a slightly more high-tech approach to some of the control systems on its bikes, starting with the coded key-fob system.

The primary aim is to make the bike harder to pinch – dealers can deactivate stolen keys and the electronics make the bike fairly challenging to hotwire. But individual keys can also be programmed with different speed limiters, so the performance can be restricted for inexperienced riders.

It sounds complicated, but in reality it’s no more of a fiddle than carrying a key around. We’ve no idea how it will fair after prolonged exposure to mud and water, though.

The techy electrics also extend to the throttle, which is a fly-by-wire affair rather than a standard steel cable. This means it’s incredibly light to operate and won’t freeze solid in the winter.

The electric throttle is light and responsive, while four-wheel-drive is engaged with a thumb switch

For those who like to carry plenty of paraphernalia around with them, the Outlander has some decent storage, with a large, sealed box sunk into the rear rack.

Cleverly, this doesn’t interfere with the use of the rack or its lashing points. However, it is inaccessible if a sprayer or slug pelleter is mounted on the back.

Our test bike didn’t come with power steering (the only tested bike not to), but apart from very low speed manoeuvring we didn’t really notice. It’s available on the higher-spec pro model, though, which has a £6,416 price tag.

This also comes with a few fancy extras such as alloy wheels, bigger tyres and a harder-wearing seat.

There’s also the option of a road-legal bike, but this has the top speed limited to 60kph. 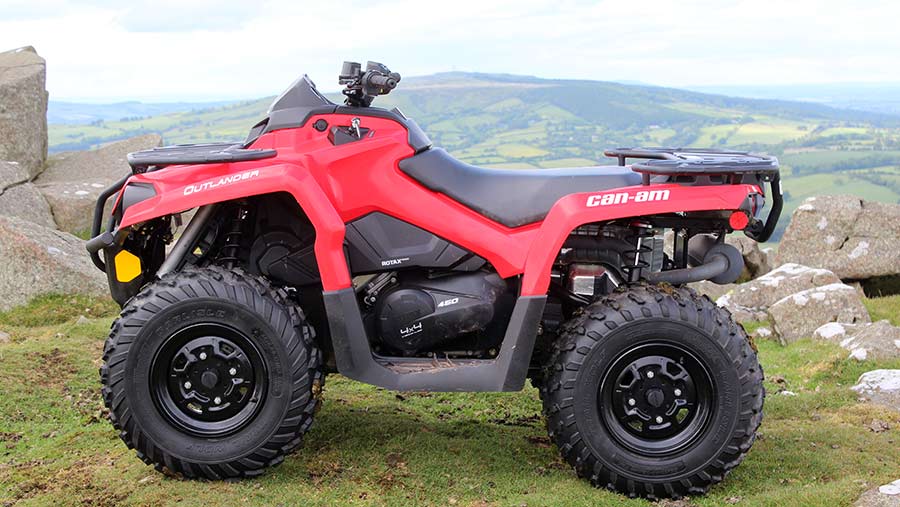