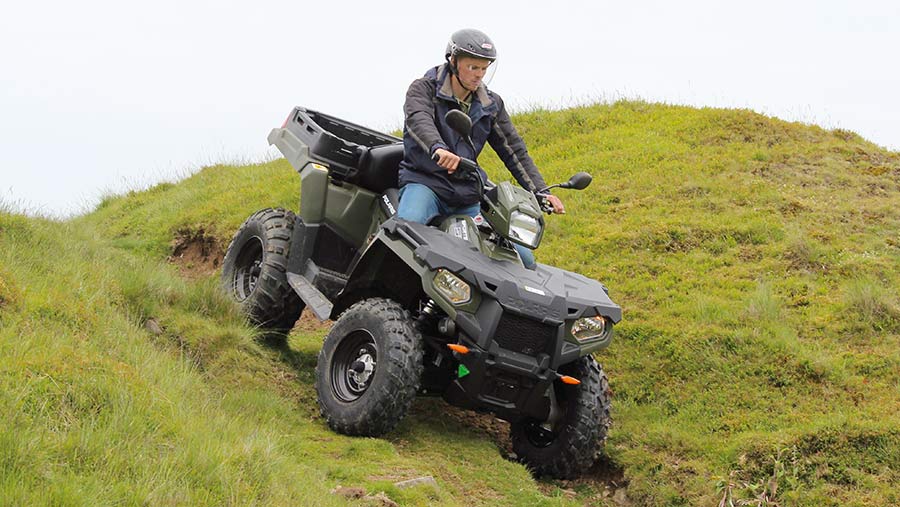 Polaris doesn’t build anything near a 450cc ATV – the lowest-powered machine in its line-up still carries a 567cc engine that provides a far-from-princely 44hp.

That put it some way above the rest of the group, and its extra firepower was unmistakable – it blitzed our two-mile, trailer-pull hill route in a pickup-rivalling time and a full 12secs ahead of the silver medallist.

However, potentially enviable pulling performance is betrayed by some particularly unpleasant handling. The electric power steering is featherlight and, at speed, has a habit of wavering scarily like a weathervane in a blustery gale – we’d much prefer to see it stiffened up or disengaged above 20mph.

Polaris’ Sportsman range starts with the 44hp 570, though we were provided the performance-grade X2, with fancy extras over the regular farmer-spec machine. Its test results were a story of extremes and, for many buyers, its unusual two-seater arrangement and tipping rear tray will be useful. However, we were unconvinced by the build quality and poor positioning of vulnerable components such as the battery.

It packed far more power than the rest of the group, which played out in its bullish towing performance, and the descent control system also offers supreme downhill control. Downsides included unpleasantly light power steering at speed and an uncomfortable seat.

Power take-up is a little slower than some of the other machines we tested, but on the flip side, it retains exceptional speed discipline when descending steep slopes. The active descent control (ADC) system allows it to creep downwards at just 1mph by a combination of braking and locking the drive to all four wheels. This keeps things almost unfathomably calm, particularly when compared with the run-away XP1000 buggy we tried last year.

While on the topic of transmission, it’s worth noting that the drive belt is a serviceable item that should be checked every 200 hours and changed at 750 hours if worked hard and towing frequently – an inconvenience many livestock farmers could probably do without.

Sadly, there is a chance it will suffer from other mechanical gremlins in the future, mainly because of the way the components have been packaged. The battery sits on the chassis and is fully open to the elements, while cables, electric junction boxes and brake leads lie unnecessarily exposed to tall undergrowth or pressure washer jets.

On the plus side, it is the only one to run a proper lockable rear diff. This means it can be opened to operate a single-wheel-drive system, which is ideal for scrabble-free manoeuvres and no doubt contributes to its mega-tight turning circle. For more traction, it can easily be shunted to two- or four-wheel power by way of a handlebar switch. 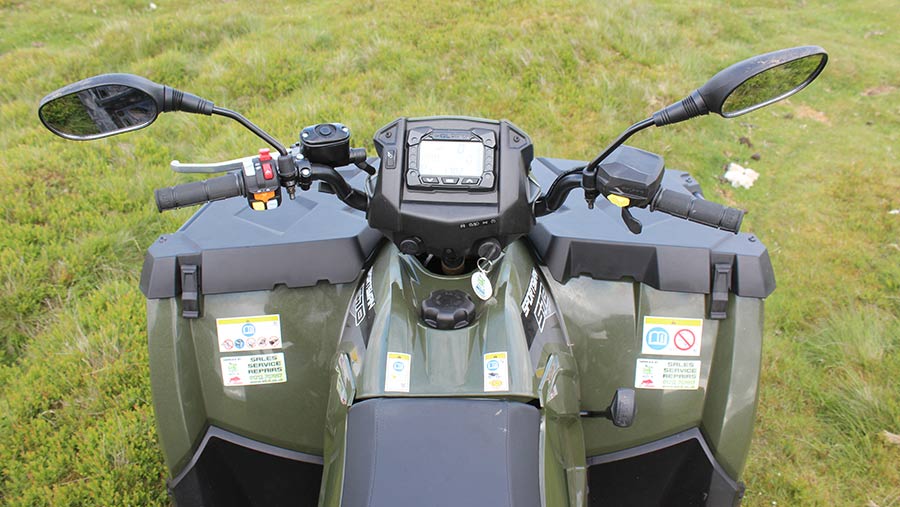 Polaris sent us the slightly fancier version of its Sportsman 570 (the X2), which meant we had a tipping box and second seat, rather than the plain and simple rack arrangement.

Whether it’s a benefit or not depends on the machine’s use – perks of the four-sided tray include carrying feed, but the tipping element is all but useless considering it can carry little more than a couple of shovel loads. It also makes mounting items such as slug pelleters a touch more complicated. 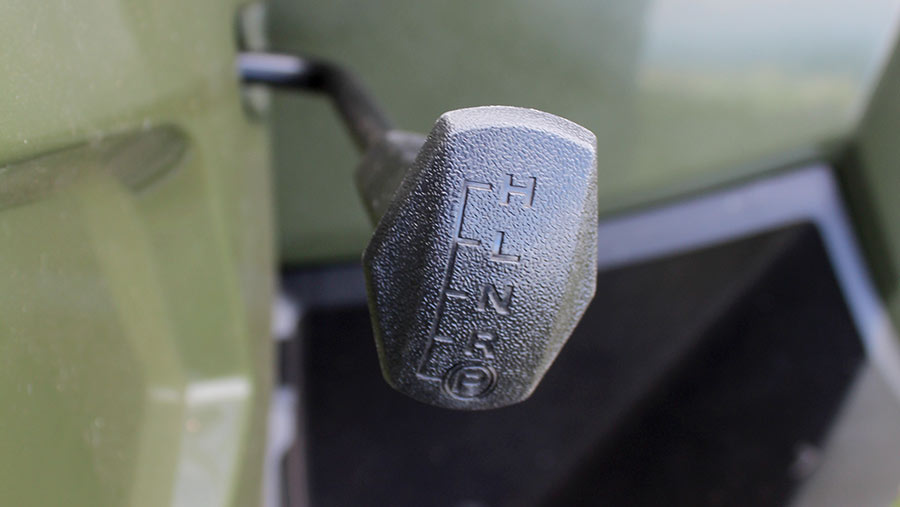 However, carrying capacity is an impressive 180kg – far exceeding that of its rivals – and the plastic cover over the peculiarly shaped (but quite handy) front tray adds another 41kg to the total carrying capacity.

The second seat arrangement is neat, with a couple of unfolding manoeuvres revealing a pop-up throne where the passenger can legally straddle the driver. 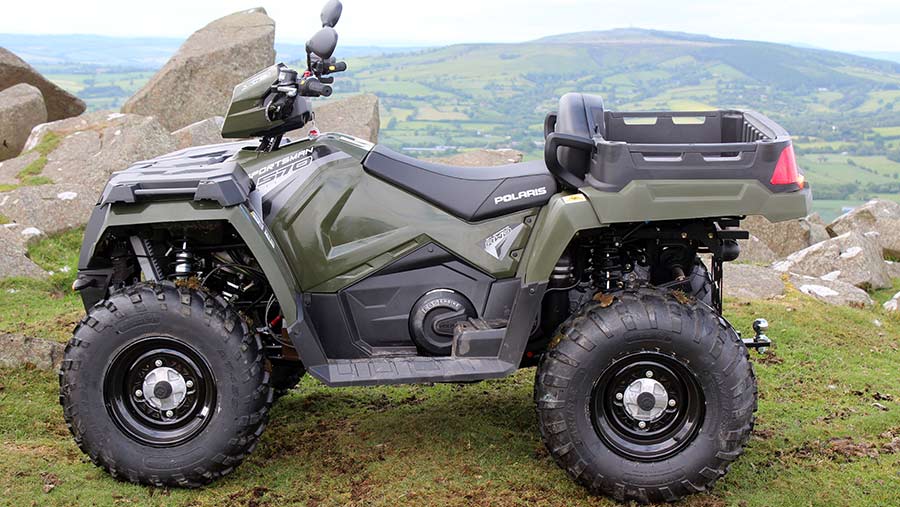 In fact, the co-pilot’s pew is significantly comfier than the driver’s, where extensive saddle time has a habit of causing an achy backside. The gear selector can also instigate unwanted pain – it’s unfortunately positioned half way into the footwell and has a habit of kneecapping unsuspecting riders as they embark from the left side.

On the plus side, the Sportsman comes road legal from the factory. This means it’s already kitted out with a full set of lights and has a tow socket as standard.

It also carries a handlebar-mounted 12V socket to power retrofitted items, but you’ll want to keep plenty of lose cable to avoid yanking it out on every hard-right turn.