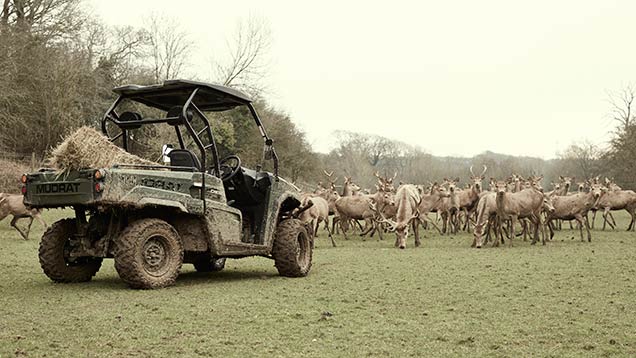 Farmers in the market for a diesel farm buggy now have another name to add to their potential shopping list – Mudrat.

Designed specifically to tackle the UK’s challenging conditions, the Welsh-built Mudrat has been given an 800cc Perkins diesel engine, a CVT transmission and a tipping rear load deck that can carry 300kg.

Max power is a fairly steady 20.4hp, but that’s enough for it to haul around an 800kg braked trailer and propel it to a top speed of 40kph.

To slow it back down again Mudrat has fitted hydraulic disc brakes on all four corners and made sure it has engine braking to stop it running away on steep hillsides.

It has switchable two- and four-wheel drive, too, as well as long-travel independent suspension that gives it 28cm of ground clearance.

Because the buggy has been purpose-built for the UK market it also comes with right-hand drive as standard, a full road-legal lighting kit and LCD dash complete with speedometer.

It is also pretty reasonably priced compared with some other UTVs on the market at £10,000.

The Mudrat is the brainchild of Zimbabwe-born entrepreneur and founder of Inov-8 sports shoes, Wayne Edy.

After setting up an empire selling sports shoes in more than 65 countries and providing footwear to some of the world’s most successful athletes, Mr Edy invested in an organic deer farm near Cardiff.

Here he ran both Polaris Ranger and John Deere Gator buggies, but wasn’t impressed with their performance – so he set about building his own.

The Mudrat has been in development for the past 18 months and Mr Edy has traveled the globe to source the best parts for his new machine.

It has a British-designed Perkins engine, the CVT transmission comes from Canada and the first part of assembly takes place in China. The machine is then finished at the firm’s workshops in Bridgend.

So far there are six Mudrats on UK farms and the firm is busy setting up a UK dealer network.

There are also two other petrol models in the range – a 600cc with full steel body and pokey 1100cc version that develops 72hp.