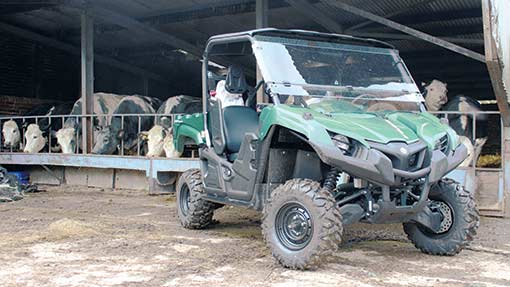 Yamaha has launched a petrol-powered farm buggy to rival the likes of John Deere’s Gator and the Kawasaki Mule. Oliver Mark tried it out.

Being able to brim the fuel tank with red diesel has always been the big appeal with farm buggies over ATV equivalents. Yet Yamaha is one of several makers reluctant to offer models with oil-burning engines because petrol-loving Americans still account for such a large slice of sales.

The Japanese manufacturer’s latest model – the Viking – is no different. Built in America, it’s a bigger-chassised, more powerful replacement for the Rhino, which is now extinct.

Motive power is provided by a single cylinder, 700cc lump buried beneath the load bay. It’s a proven four-stroke engine – the same one has been used in Yamaha’s big ATVs for the past few years – and should add a bit of kudos if you decide to sell it on.

However, the petrol power comes at a price – its reported economy hovers around the 20mpg, which doesn’t compare favourably with a diesel equivalent ekeing out closer to 35mpg.

The single-pot engine drives through a two-speed CVT transmission and Yamaha’s stepless design has a history of being gentle on drive belts. Top speed is a tad more than 50mph if you’re brave enough.

Drive can be two- or four-wheel drive depending on the position of the dash-mounted dial. A full twist engages the diff-lock.

Most rival machines that can carry three people do so by fitting a bench seat in the front. Yamaha’s three-seat design has plenty of plus sides – it’s a comfortable ride and, at 1.6m wide, it’ll also be more difficult for thieves to cram in the back of a white van.

A passenger handlebar runs in front of the second and third seats and lower legs are protected by some feeble knee-high, blown plastic doors. It’s probably easiest to whip these off if you’re hopping in and out frequently. The same can be said of the big plastic headrests if you want a good view of the tail.

At the front the plastic windscreen, which looks easily scratched by hawthorn hedges and stray brambles, has a big fold to allow it to flap down. A nice idea, but the fold runs straight through the driver’s eyeline.

The rest of the layout is better thought out, with the speed selector and handbrake positioned on the dash to keep the floor space clear. Like most buggies and ATVs the gear stick can require a bit of firm-handed encouragement before it slots into the desired channel.

The Viking’s 686cc engine is a torquey thing and far quicker off the mark than a oil-burning equivalent. The big problem is the racket caused by the engine, which is noisier than most diesels on the market.

It makes a good towing vehicle, though. Book figures suggest it’ll haul 680kg on the hook and the metal load bay will take another 270kg. 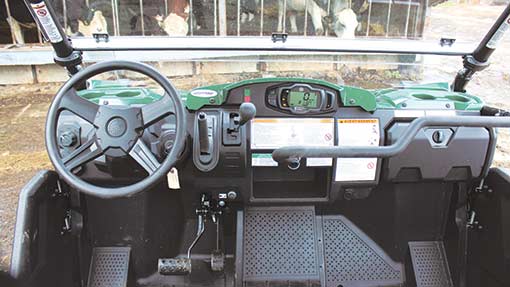 Elsewhere, there’s 300mm ground clearance and cushioning comes from double wishbones front and rear with 205mm wheel travel. There’s also five-stage adjustment of the suspension and electric power steering. It means if you hit a rock it won’t yank the wheel out of your hands.

The Viking has a powerful little engine and spacious cabin, but it’s too noisy and we’d probably go for a diesel for convenience.