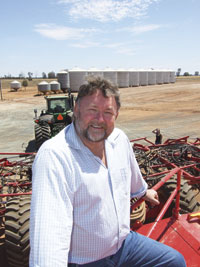 Forget your 8m or even your 12m drills – compared to some of the equipment working in North America, Australia and other big corn-growing areas, they wouldn’t even touch the sides of the gate leading into the fields.

We’re talking 25m (82ft) drills here, with outputs that would see most UK arable farms drilled up by lunchtime.


The manufacturer of these giant machines is Seed Hawk, a Canadian company in which Vaderstad has a 49% stake. The company’s pneumatic drills are aimed at farmers who grow cereals across thousands of hectares.

Key to achieving such working widths is in the design of the toolbar. This not only has to be strong enough to withstand the drag of the coulters across its width but also to pull a 21t seed and fertiliser tank behind it.

Seed Hawk points out that it is the triangulation design of the tool bar which provides the required strength – plus the use of 60mm high-tensile steel box section.

For transport most models fold to a not-exactly-modest 8.6m width and a height of 5.4m, although the manufacturer suggests that this could be reduced slightly by removing wing tyres.

Supporting the tool bar when in work position are dual-wheel caster units on each section. These allow ground contours to be followed across the width of the drill – not usually too much of an issue for UK growers. 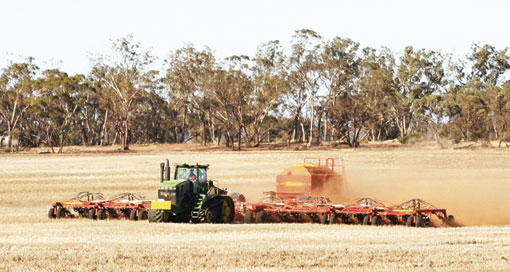 Most of Australia’s cereals are direct drilled – to cultivate the land would be to lose valuable moisture and organic matter and also be an added cost.

Seed is placed at a depth of about 10mm where there is organic matter from previous crops. It is a testament to the design and operation of the coulters that this relatively shallow depth can be achieved across the whole width of the drill.

The coulters on the Seed Hawk are tines which pivot from the main frame and are pressurised into work by hydraulic rams. Seed and fertiliser are delivered to the ground from separate tines, each able to trip back should heavy rocks be encountered. Once sown, the seed is pressed by a pneumatic tyre with up to 140kg downward pressure.

They is a choice of row spacings – 25cm being the narrowest with 30cm and 37cm also available. Like the drill itself, these could be a bit wide for most tastes in our part of the globe but are what husbandry techniques require here.

Seed and fertiliser metered from the trailing tank is blown to the coulters by air generated by two large hydraulically powered fans. Combined with the pipework for the coulters and for the folding rams, the seed and fertiliser tubes create a spaghetti of pipes and connections. There can be up to 84 coulters on board the tool bar, each with its own fertiliser and seed pipes

One intriguing option is the SBR (seed between row) hitch which helps the operator position the drill so that the coulters place the seed between last year’s rows. This means the stubble can be left longer, there are fewer problems with crop residues and more soil moisture is retained.

Graham Barron, based at Ungarie, New South Wales, grows 20,000ha (50,000 acres) of crops, of which about two thirds is cereals. He uses one 24m and two 18m Seed Hawk drills to plant his crops, pulling them with tracked John Deeres.

A good day’s drilling with the 24m is considered to be about 200ha (500 acres) with seed and fertiliser bulked out to the drill and loaded by auger. The additional output of the two 18m drills can see a total of over 580ha (1200 acres) drilled each day.

Now that’s a daily output that would put a smile on any big UK farmer’s face.